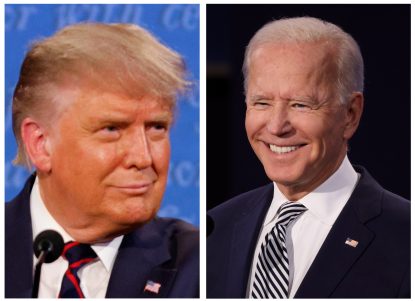 Nearly six hours after the event, just before 1 a.m. Oct. 2, Trump tweeted that he and first lady Melania Trump had tested positive for the coronavirus.

The breaking news brought tweets offering prayers for their quick recovery, including from the cardinal, who after thanking the president and Biden for joining the dinner virtually added: “Please also join me in praying for the President, @FLOTUS Melania Trump, & all who suffer from or are affected by Covid-19.”

Cardinal Dolan, in the benediction at the virtual Al Smith dinner, said: “God bless America, land that we love. God bless our two candidates, keeping them safe and vigorous these important weeks of democracy in action. God mend thine every flaw — the sickness, the tensions, the continued challenges to justice, peace, unity, protection of life and international reconciliation.

“God bless the Al Smith Foundation — its board and benefactors, and most of all the people in need, especially women and children, we’re so honored to serve.”

Speaking first, Biden said, “These are difficult times for our country,” citing “a pandemic, a recession, a reckoning on race, a changing climate. With each crisis, our faith is tested.”

Biden said his Catholic faith has helped him through darkness “as I’ve had to bury pieces of my soul deep in the earth, and eventually found purpose to live a life worthy of those I’ve lost.

“And throughout my life in public service, I’ve been guided by the tenets of Catholic social doctrine. … We have an obligation to one another. We cannot serve ourselves at the expense of others. We have a responsibility to future generations. And that’s the charge before us today.”

“Mark my words,” Biden continued, “one day we’ll look back in awe not at how far we fell but at how fiercely we fought back as a country.”

Biden said “that sense of hope and possibility” reminded him of the first time he met Pope Francis, in 2013 when he attended the papal inauguration at the Vatican, and two years later when he and then-President Barack Obama welcomed the pope on his visit to the United States. Biden’s oldest son, Beau, had died four months earlier, and the pope met with Biden and his family “to help us see the light through the darkness.”

Trump said, “When the virus came in from China, we saw New Yorkers respond with the same grit and tenacity, courage and selflessness that have always defined this city that we love so much. … And of course the Catholic community, and the men and women of the New York Archdiocese, answered the call … in Catholic schools, hospitals, shelters, soup kitchens and food pantries, you served with the supreme devotion to your fellow citizens.”

“As president,” he said, “I want to thank the Catholic community for the magnificent generosity you showed in America’s hour of need. We mourn for all of those who lost a loved one and in their memory we will defeat the virus.”

“From the very beginning of our republic,” Trump continued, “Catholics have uplifted and enriched our nation beyond measure.”

“Your work,” Trump said, reminds us of an essential truth: “In this country, civil society, and especially our religious institutions, are an essential foundation of American freedom.”

Trump also talked about his administration’s defense of the “sacred right to life” and advocacy to “advance school choice.”

He said he was honored to recently nominate “one of our most brilliant legal minds,” Judge Amy Coney Barrett, to the U.S. Supreme Court.

“We will not stand for any attacks against Judge Barrett’s faith,” Trump said. “Anti-Catholic bigotry has absolutely no place in the United States of America.”

The gathering is dedicated to the memory of Alfred E. Smith, a four-term governor of New York, who in 1928 became the first Catholic to be nominated by a major political party as the Democratic candidate for president of the United States.

“Sadly, the campaign was sullied by anti-Catholic, anti-Irish, anti-immigrant bigotry, and Al Smith lost big time,” Cardinal Dolan explained. “Yet never did he lose his hope, his dreams or his compassion for those he called the little ones — neither has this dinner in his honor since 1946. Even during this tough year, with all of us united against COVID-19, we still come together,” albeit virtually.

Presided over by the archbishop of New York, as chair of the Al Smith Memorial Foundation, Cardinal Dolan also offered the invocation, opening and closing remarks. He was joined in the foyer of his residence by co-host Mary Callahan Erdoes, the foundation’s vice chair.

She thanked donors for their benevolence amid the pandemic. “You didn’t ask for your money back; you kept giving more.” Noting the event is entirely underwritten by the board of directors, “every dollar raised goes to New York City’s neediest,” she said.

The virtual event closely followed the dinner’s traditional program, although this year due to COVID-19 restrictions and precautions, there were no guests present, nor myriad tables covered in white linens.

The national anthem was sung in the sanctuary of St. Patrick’s Cathedral by Nadine Sierra, who has performed as a soprano in the Metropolitan Opera. This year’s dedication was bestowed upon the coronavirus pandemic’s front-line workers and essential workers.

“In these past months,” Cardinal Dolan said, “we’ve seen lives lost, jobs lost, homes destroyed, families disheartened. We’ve sacrificed so much and we’ll continue to sacrifice so much, for as long as this pandemic lasts.”

“We’ve lost a lot, we’ve given up a lot, but through it all we’ve held onto our faith,” the cardinal said. “And tonight, we pay tribute to those who have helped us through. They’ve strengthened our faith, they’ve earned our trust and are deeply deserving of our gratitude — New York City’s front-line workers.”

Chicoine is news editor of Catholic New York, newspaper of the Archdiocese of New York.

NEXT: Bishops offer good wishes, prayers for Trumps, all suffering from COVID-19