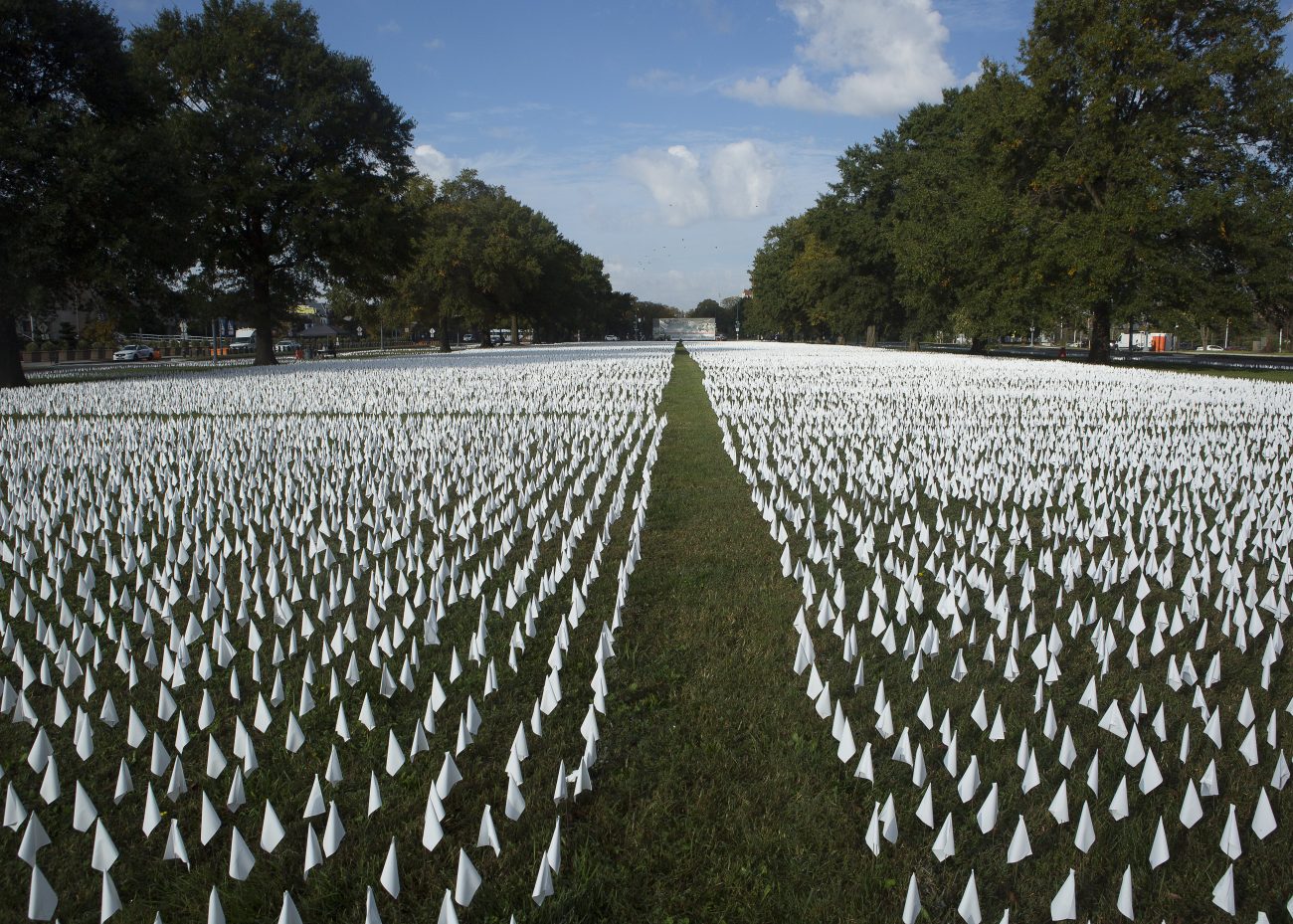 A temporary memorial for the victims of COVID-19 is seen near the armory in Washington Oct. 23, 2020. Each day the artist adds new flags to the installation as the death toll rises. As of Oct. 29, about 228,000 Americans have died from the disease. (CNS photo/Tyler Orsburn)

WASHINGTON (CNS) — The feast of All Souls’ Day, when Catholics remember and pray for the dead, has weighted significance this year when so many have died of COVID-19 and the pandemic’s restrictions have prevented usual funeral services and final goodbyes in person.

As that number continues to rise, it is no surprise that on All Souls’ Day, Nov. 2, many parishes and dioceses are remembering these deaths with Masses, prayers or special altars.

Conversely, because of pandemic restrictions, some dioceses also have had to cancel, or at least modify or livestream, their usual All Souls’ Day commemorations often held at Catholic cemeteries.

In the Los Angeles Archdiocese, scaled back All Souls’ Day plans are continuing and they will include, as in previous years, aspects of the Mexican celebration Día de los Muertos, or Day of the Dead, celebrated Nov. 1-2.

A vigil prayer service will be celebrated by Los Angeles Archbishop José H. Gomez on the evening of Nov. 1 in the outdoor courtyard of the Mausoleum of Calvary Cemetery and Mortuary in Los Angeles.

At the livestreamed prayer service, the archbishop also will bless the eight altars on display paying tribute to those who died in the past year, a typical feature of Day of the Dead celebrations. One of the altars will specifically commemorate COVID-19 victims.

For Concepción Sanchez, who is placing photos of her father on the COVID-19 altar, the archdiocesan event is a means of closure.

She said the Day of the Dead tradition has been something her Mexican family has done privately for the past six years since the death of one of her brothers, but this more public commemoration is something her whole family is happy she is doing since they did not get to say goodbye in person to their dad, grandfather and husband, Blas Mena Espinoza, who died a month and a half after contracting the coronavirus. He was 68.

One of Espinoza’s sons contracted COVID-19 in July at his work, from someone who was asymptomatic, and it quickly spread to most of the family, to other brothers and their mother, who also has diabetes. Espinoza went to the emergency room in August where he was intubated; he died at the hospital Sept. 8.

“We thought he would get better. We didn’t get to say goodbye,” Sanchez, a mother of three, told Catholic News Service Oct. 28. She plans to place photos of her dad and his favorite hobby, woodworking, on the altar.

“He wanted the family to be together all the time,” she said.

Sanchez chokes up when talking about her dad, who came to the United States in his early 20s and worked in construction. She said remembering him at this event is a small way to celebrate his life, but it also joins her family with others who have experienced a similar loss.

“In a bigger way, it’s for everyone, too,” she said, noting the COVID-19 altar will have a globe at the top representing all those around the world who died because of the coronavirus.

Sister Rosalia Meza, a Verbum Dei sister, who is director of the Office of Religious Education in the Los Angeles Archdiocese, said even though the prayer service and altar blessings will not draw as many people as it has in previous years, it is still, or even more so, “very significant.”

“It’s simple with a lot of meaning,” she added.

She said some parishes in the archdiocese are doing beautiful things to honor the dead, which is a way to show that even when family members and friends cannot be together in person, “the people we love are remembered … the connection is there.”

“I think we are going back to simple things,” holding onto faith, when typical rituals and ways of being together to comfort each other aren’t possible, she said.

Sister Meza speaks from experience since her grandfather died in late October in Mexico and she was unable to attend his funeral.

Paulist Father Larry Rice, who lives in Austin, Texas, and is currently between assignments, said the Day of the Dead celebrations in Texas have been curbed due to the pandemic, but even when they are simply done at home — the Catholic expression of the domestic church — these celebrations serve as reminders of connections between loved ones living and dead.

He said the church’s celebration of All Souls’ Day is a reminder that the “bonds of love and affection that we form in life do not dissolve in death,” quoting a prayer from the Mass of Christian Burial.

All Souls’ Day was initiated in the 11th century by St. Odilo of Cluny, the abbot of the Benedictine Abbey in Cluny, France, who urged those in his monastery to pray for the souls in purgatory every Nov. 2.

This practice spread to other Benedictine monasteries, and local bishops also began adopting it. A few centuries later it was instituted by the Catholic Church as a day of prayer for the souls in purgatory, following the Nov. 1 celebration of All Saints’ Day.

In the United States, there is one parish named after the initial All Souls’ Day promoter, St. Odilo in Berwyn, Illinois. On the parish website, it says that pilgrims who visit the church can obtain indulgences for the souls in purgatory.

This year, the parish will have Masses in English, Spanish and Latin on All Souls’ Day, but due to pandemic restrictions, participants need to register by phone or online to attend.

PREVIOUS: ‘It is an attack on everyone’: Bishops react to Nice basilica murders

NEXT: Group sets goal of eucharistic adoration in 1,000 parishes on Election Day