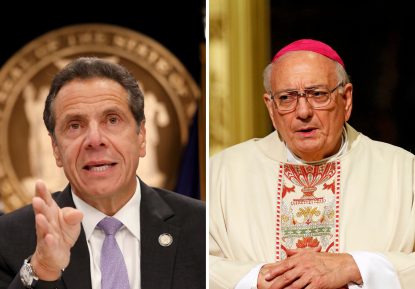 “The executive orders this week have left us with no other option than to go to court,” Brooklyn Bishop Nicholas DiMarzio said in a statement.

“We vehemently disagree with the capacity limits being placed on us. They are disrespectful to Catholics who have only been abiding by the rules,” he added. “We do not agree with such limitations because they completely disregard the fact that our safety protocols have worked.”

On Oct. 6, Cuomo announced new restrictions on houses of worship in response to a spike in COVID-19 cases in densely populated ZIP codes he has identified as “hot zones.” He said the state has created three zones — red, orange and yellow — each with different restrictions, including on the size of congregations.

Some Catholic parishes in the Brooklyn Diocese are in the “red zone,” meaning their churches are being forced to reduce capacity to a maximum of 10 people inside at one time, and some are in the “orange zone,” where only 25 people at one time can attend Mass. A “yellow zone” designation means a 50% capacity.

In a news release announcing the lawsuit, the diocese said Cuomo’s new limits “arbitrarily” reduce capacity at Catholic churches throughout the New York City boroughs of Brooklyn and Queens, “locations of which have played an inconsequential role in the hot spot zone COVID-19 spikes.”

Having to reset the attendance for churches that have the “capacity to accommodate many worshippers” in order to comply with the red zone and orange zone rules “when we have had no significant cases, impedes our right to worship and cannot stand,” the diocese said.

Prior to the churches reopening July 5 for weekend Masses — after being closed for Mass for 16 weeks — the diocese said it worked with a former commissioner of the New York City Office of Emergency Management, Joseph Esposito, to develop a safe reopening plan for all churches to keep the faithful safe from the effects of the virus.

The church restrictions came a day after Cuomo had a news conference ordering closures of public schools and Catholic and other nonpublic schools in certain ZIP codes that reportedly have double, or in some areas quadruple, the New York metro area’s average COVID-19 infection rate of 1.72%.

In the Diocese of Brooklyn, for example, this means the closure of St. Athanasius Catholic Academy, Our Lady of Grace, St. Edmund Elementary School and Good Shepherd Catholic Academy.

The Brooklyn Diocese has retained litigation attorney Randy M. Mastro, a partner in the New York office of Gibson, Dunn & Crutcher, to represent it in this case.

“Public officials have a sacred duty to do right by those they serve, but this is simply wrong and wrong-headed,” Mastro said in a statement. “If this latest executive order stands, parishioners won’t be able to go to Mass this Sunday, even though the diocese has done everything right to ensure safe conditions in its churches.”

If this happens, the diocese’s religious community “will be denied its most fundamental right — the free exercise of religion –for no legitimate reason whatsoever,” he said. “That’s why we’ve gone to court — to prevent this injustice from occurring — so we’re asking the court to block this executive order from going into effect as applied to the diocese’s churches.”

The diocese said the state “has completely disregarded the fact that our safety protocols have worked and it is an insult to once again penalize all those who have made the safe return to church work.”

Massgoers wear masks during Mass and sit 6 feet apart, with a row roped off in between, and they stand 6 feet apart in the line to receive Communion line.

Pastors have installed hand sanitizers at the entrances and have ensured churches are cleaned and sanitized after Masses,” the diocese said. “A tremendous amount of time has been devoted, as well as resources and expense, to enforce these strict requirements to help ensure the safety of all.”

Joseph Zwilling, director of communications of the Archdiocese of New York, issued a statement supporting the lawsuit and echoed what the Brooklyn Diocese stated about Catholic parishes cooperating with health officials and strictly following all safety protocols for their churches, schools and other facilities. He, too, called Cuomo’s closures arbitrary and unfair.

“Catholic parishes throughout the Archdiocese of New York — indeed, throughout the entire state — have been able to safely and successfully reopen for Mass and the sacraments, thanks to careful planning, strict adherence to safety guidelines, and the full cooperation of our clergy, parishioners and parish staffs,” Zwilling said in a statement released late Oct. 8.

“So it is unfair to arbitrarily close, even temporarily, churches which have been operating without a spike in coronavirus cases simply because other institutions have not yet been able to do so,” he added. “The Diocese of Brooklyn’s lawsuit seeks to defend their First Amendment right to continue to safely worship and operate their parishes, and we support the Diocese of Brooklyn in their effort.”

NEXT: Supreme Court does not reinstate abortion drug restrictions