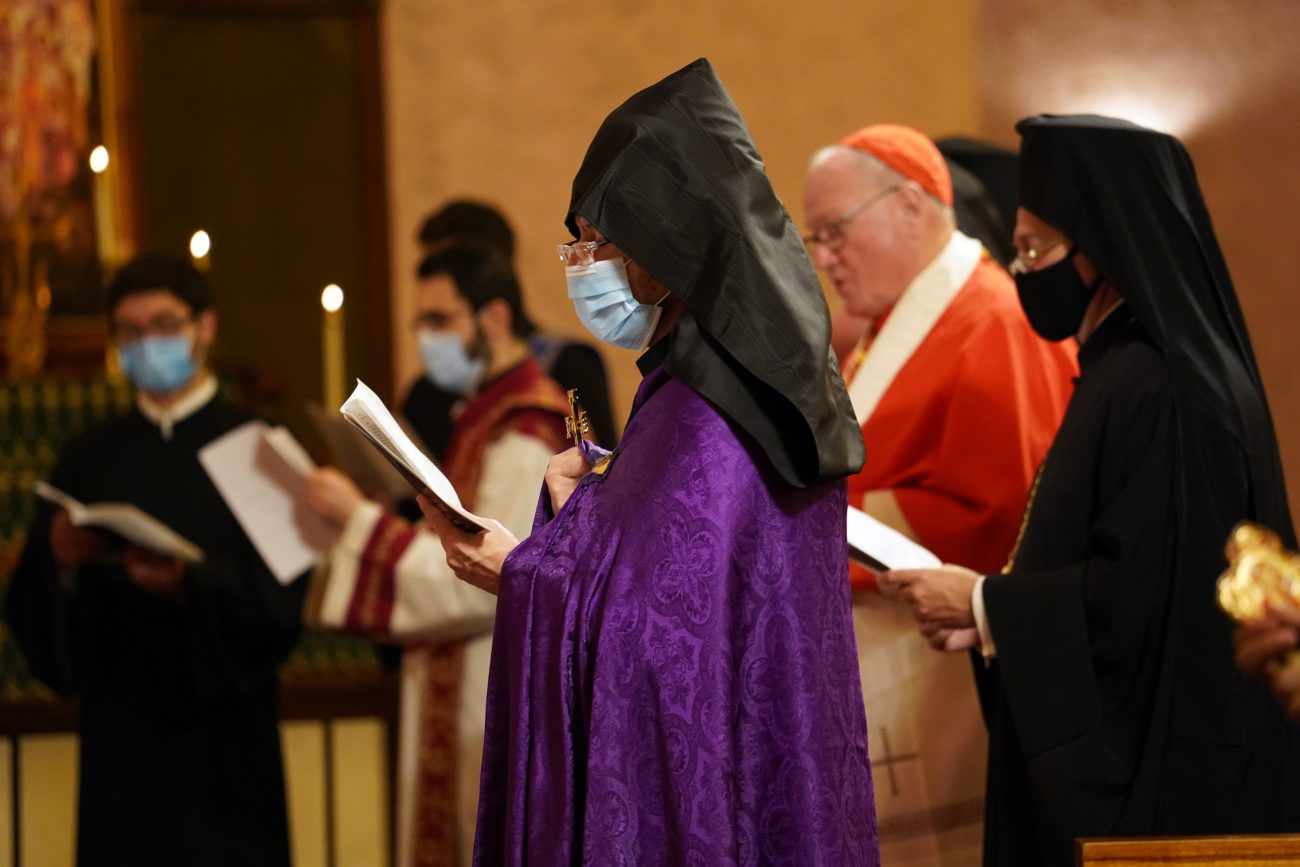 Bishop Daniel Findikyan, primate of the Eastern Diocese of the Armenian Church of America, is joined Oct. 21, 2020, by other religious leaders in the sanctuary at St. Vartan Armenian Cathedral in New York City for an ecumenical prayer service for peace and justice in Armenia, Artsakh and the world. (CNS photo/Gregory A. Shemitz)

WASHINGTON (CNS) — Cardinal Timothy M. Dolan of New York called for “the shield of faith” to protect Armenian Christians caught in the conflict between Azerbaijan and Armenia.

Speaking at an evening prayer service Oct. 21 at St. Vartan Armenian Cathedral, Cardinal Dolan referenced a recent New York Times article in which Manushak Titanyan, an architect, spoke of her fears for her three sons at the front lines.

“Well, think again, ma’am,” Cardinal Dolan said. “Your faith and your lamentation are marked on our hearts.”

“Sometimes we believers are dismissed as naive and idealistic and unrealistic dreamers. Nonsense,” he said. Those who count on military might “are the Pollyannas, because these things never work. The shield of faith. The artillery of the spirit. That’s our strategy.”

“Jesus whispers to us this evening, ‘Take courage. I conquered the world,'” the cardinal added during the service, which was livestreamed.

The “Ecumenical Service for Peace and Justice in Armenia, Artsakh and the World” also included remarks by Greek Orthodox Archbishop Elpidophoros and Bishop David of the Coptic Orthodox Diocese of New York and New England.

Holy Savior Cathedral in the disputed region of Nagorno-Karabakh, the Armenian enclave also known as the Republic of Artsakh, was seriously damaged from shelling earlier in October. Built in 1888 and considered one of the largest Armenian churches in the world, it had been restored in the 1990s.

Archbishop Elpidophoros called the shelling “destroying the past in order to dominate the present.”

“What is happening is no less than the erasure of Christianity from this part of the world,” he added. Armenians have a “sense of extreme abandonment, and there is a sense of solitude.”

As a Christian community, “we understand the meaning of suffering,” said Bishop David, “just as cities with minority Christian populations in Egypt have suffered for generations.”

“As people who suffered the first genocide of the 20th century, the Armenian people still boldly choose the cross,” he added. “The world is once again witnessing as the Armenian community sets an example of love and strength.”

Bishop David called for an immediate cease-fire as well as “the right for a safe existence and freedom of worship.”

The latest military conflict in the region, which began in late September, is rooted in territorial and ethnic disputes in the Caucasus Mountains along the Caspian Sea that go back to the previous fighting in the 1980s, and for more than a century before that.

Azerbaijani troops have been capturing territory in Nagorno-Karabakh, which is considered part of Azerbaijan under international law.

Armenia won the last military conflict in 1994 with more than a million residents displaced, and Nagorno-Karabakh has been considered independent since then. Fears are that the war could widen into a conflict including Turkey and Russia, risking the security of oil and gas pipelines that serve world markets.

In Washington the same day as the prayer service, two Senate Democrats hailed an incremental recognition of the Armenian Genocide of 1915 — not by the State Department, which so far has not endorsed resolutions passed by both chambers of Congress — but by the Library of Congress.

Librarian of Congress Carla Hayden announced that catalogue records of the systematic killing of 1.5 million Armenians by the former Ottoman Empire will be changed to “Armenian Genocide” rather than “Armenian massacres.”

“Since the State Department has thus far refused to recognize this historical fact, the Armenian Genocide marks the first time in U.S. history that both houses of Congress have declared a genocide, but the Executive Branch has not,” said U.S. Sen. Bob Menendez, D-New Jersey, ranking member of the Senate Foreign Relations Committee, and Senate Democratic Leader Chuck Schumer, D-New York.

“This determination is another victory for those who value the truth and believe in the importance of the words “never again,'” they said. “We call on President (Donald) Trump to end his deference to (Turkish) President (Recep Tayyip) Erdogan and to join Congress in saying genocide is genocide.”

In a statement for Armenian Remembrance Day, observed April 24, Trump did not use the word “genocide” but said the U.S. joined “the global community in memorializing the lives lost during the Meds Yeghern, one of the worst mass atrocities of the 20th century.”

“On this day, we believe it is our obligation to remember those who suffered and perished and reaffirm our commitment to protecting vulnerable religious and ethnic minorities around the world,” Trump said.

“Meds Yeghern” is an Armenian term for “the great crime.” Turkey accepts the killings took place but denies their circumstances constitute genocide.

NEXT: HHS ensures hospital patients get spiritual care amid pandemic