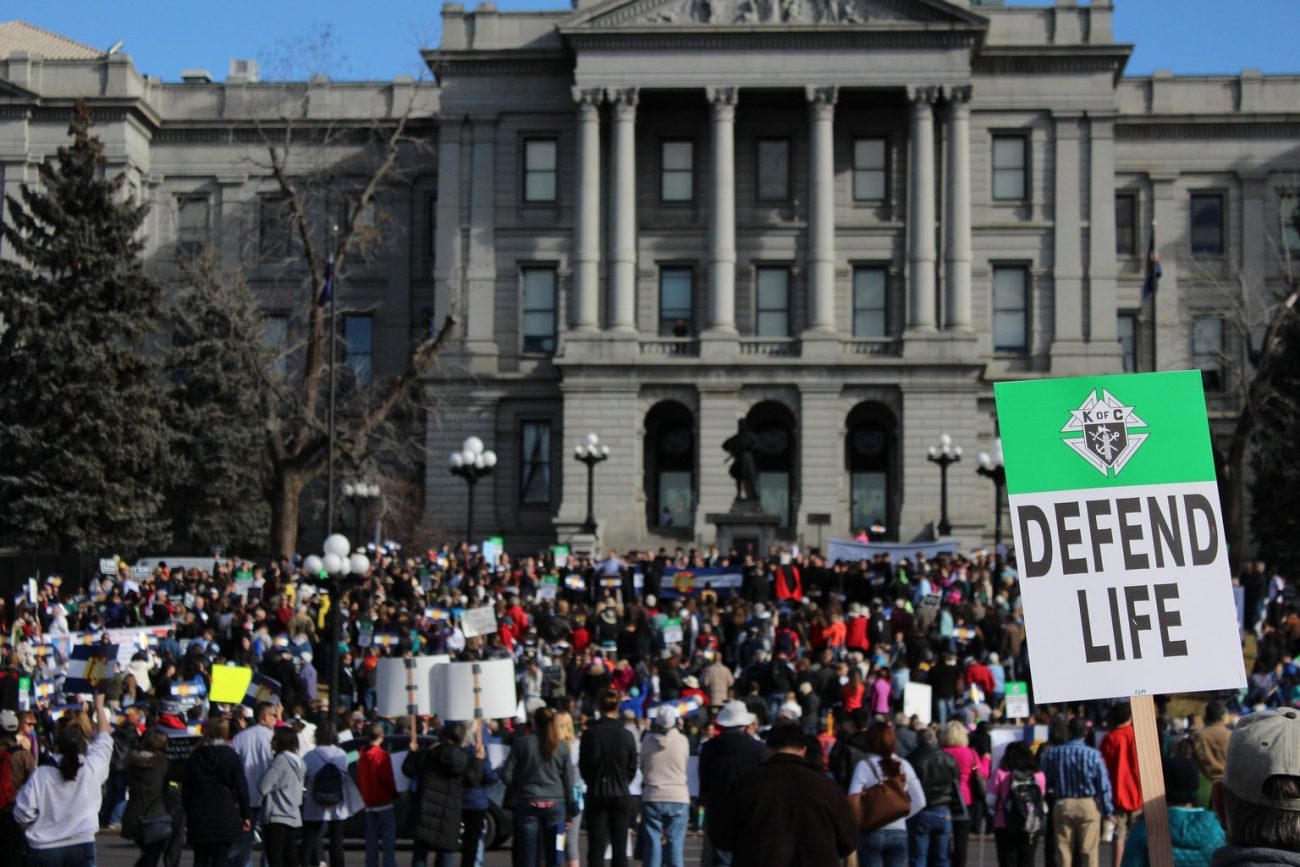 A participant holds a sign during the March for Life rally in front of the Colorado Capitol in Denver Jan. 17, 2015. (CNS photo/Eileen Walsh)

WASHINGTON (CNS) — Abortion is on the ballot in two states Nov. 3: Colorado and Louisiana.

In Colorado, Proposition 115 would ban abortion beginning at 22 weeks of pregnancy. The measure includes exceptions to save the life of the pregnant woman but not for instances of rape or incest.

Doctors who continue to perform abortions at 22 weeks could face a fine up to $5,000. Under the measure, the mother is not subject to any criminal penalties.

In Louisiana, Amendment 1 — the Love Life Amendment — asks voters: “Do you support an amendment declaring that, to protect human life, a right to abortion and the funding of abortion shall not be found in the Louisiana Constitution?”

The initiative does two things, said Louisiana Right to Life: It “places our long-standing Louisiana pro-life ethic in our Louisiana Constitution” and “ensures that state courts, whether now or when the U.S. Supreme Court overturns Roe v. Wade, cannot establish a ‘right to abortion’ or the tax-funding of abortion in Louisiana.”

In urging Coloradans to vote “yes” on Proposition 115, well-known author and speaker Mary Beth Bonacci said, “We can do better for women and for their children” than allowing abortion after 22 weeks.

“I want to make it clear that I join the church in opposing abortion at any stage, in any way it’s performed,” she said in a column in Denver Catholic, the news outlet of the Denver Archdiocese. “Every abortion stops a human heartbeat. So many women I know and love have had abortions. Some I know about, some I only surmise. In the cases I know about, they have suffered greatly in the aftermath.

“I just don’t think we solve women’s problems by taking their money, invading their bodies, killing their babies and sending them home.”

In describing the details of the “dilation and extraction” abortion procedure commonly used during the second-trimester of pregnancy, Bonacci said this “basically means that the cervix is dilated, and the baby, who weighs anywhere from one pound to full birth weight, is ‘extracted’ from the uterus and destroyed.”

“It’s horrifying. And it makes me physically ill to think that we can’t find a more humane way to solve women’s problems, whatever they may be,” she said.

Among the arguments against banning the procedure, she noted, is that “after 21 weeks only 1.2% of abortion procedures are initiated.”

“That comes to over 8,000 incidents per year in the U.S.,” she explained. “Saying this brutality ‘only’ happens 8,000 times per year is hardly a ringing endorsement.”

According to CQ Roll Call, opponents of Proposition 115 have spent $6.8 million to fight it and supporters of the initiative have spent about $333,000.

“We have been able to counter their money with grassroots phone calling, texting, literature dissemination and social media,” said Giuliana Day, co-sponsor of the proposition told CQ Roll Call. “Word of mouth is a powerful thing. The passion of our volunteers will be our secret to success on Nov. 3.”

According to a recent Gallup poll, 74% of Americans believe there should be limitations on late-term abortion. Colorado is one of only seven states that allow abortion for any reason up until birth with no restrictions.

In an informational posting on its website, Louisiana Right to Life is clear that the Love Life Amendment “will not stop abortion in Louisiana.”

“The question of whether abortion is legal or not, and in what cases, depends on federal and state law, not the Louisiana Constitution,” it said.

“The Love Life Amendment will simply ensure that Louisiana judges cannot establish a right to abortion or the tax-funding of abortion in the Louisiana Constitution,” it explained. “Even if Roe v. Wade were to be overturned, Amendment No. 1 would not stop state legislators from passing laws restricting or allowing abortion.”

The ballot initiative has bipartisan support in the state Legislature from Republican and Democratic pro-life lawmakers, it added.

Louisiana Right to Life argued the amendment is needed because 13 state Supreme Courts have “‘found’ a right to abortion and the tax-funding of abortion their state constitutions.”

“These decisions have resulted in pro-life laws being struck down by judges, reinforcing an abortion-on-demand policy. We can’t let this happen in Louisiana,” it said.

NEXT: ‘It is an attack on everyone’: Bishops react to Nice basilica murders