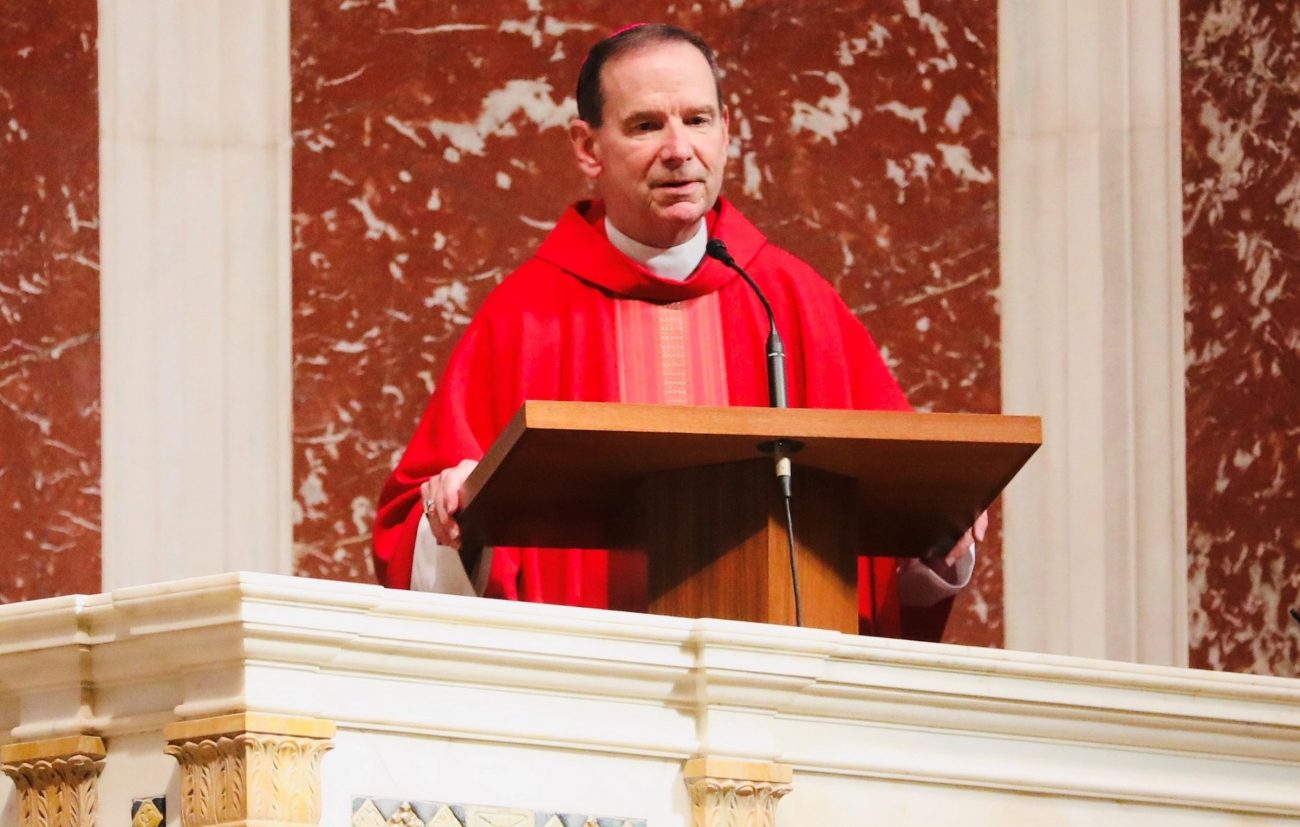 WASHINGTON (CNS) — Noting that in today’s society, “the justice and peace for which we long are seriously threatened,” Bishop Michael F. Burbidge of Arlington, Virginia, told those involved in the administration of justice that such societal ills could be healed “by listening to God’s word and allowing it to reign in our hearts.”

“Imagine the darkness and evils that would be eradicated, if we heard the word of God and followed it,” Bishop Burbidge said, adding: “There is a natural law written in every human heart by God the Creator, and from this, all human laws must flow.”

Bishop Burbidge was the homilist Oct. 4 at the 68th annual Red Mass offered at the Cathedral of St. Matthew the Apostle in Washington to invoke God’s blessing and guidance on justices, judges, diplomats, attorneys and senior government officials.

“When we open our hearts to God’s word, the Spirit sets us on fire,” the bishop said. “We become witnesses to Christ’s saving work in the world. Only with and through Him can we face the divisions, anger, and violence in our communities with sure hope for true and lasting peace.”

Washington Archbishop Wilton D. Gregory was the principal celebrant of the Mass. In addition to Bishop Burbidge, the concelebrants included Archbishop Christophe Pierre, the apostolic nuncio to the United States; Msgr. W. Ronald Jameson, rector of the cathedral; and Msgr. Peter Vaghi, pastor of the Church of the Little Flower in Bethesda, Maryland, and chaplain to the John Carroll Society, which sponsors the Mass.

Because of the safety measures in place due to the COVID-19 pandemic, attendance at the cathedral was limited and the Mass was livestreamed. In addition to those at the cathedral, more than 800 people followed the Mass via the internet.

The Red Mass, sponsored by the John Carroll Society, is traditionally held on the Sunday before the first Monday in October, the day on which the U.S. Supreme Court reconvenes after its summer recess.

The Mass is so named because of the red vestments worn by the celebrants; the color represents the tongues of fire often used to symbolize the Holy Spirit. 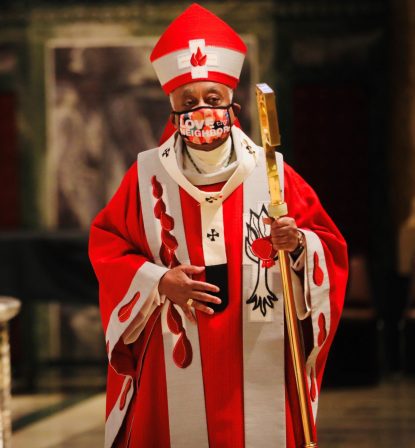 Bishop Burbidge encouraged those at the Mass to “strive daily to bring Christ into the public arena. Be authentic witnesses of his saving work.”

Reminding those in the legal profession that wisdom, understanding, counsel and strength are gifts of the Holy Spirit, Bishop Burbidge prayed “these gifts be yours as you confront the complex issues facing our nation, bear the public scrutiny brought upon you, and as you discern the many voices that clamor for your attention.”

He urged them to “defend every human life, from the moment of conception to natural death; to eradicate the evils of racism, discrimination and bigotry that plague our communities; to bring justice to the poor, the weak, the immigrant and the marginalized; to promote religious liberty and freedom of conscience; and to care for God’s creation, our common home.”

He also asked those at the Mass to “imagine the blessings that would be ours, if we practiced the wisdom of our Founding Fathers: ‘that all men are created equal, that they are endowed by their Creator with certain inalienable rights, that among these are life, liberty and the pursuit of happiness.'”

“Some forget this, sadly some reject it; some sadly grow weary in proclaiming it,” Bishop Burbidge said. “So, we say, ‘Lord, send out your Spirit and renew the face of the earth.'”

Justice Ruth Bader Ginsburg, who died Sept. 18 at age 87, served as an associate justice on the U.S. Supreme Court for 27 years, having been appointed by then-President Bill Clinton in 1993. President Donald Trump has nominated Judge Amy Coney Barrett, a Catholic, to replace Judge Ginsburg.

Bishop Burbidge asked those in the legal profession to follow the example of St. Thomas More, “a witness anchored in the truth. He was a civil servant, but without compromise, he was forevermore — and without compromise and no matter how great the threat — God’s servant first.”

St. Thomas More was a late 15th- and early 16th-century English lawyer and statesman who served as King Henry VIII’s lord chancellor. A devout Roman Catholic and fierce opponent of the Protestant Reformation, he was beheaded for refusing to acknowledge Henry’s divorce from Catherine of Aragon and the king’s self-proclamation as the supreme head of the Church of England. At his execution, his last words were “I die the king’s good servant, and God’s first.”

He was canonized in 1935 and proclaimed patron saint of politicians and statesmen in 2000.

“As you prepare to go forth into the world, ask God to give you the wisdom and courage … to be authentic witnesses to the truth. This is the sacred duty you all share,” Bishop Burbidge said. “Through the intercession of St. Thomas More, ask God to fill you with His Holy Spirit, to strengthen and guide you.”

During the Mass, prayers also were offered for those suffering from the coronavirus, including the president and first lady Melania Trump.

Bishop Burbidge said, “We pray with confidence today in Christ Jesus who is with us at this Mass (and) who told you and all of us: ‘The Holy Spirit that the Father will send in my name — he will teach you everything.'”

PREVIOUS: Bishops say ‘Rosary for America’ Oct. 7 imperative for a country in crisis