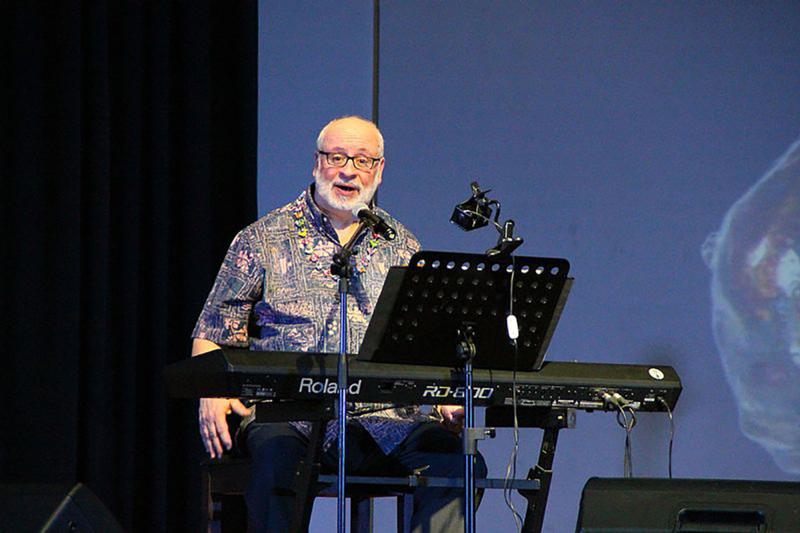 Catholic composer David Haas is shown in a concert at the Ateneo de Manila University in Quezon City, Philippines, in this 2016 photo. (CNS photo/Titopao, CC BY-SA 4.0)

ST. PAUL, Minn. (CNS) — A report detailing sexual abuse and assault allegations against Catholic musician and composer David Haas describes him using his influence as a faith leader in grooming victim/survivors and suppressing reports or concerns about his behavior.

The report also alleges Haas sexually abused minors, including the claim he raped a 13-year-old girl in 1979 during a confirmation retreat in the Archdiocese of St. Paul and Minneapolis.

The report alleges that, between 1979 and 1982, when Haas was in his early 20s, he targeted girls ages 13 to 17 for sexual acts, including rape. After 1982, reported allegations include grooming of girls under 18, and grooming, unwanted attention and touching, and forced sexual acts with women between the ages of 18 and 60.

Haas is a well-known composer of contemporary hymns, including “You Are Mine,” “We Are Called” and “Blessed Are They.” From 1999 to 2017, Haas led Music Ministry Alive!, a liturgical arts camp independent from, but held at, St. Catherine University in St. Paul. Haas has lead concerts and retreats and participated in conferences around the United States.

He also directs the Emmaus Center for Music, Prayer and Ministry in Eagan, Minnesota, and has worked in campus ministry in two high schools in the archdiocese.

In an Oct. 11 email to The Catholic Spirit, the archdiocesan newspaper, Haas, through an attorney, said he reiterated an apology he issued in July, and denied the claim he raped a 13-year-old girl.

“The new allegation in the Into Account report as referenced in the archdiocese statement that I sexually abused and raped a 13-year-old girl is absolutely false. It is an anonymous allegation and an attempt to smear me with an outrageously false allegation. I have never had improper sexual contact with a 13-year-old girl,” he said.

In June, Haas denied Into Account’s allegations, calling them “false, reckless and offensive.” In July, he issued an apology that said he had “come to realize that I have caused great harm to a variety of people.”

In the Oct. 11 email to The Catholic Spirit, Haas said he wants people whom he’s harmed to know he takes “full responsibility for my actions and am truly sorry.”

“I am continuing with professional intervention to help me face and understand how my actions have violated your trust,” he said, speaking to those whom he’s hurt.

In an Oct. 8 statement, Tim O’Malley, director of ministerial standards and safe environment in the archdiocese, called the report “disturbing.”

“We affirm and emphasize the importance of courageous survivors of abuse telling their story publicly,” he said. “History has shown that confronting sexual abuse leads to a better future and promotes justice. Hopefully, that proves to be the case here.”

O’Malley said that prior to Into Account’s report, his office was unaware of the 1979 rape allegation. The Into Account report claims the alleged victim and an adult reported the incident to church officials, including Archbishop John R. Roach, on three separate occasions. The late archbishop led the archdiocese from 1975 until his retirement in 1995; he died in 2003.

O’Malley said that professional investigators, all former law enforcement personnel, reviewed the archdiocese’s files and did not locate a report of the claim. The office has alerted law enforcement about the allegation, he said.

In the Oct. 8 statement, O’Malley encouraged anyone with information about criminal behavior to immediately report it to police. He also reiterated information he shared in two prior statements this year, following a May 2020 letter circulated by Into Account first publicizing the allegations.

In 2018, the archdiocese received reports that Haas had allegedly made noncriminal, sexual advances on two young adult women in another state. O’Malley said his office interviewed the women and allowed Haas to address the reports. The archdiocese then told Haas that he was not allowed to provide his services to Catholic institutions in the archdiocese without disclosing those complaints, and it declined to provide a letter of recommendation that Haas requested.

In a June 16, 2020, statement, O’Malley also acknowledged a complaint the archdiocese received in 1987 that “Haas made unwanted sexual advances toward a young adult woman,” which Haas denied.

The October report from Into Account, which is based in Kansas and led by Stephanie Krehbiel, described the incident as a “sexual assault of an 18-year-old first-year woman student at the College of St. Benedict” in St. Joseph, Minnesota, for which Haas was required to write a letter to the victim-survivor’s parents.

In July 2020, after receiving additional complaints that Haas had “engaged in inappropriate conduct” with other young women at various locations around the country in the 1980s, the archdiocese notified Haas that he was no longer allowed to provide his services at Catholic institutions in the archdiocese.

Seventeen other dioceses and other Christian groups have made similar decisions. Liturgical music publisher GIA Publications announced in June that it had ended its longtime relationship with Haas, a prolific composer.

Into Account’s report was based on reports of 44 women, including Haas’ former wife Jeanne Cotter, a fellow liturgical musician to whom he was married from 1988 to 1995. In a June 21 Facebook post, Cotter said they began a relationship when she was 16 and he was 23, and that they divorced because of Haas’ infidelities.

The report’s authors described Haas’ sexual behavior toward his victims as aggressive and sudden, with a focus on vulnerable women.

Women who raised alarms about signs of grooming — such as an abundance of personal communication, sexual conversations or excessive physical affection — were told by others that those behaviors could be dismissed as “That’s just David.” The report claims that women who resisted his advances received or feared Haas’ retaliation in their professional or social lives.

The report also includes allegations that Haas spiritually manipulated girls and women, in part through Music Ministry Alive!, a five-day camp for teenagers ages 14 and older.

According to the report, participants had “a cult-like reverence for Haas,” who created emotionally intense prayer and small-group sharing situations, where Haas gained information he could use to allegedly assess participants’ vulnerability. The report claimed that Haas groomed girls during the camp, and then would later assault them when they were young adults.

In an Aug. 4 statement to its community, St. Catherine University said that while his camps were held on its campus, Haas has never been a member of the university’s faculty or staff. It said the university was investigating its relationship with Haas and allegations involving Music Ministry Alive! and “will take action pursuant with university policies and legal guidelines” if it finds any abuses have taken place.

In an Oct. 9 statement, the university said it “believes the victims who have come forward to share their experience” and its investigation continues.

NEXT: New statue honors Mother Cabrini for devotion to immigrants, children, the poor