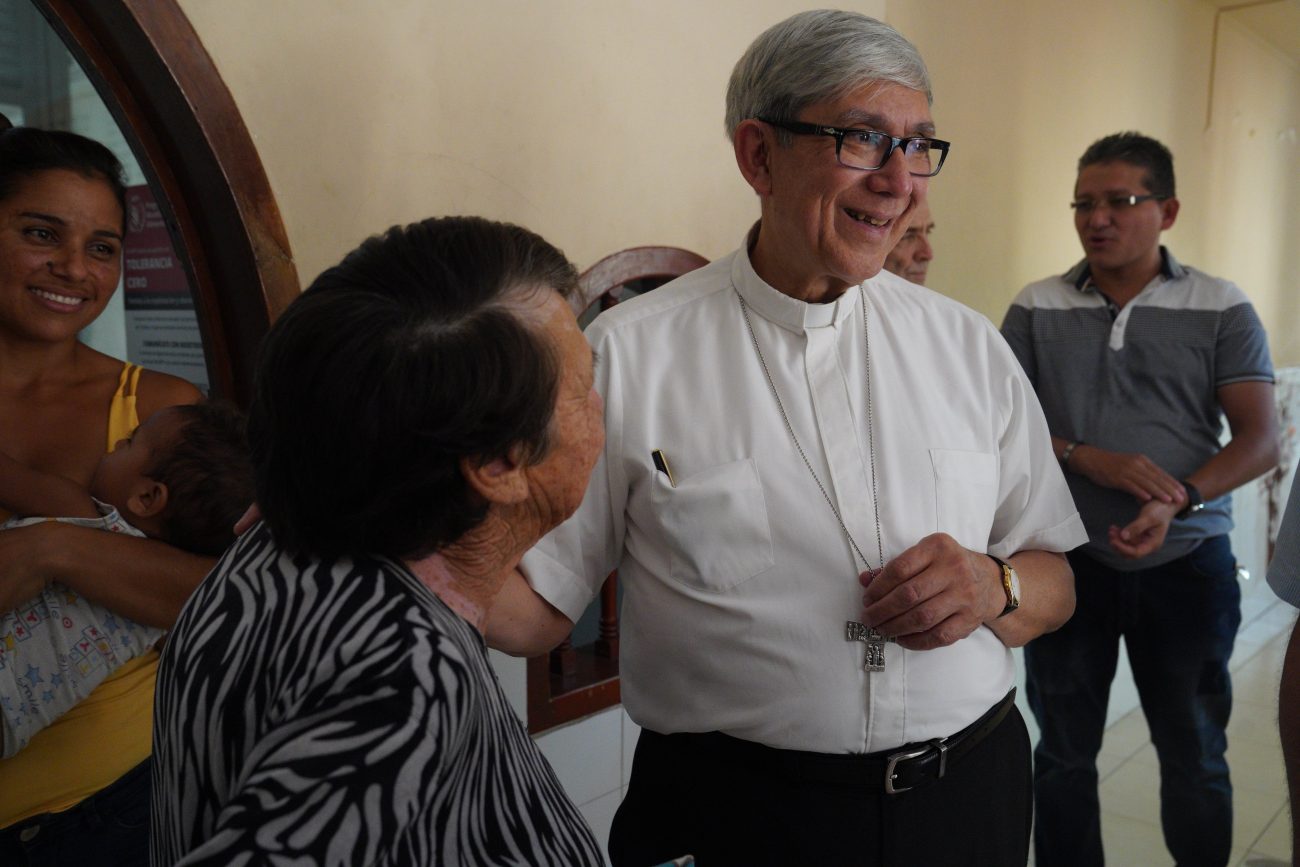 Auxiliary Bishop Octavio Cisneros of Brooklyn, N.Y., greets Venezuelan migrants staying at a shelter run by Scalabrinian missionaries in Cucuta, Colombia, Jan. 30, 2020. Pope Francis accepted his resignation Oct. 30. The Cuban-born prelate is 75, the age at which canon law requires bishops to submit their resignation to the pope. (CNS photo/Manuel Rueda)

The Cuban-born prelate is 75, the age at which canon law requires bishops to turn in their resignation to the pope. Ordained a priest of the Brooklyn Diocese, he was named an auxiliary bishop for the diocese in 2006 by Pope Benedict XVI.

His resignation was announced in Washington Oct. 30 by Archbishop Christophe Pierre, Vatican nuncio to the United States.

Bishop Cisneros is the vice postulator for the sainthood cause of Father Felix Varela, a 19th-century Cuban priest who served in New York for almost 30 years, ministering to Irish immigrants in the early part of the 19th century. Father Varela lived in exile for many years in the United States and died in Florida in 1853. The bishop is a founding member and president of the Felix Varela Foundation.

He also is pastor of the parishes of Holy Child Jesus and St. Benedict Joseph Labre in Richmond Hill in the New York borough of Queens. He will remain as pastor and also will continue to serve as the diocese’s vicar for Hispanic concerns.

Bishop Cisneros said he was grateful to Pope Benedict and Bishop DiMarzio “for giving me the fullness of the priesthood in 2006” so he could help minister as auxiliary bishop, “which has been rewarding and fulfilling for me. ”

“I am thankful to Pope Francis for his continued support of our bishops. He is an inspiration for all of us,” he said in a statement. “I have lived a very happy priesthood in the Diocese of Brooklyn for 49 years and look forward to continuing my priestly ministry.”

Bishop Cisneros was born July 19, 1945, in the province of Las Villas, Cuba, and came to the United States as part of Operation Pedro Pan, a Catholic-sponsored program that brought 14,000 unaccompanied minors from Cuba in the 1960s after the communist government of Fidel Castro came to power.

Relocated to Marquette, Michigan, he attended and graduated from St. Paul High School in Negaunee, Michigan. He went on to St. Lawrence Minor Seminary in Mount Calvary, Wisconsin, where he earned an associate arts degree, and Niagara University, where he received a bachelor’s degree.

His first year of theology studies took place at DeSales School of Theology in Washington, and he completed his theological studies at the Immaculate Conception Seminary in Huntington, New York, in the Diocese of Rockville Centre, earning a master’s degree in divinity.

He was ordained to the priesthood by Brooklyn Bishop Francis J. Mugavero on May 29, 1971.

For the first eight years of his priesthood, he served as parochial vicar at St. Michael’s Church in Sunset Park, New York. In 1979, he was named diocesan coordinator of the Hispanic Apostolate and eight years later was appointed pastor of Our Lady of Sorrows Church in Corona, New York.

He was named seminary rector in 1991 and secretary for priestly formation in 2004. He has been pastor at Holy Child Jesus and St Benedict Joseph Labre since 2007.

Throughout his priesthood, he was appointed as an episcopal, or territorial, vicar in the Brooklyn East Vicariate. He also served as rector of Cathedral Seminary Residence in Douglaston, New York. He was named a monsignor by St. John Paul II in 1988.

Bishop Cisneros also has been involved with the Northeast Catholic Center for Hispanics and the Instituto Nacional Hispano de Liturgia, and on the national level served on the U.S. Conference of Catholic Bishops’ liturgy committee. He has been a member of the board of governors of Immaculate Conception Seminary and is a past president of the Conference of Diocesan Directors for the Spanish Apostolate.

During his episcopal ordination as an auxiliary bishop Aug. 22, 2006, he said he was “honored and privileged” to have been accepted by the priests of the Brooklyn Diocese as “one of their own,” adding that he “would choose no other diocese to be a priest in.”

To the congregation, he said: “My prayer of thanksgiving is for you and all the work you do to build up the kingdom of God.”

He was ordained an auxiliary bishop with two others named auxiliary bishops for Brooklyn — now-retired Bishop Guy A. Sansaricq, who was born in Haiti, and Bishop Frank J. Caggiano, who now heads the Diocese of Bridgeport, Connecticut.

NEXT: Blessed McGivney: Model parish priest with ‘zeal’ for Gospel, for serving faithful