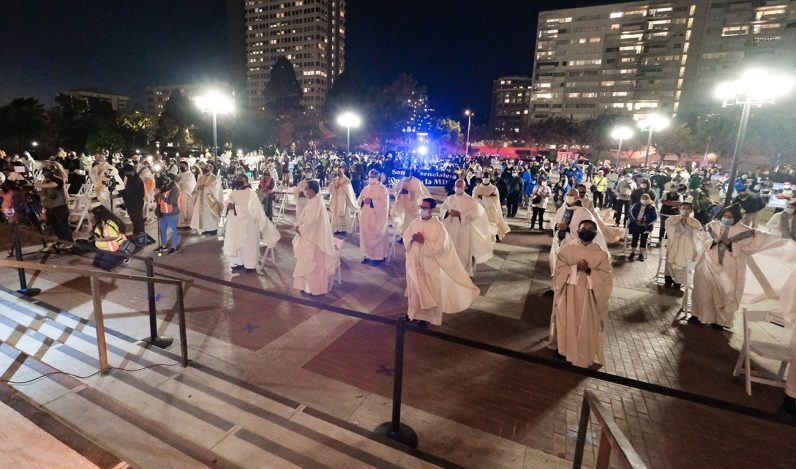 People in San Francisco participate in a rosary rally Oct. 3, 2020. The event drew about 700 people to the Cathedral of St. Mary of the Assumption for an outdoor Mass. (CNS photo/Dennis Callahan, Archdiocese of San Francisco)

The hour-and-a-half procession ended on the grounds of the Cathedral of St. Mary, where the archbishop celebrated an outdoor Mass.

This was the 10th annual rosary rally — after it was revived on the 50th anniversary of Holy Cross Father Patrick Peyton’s historic rally in Golden Gate Park.

Archbishop Cordileone also renewed the consecration of the archdiocese to the Immaculate Heart of Mary.

“Francis is famous for many things, but that for which he was most zealous is often overlooked: worthy and fitting worship of the one, true God, and reverence for the body and blood of Christ,” the archbishop said in his homily.

“Zeal for the Blessed Sacrament and the proper respect due to it marked his entire life, right up to the very end,” he said, adding that St. Francis strongly condemned treating Mass or the Eucharist casually.

“For him, everything having to do with the treatment of the Blessed Sacrament and the celebration of Mass had to be the best we could offer: worthy, clean, beautiful, precise,” he said.

When it announced the Oct. 3 rosary rally and Mass, the Archdiocese of San Francisco said the event would be “transformed from a public manifestation of faith to urge fair treatment into a united prayer of thanksgiving from the heart of San Francisco’s Catholics.”

Archbishop Cordileone has been at the forefront of the movement by religious leaders to press San Francisco Mayor London Breed to allow more worshippers to attend indoor services.

On Sept. 30, the city announced it would allow attendance for indoor worship to be 25% of the capacity of a house of worship, or up to 100 people, which follows the limit set by the state of California as part of its COVID-19 safety protocols. Before this, the city allowed one person at a time to be in any church to pray.

In a message issued late Sept. 29, after the city announced the change, Archbishop Cordileone called it “an important victory to savor and celebrate.”

However, he told the press, “this movement is not over. Our work and victories have just begun.”

He thanked people of faith in San Francisco and “the thousands of others across the nation who are joining us at FreeTheMass.com,” a site where people can sign a petition posted in English and Spanish. To date, it has garnered 36,210 signatures.

In a video message to Catholics on YouTube, he again thanked the faithful for signing the petition and standing up for faith and God, which are “essential,” he said.

Efforts will continue to lift allow more people to worship indoors and to make sure our “right to worship is respected in equality with secular activities,” he added.

Contributing this story was Nicholas Wolfram Smith on the staff of Catholic San Francisco, newspaper of the Archdiocese of San Francisco. 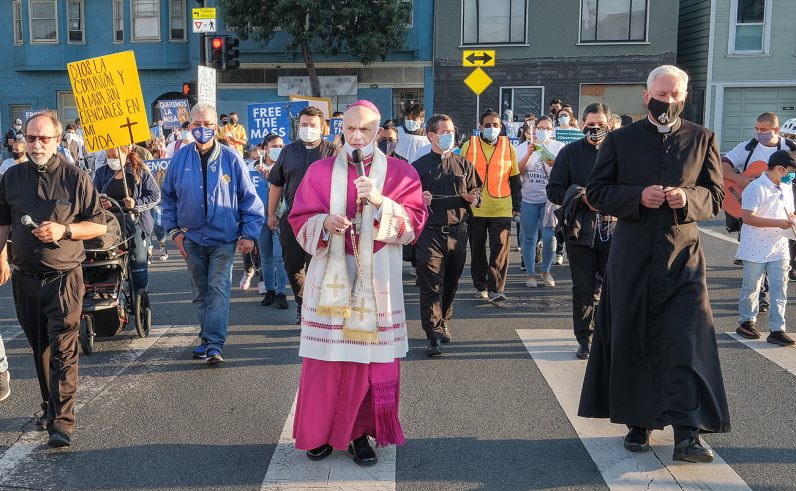 San Francisco Archbishop Salvatore J. Cordileone leads a rosary rally through the city’s streets Oct. 3, 2020. The event drew about 700 people outside the Cathedral of St. Mary of the Assumption. (CNS photo/Dennis Callahan, Archdiocese of San Francisco)