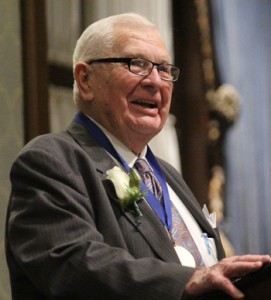 Robert John Sims, 94, longtime resident of Wayne, died peacefully Oct. 21 surrounded by his large loving family. He was the husband of the late Gloria MacCarter Sims, who passed away in 2005.

He was known for welcoming everyone with a big smile and an infectious response “fantastic” when asked how he was doing.

Mr. Sims was born in Philadelphia to a Lithuanian immigrant father and loving mother who instilled in him from an early age the importance of faith in his life, the blessing of family and the essential principle to work hard.

He was a graduate of Northeast High School and then went on to serve in the United States Navy during World War II. After the war, he graduated from Temple University and started his career in the insurance industry.

Mr. Sims lived a long and productive life providing for his family and steadfastly serving his church and civic community well into his 90s. Bob was a loyal and faithful Catholic his entire life. He served the church locally and internationally for decades.

In addition to being an active parishioner of St. Katharine of Siena in Wayne, he was a longtime member of the Philadelphia Chapter of Legatus, Men of Malvern, Catholic Leadership Institute, Catholic Philopatrian Institute, Pennsylvania Catholic Conference and the Stewards of St John Neumann.

He faithfully served the Archdiocese of Philadelphia for decades as chairman of the Finance and Audit Committees. He worked closely in guiding Cardinals John Krol, Anthony Bevilacqua and Justin Rigali in the important decisions in the life of the archdiocese.

For all of his commitment and generosity to the archdiocese, he was twice honored by St. John Paul II as a Knight of St. Gregory and later as a Knight Commander of St. Gregory, the highest honor given to a layman by the pope.

He was also a Knight of the Equestrian Order of the Holy Sepulcher where he served as an adviser to his lifelong friend, Cardinal John Foley, who served as Grand Master of the order in Rome.

Mr. Sims was well known and respected in the tri-state area as a trusted financial planner. He quickly became a top salesperson for Provident Mutual and then a corporate executive with Mutual of New York. He saw a bigger need for true financial planning so he established Fin-Plan investments in 1960 and was one of the early pioneers in the industry. 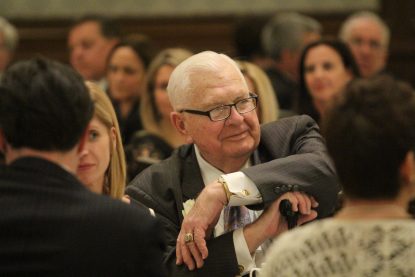 Robert Sims, at the 2014 Sourin Award dinner of the Catholic Philopatrian Literary Society in Philadelphia (Photo by Sarah Webb)

In between working, volunteering, and raising a large family with Gloria, Mr. Sims loved to travel with family and friends. He especially loved his travels to Rome that spanned more than 50 years. Bob had the high honor of greeting Pope St. John XXIII, Pope St. Paul VI, Pope St. John Paul II on many occasions, Pope Benedict XVI and Pope Francis.

To celebrate his 90th birthday, the family gathered in Rome for what would be his final trip abroad. During this week, he was able to greet Pope Francis personally twice in the same week. The Holy Father on both occasions wished him a blessed birthday and remarked that he did not look 90!

Bob enjoyed his membership and time with family and friends at Overbrook Golf Club, Ocean Reef Club in Key Largo, the Philadelphia Union League and the Philadelphia Country Club. He treasured his time in the beauty of the Skytop Club in the Poconos where family and friends would gather in his home and enjoy time together. He loved to gather people together and spend quality time with all of them.

Mr. Sims often said that the most important things in life are faith, family and friends. This can be measured through the time and effort he devoted to each and the happiness of his children and grandchildren in learning these values.

Lou Baldwin, a journalist for the former Catholic Standard and Times and now for CatholicPhilly.com, wrote a summary of Mr. Sims when the Catholic Philopatrian Literary Institute honored him in 2014 with the Sourin Award for his remarkable contributions to his family, the church and the community: “Bob Sims, a friend to all, great and common.”

The funeral Mass will be celebrated at St. Katharine of Siena Church in Wayne. The Mass and interment will be private. A celebration of Bob’s long and faithful life will be celebrated in the future where friends may gather in larger numbers.

He was predeceased by his parents, Stanley and Marie, his brother Stanley, sister Florence and his beloved granddaughter Lily Byrne.

Donations in Bob’s memory may be made to the Robert J. Sims Fund for Catholic Education, 71 Farrier Lane, Newtown Square, PA 19073. 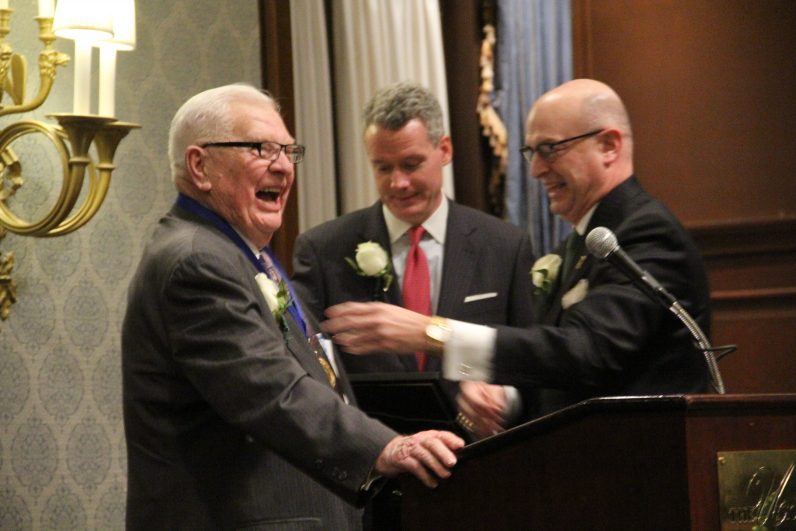 Robert Sims receives the Catholic Philopatrian Literary Institute’s Sourin Award in 2014 for his remarkable contributions to his family, the church and the community. (Sarah Webb)