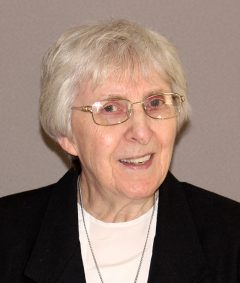 She was born in Portland, Oregon, and later moved to Pendleton. She entered the congregation in 1954 and professed her first vows in 1957. She ministered in education, social services, and as congregational historian.

Sister Emily Ann ministered for 29 years in the Archdiocese of Seattle. While teaching, she also served as the congregational historian for the Sisters of St. Francis for a number of years and during a four-year period, she alternated between Tacoma, Washington, and Aston, Pa., serving in that role and working on finalizing the congregational history.

She also volunteered at Olympus House in Tacoma and later at St. Ann Convent where she cared for the retired sisters. In 2004 she moved to Assisi House, the congregation’s retirement residence in Aston, where she served in prayer and hospitality until her death.

During her 19 years in the Archdiocese of Portland, Sister Emily Ann served as provincial secretary and worked in social services at the Northwest Pilot Project and Volunteers of America. She taught at Gervais Elementary School and Sacred Heart School. She also engaged in parish ministry at Sacred Heart Parish.

During her six years in the Diocese of Baker, Sister Emily Ann taught at Sacred Heart Academy in Klamath Falls and served as a caregiver for a family member in Pendleton.

Services were held in Assisi House on Oct. 20 and were private. Burial will be in Our Lady of Angels Cemetery. Sister Emily Ann is survived by her sister, Colleen Christiansen; her brother, Richard Herbes; her nieces and nephews; and her Franciscan family. Donations in her name can be made to Sisters of St. Francis Foundation, 609 S. Convent Rd., Aston, 19014.

NEXT: Robert Sims, faithful Catholic leader for decades, dies at 94