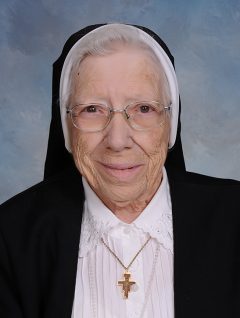 Sister Margaret St. John Brocato, O.S.F., 92, died Oct. 14 in Assisi House, Aston. She had been a professed member of the Sisters of St. Francis of Philadelphia for 71 years.

She was born in Baltimore and entered the congregation in 1947, professing her first vows in 1949. She later earned a BS in education from Mount St. Mary’s University in Emmitsburg and an MA in administration from the Catholic University of America. Sister Margaret ministered primarily in elementary education as both teacher and principal.

During her 32 years in the Archdiocese of Baltimore, she taught at St. Clement School in Rosedale, St. Elizabeth School in Baltimore, and the Frederick Academy of the Visitation in Frederick. She also served as principal of Immaculate Conception School in Towson. In later years she volunteered at St. Joseph Medical Center in Towson.

In 1995 Sister Margaret St. John moved to Aston, where she volunteered at Assisi House, the congregation’s retirement residence. In 2016 she became a resident of Assisi House and served in prayer and hospitality ministry until her death.

All services will be held in Assisi House on Thursday, Oct. 22 and will be private. Burial of cremated remains will be in Our Lady of Angels Cemetery in Aston.

Sister Margaret St. John is survived by her brothers John and Raymond; by her nieces, nephews, and cousins; and by her Franciscan family. Donations in her name can be made to the Sisters of St. Francis Foundation, 609 S. Convent Road, Aston, PA 19014.