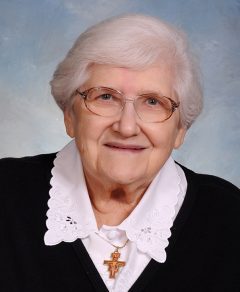 Sister Francis Anne Harper (formerly Dolores Genevieve Harper), O.S.F., died Oct. 1 in Assisi House, Aston. She had been a professed member of the Sisters of St. Francis of Philadelphia for 72 years.

She was born in Baltimore and entered the congregation in 1945, professing her first vows in 1948. She earned a B.S. in nursing from Villanova University and an M.A. in health care administration from George Washington University. Although she began her years in ministry in elementary education, she ministered primarily in health care.

Sister Francis Anne ministered for 25 years in the Archdiocese of Philadelphia. Initially she taught at St. Ludwig School in Philadelphia. During her years at St. Mary Hospital where she initially studied nursing, she served as supervisor in various departments.

In her later years in the archdiocese she served as coordinator of the Assisted Living Facility at St. Agnes Hospital Convent.

In 2004 she moved to Assisi House where she served in prayer and hospitality ministry until her death.
Sister Francis Anne also ministered for 21 years in the Diocese of Allentown. She was president and CEO of St. Joseph Hospital in Reading. During her last seven years in the diocese, she ministered at St. Joseph Living Center which she founded.

Sister Francis Anne spent 16 years in the Diocese of Harrisburg where she ministered at St. Joseph Hospital in Lancaster as supervisor in various departments, an instructor in nursing service administration, and eventually as assistant administrator.

During her nine years in the Archdiocese of Baltimore, Sister Francis Anne ministered for two different terms at St. Joseph Medical Center in Towson. She also served for a time as coordinator of St. Anthony Convent in Baltimore.

All services were held in Assisi House on Oct. 6, and were private. Burial was in Our Lady of Angels Cemetery in Aston.

Sister Francis Anne is survived by her niece, Dolores Whitehurst, and by her Franciscan family. Donations in her name can be made to the Sisters of St. Francis Foundation, 609 S. Convent Road, Aston, PA 19014.