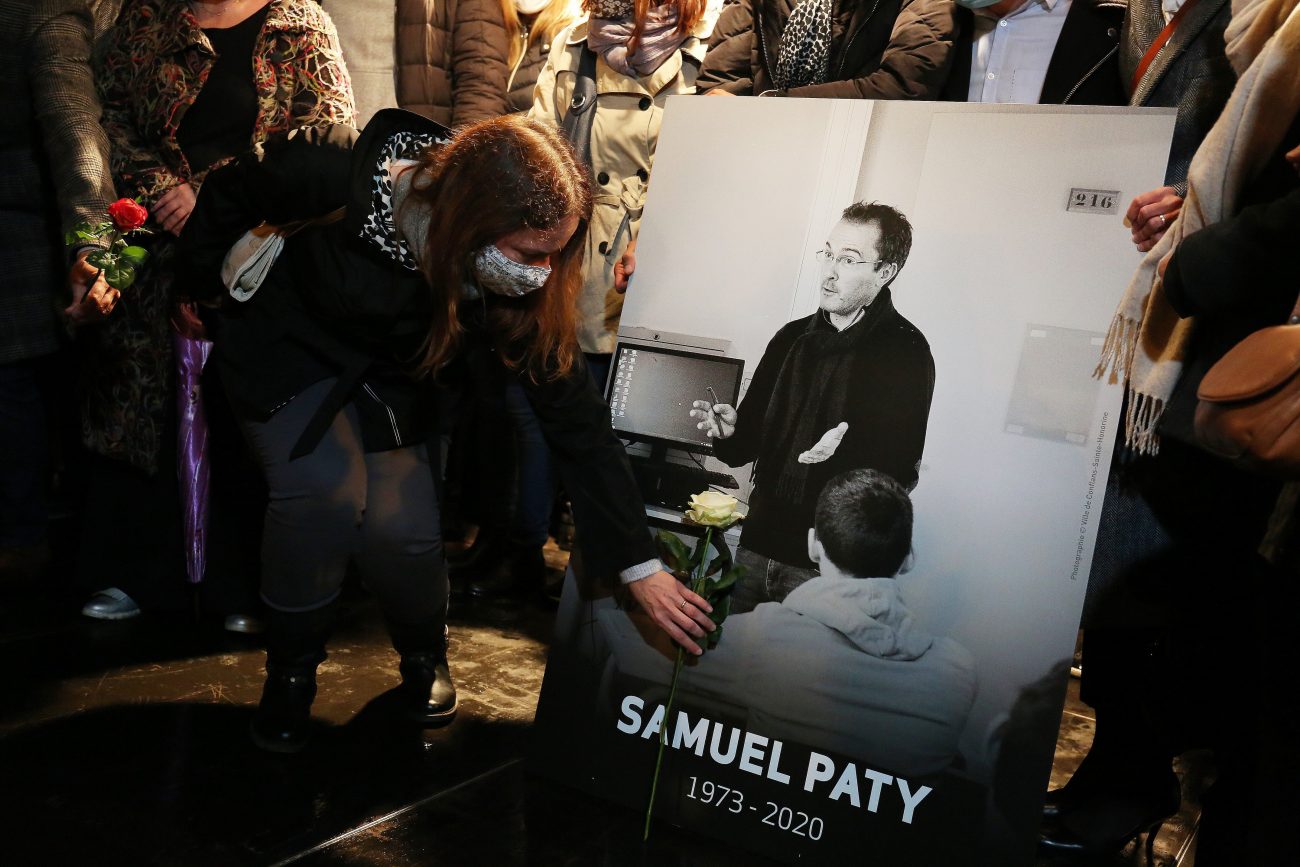 A woman places a rose on an image of Samuel Paty during a vigil in Conflans-Sainte-Honorine, France, Oct. 20, 2020. Paty, a history and geography teacher at College du Bois d'Aulne in the Paris suburb, was beheaded outside his school Oct. 16. (CNS photo/Jonathan Rebboah, Panoramic via Reuters)

PARIS (CNS) — France’s Catholic bishops have joined Muslim leaders in condemning the beheading of a teacher in a Paris suburb.

“We will defend schools and those who form them, so ignorance can be fought everywhere,” said Archbishop Laurent Ulrich, president of the bishops’ Council for Catholic Education.

“We will not back down in trusting in fraternity between people, formed through dialogue between social groups, religions and cultures, between knowledge, faith and reason. As Catholics, we assure the Muslims of our country that we will always be in dialogue with them.”

The Lille-based archbishop was reacting to the Oct. 16 beheading of Samuel Paty, a history and geography teacher, outside his school at Conflans-Sainte-Honorine.

In an Oct. 19 statement, Archbishop Ulrich said Catholics felt “deeply united” with educators everywhere after the outrage and would stand with others in an “educational pact” for “social friendship, dialogue and fraternity.”

Meanwhile, Archbishop Jean-Paul James of Bordeaux pledged solidarity with those “profoundly affected” by the attack, in a message with the southern city’s Muslim grand imam, Tareq Oubrou, and other religious leaders.

“The best bulwark against barbarism, fanaticism and terrorism remains fraternity, education and unity,” the joint declaration said. “The French Republic guarantees common rules that give everyone the dignity they have a right to. This is how our coexistence is built, on the defense of freedom of conscience and expression, on education in mutual respect.”

French prosecutors said Oct. 21 that they had raided at least 40 residences and arrested 16 people in connection with the street killing of Paty, who had shown cartoons of the prophet Muhammad in a class discussion on free speech. The 18-year-old attacker was shot and killed by police.

In a statement, the French bishops’ conference said the outrage indicated “fraternity is a matter of urgency.”

The Egypt-based grand imam of al-Alzhar Mosque, Sheikh Ahmad el-Tayeb, widely considered Sunni Islam’s highest authority, denounced the “deviant, false thought” behind the murder and dissociated it from “the rulings of the religion of Islam and teachings of the prophet.”

“At the same time, I reiterate that insulting religions and abusing sacred religious symbols under the slogan of the freedom of expression are forms of intellectual terrorism and a blatant call for hatred,” he said in a message to an Oct. 20 interfaith peace meeting in Rome.

PREVIOUS: Pope, religious leaders pray for peace, greater care for one another

NEXT: Main character of film on Pope Francis, director says, is humanity