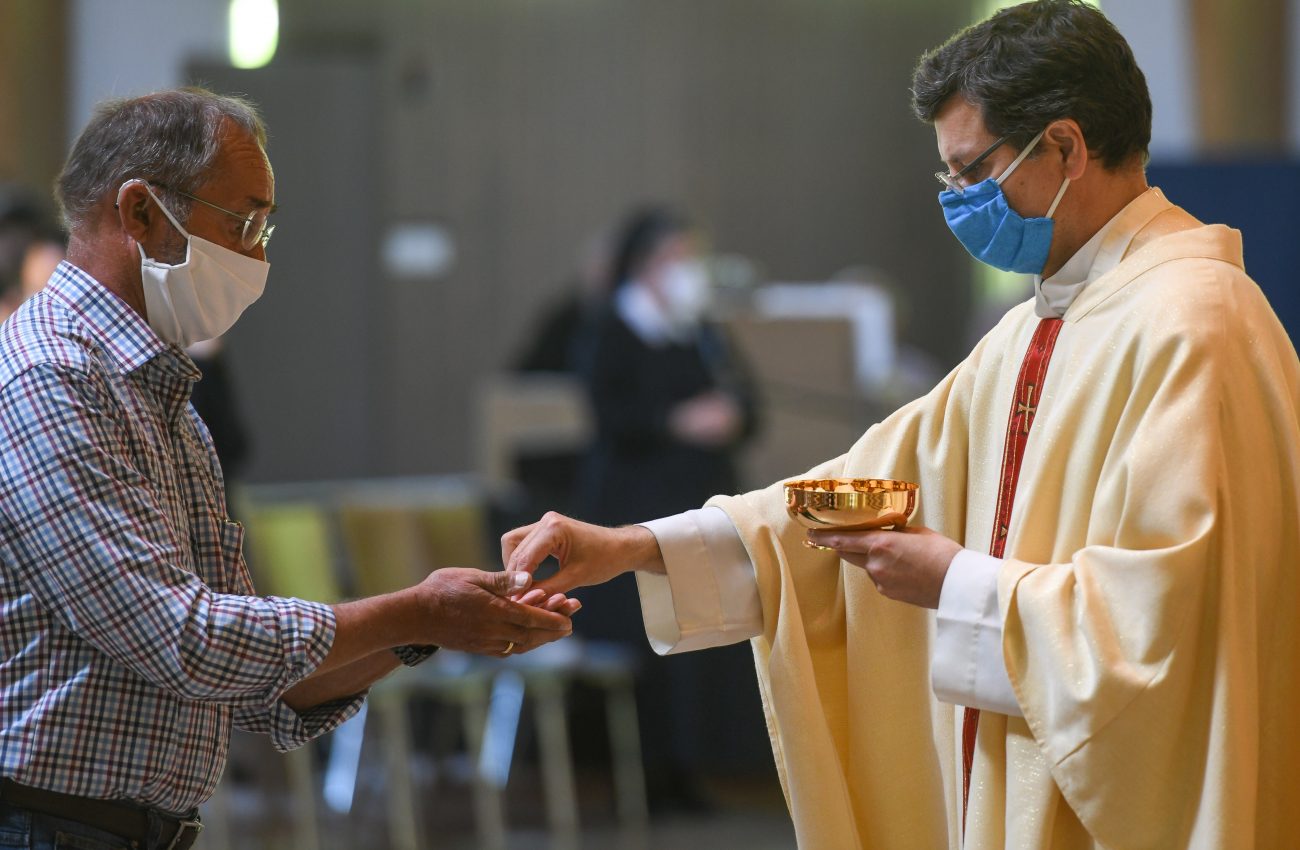 A priest distributes Communion in late May at a church in Vallendar, Germany. German Catholic and Protestant leaders say they will continue talks on shared Communion. (CNS photo/Harald Oppitz, KNA)

BONN, Germany (CNS) — The German Catholic bishops’ conference and the council of the Evangelical Church in Germany plan to continue their discussions about shared Communion, reported the German Catholic news agency, KNA.

German Catholic and Protestant theologians and bishops had published an appraisal of the topic in May, and it was scheduled to be discussed at the German bishops’ fall plenary assembly in Fulda at the end of September.

However, on Sept. 18, the Vatican Congregation for the Doctrine of the Faith voiced strong objections to the appraisal, saying that differences between Catholics and Protestants in the understanding of the Eucharist and the ministry were “still so grave” that they ruled out the attendance of at each other’s services, KNA reported.

On Oct. 6, leaders of both churches identified questions that “still need to be clarified” and addressed by Catholic and Protestant sides in different ways, KNA reported.

“For the Catholic Church, the open questions are so weighty that it does not feel able to allow mutual participation in general before they are clarified, especially since the question of the unity of the Catholic Church is affected here as well,” said the statement from the church leaders.

Germany has many mixed marriages — Catholic and Protestant — and the issue of being able to receive Communion at each other’s churches has long been an issue of concern. In 2018, one Catholic-Lutheran couple who had been married 24 years told Catholic News Service that many couples like themselves “have experienced rebuffs and coldheartedness from the churches, which has strained their marriage and led to estrangement from church.”

“It would be totally unimaginable to us to be separated from each other at the table of the Lord, when we share our whole life together in everything else,” said Herbert and Ines Heinecke.

When Pope Francis visited a Lutheran parish in Rome in November 2015, a Lutheran woman married to a Catholic asked Pope Francis why she could not receive Communion when she went to Mass with her husband.

The pope responded that he could not issue a general rule on shared Communion, but the couple should pray, study and then act according to their consciences.

In May 2018, Pope Francis asked the bishops of Germany to continue working together to find broader consensus on guidelines for allowing a Protestant married to a Catholic to receive the Eucharist. The Vatican said the German bishops were told, “Pope Francis appreciates the ecumenical commitment of the German bishops and asks them to find, in a spirit of ecclesial communion, a result as unanimously as possible.”

PREVIOUS: Pope calls for politics to renew focus on the common good

NEXT: Eventual coronavirus vaccine should belong to everyone, pope says