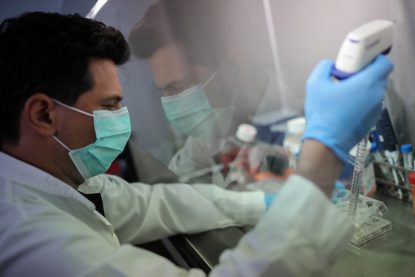 A scientist is pictured in early July at a university lab in Athens, Greece, working on cells that produce antibodies against COVID-19. In a message sent Oct. 7 to participants in the plenary assembly of the Pontifical Academy of Sciences, Pope Francis said the pandemic “brought to light not only our false securities, but also the inability of the world’s countries to work together.” (CNS photo/Alkis Konstantinidis, Reuters)

VATICAN CITY (CNS) — In facing the challenges of the COVID-19 pandemic, the efforts of the scientific community can serve as an example for the world on the importance of working together for the common good, Pope Francis said.

In a message sent Oct. 7 to participants in the plenary assembly of the Pontifical Academy of Sciences, the pope said that the pandemic “brought to light not only our false securities, but also the inability of the world’s countries to work together.”

The academy’s assembly, on the other hand, “brings together a number of different scientific disciplines” and “offers an example of how the challenges of the COVID-19 crisis should be addressed through coordinated efforts in the service of the entire human family,” he said.

The Oct. 7-9 virtual event, titled “Science and Survival,” focused on the coronavirus, as well as the “connections between large-scale risks for life on this planet and opportunities of science to address them,” the pontifical academy’s website stated.

Members of the academy also planned to address the “root causes and prevention of ‘zoonotic diseases,'” that is, “infectious diseases caused by bacteria, viruses or parasites that spread from animals to humans.”

“We also need to know more about the psychological foundations of human behavior in situations of collective stress, in order to decide on appropriate governance strategies in crises,” it said.

In his message, the pope said that COVID-19 not only affects people’s health, but also “the entire social, economic and spiritual fabric of society, paralyzing human relationships, work, manufacturing, trade and even many spiritual activities.”

It also has had a major impact on education, he added, in that great numbers of children are unable to return to school, thus risking an “increase in child labor, exploitation, abuse and malnutrition.”

On a broader scale, he said, “being unable to see a person’s face and considering other people as potential carriers of the virus is a terrible metaphor of a global social crisis that must be of concern to all who have the future of humanity at heart.”

The coronavirus pandemic, along with other issues such as global warming and the loss of biodiversity, he said, are calls for humanity “to rethink its course, to repent and to undertake an ecological conversion.”

The pope said the pandemic has also highlighted the plight of the poor who “cry out for equitable solutions on the part of government and all decision-makers.”

“Health care systems, for example, need to become much more inclusive and accessible to the disadvantaged and those living in low-income countries. If anyone should be given preference, let it be the neediest and most vulnerable among us,” Pope Francis said.

“How wonderful it would be if the growth of scientific and technological innovation could come along with more equality and social inclusion,” the pope said, quoting his recently published encyclical, “Fratelli Tutti, on Fraternity and Social Friendship.”

“How wonderful would it be, even as we discover faraway planets, to rediscover the needs of the brothers and sisters who orbit around us!” he said.

PREVIOUS: Eventual coronavirus vaccine should belong to everyone, pope says