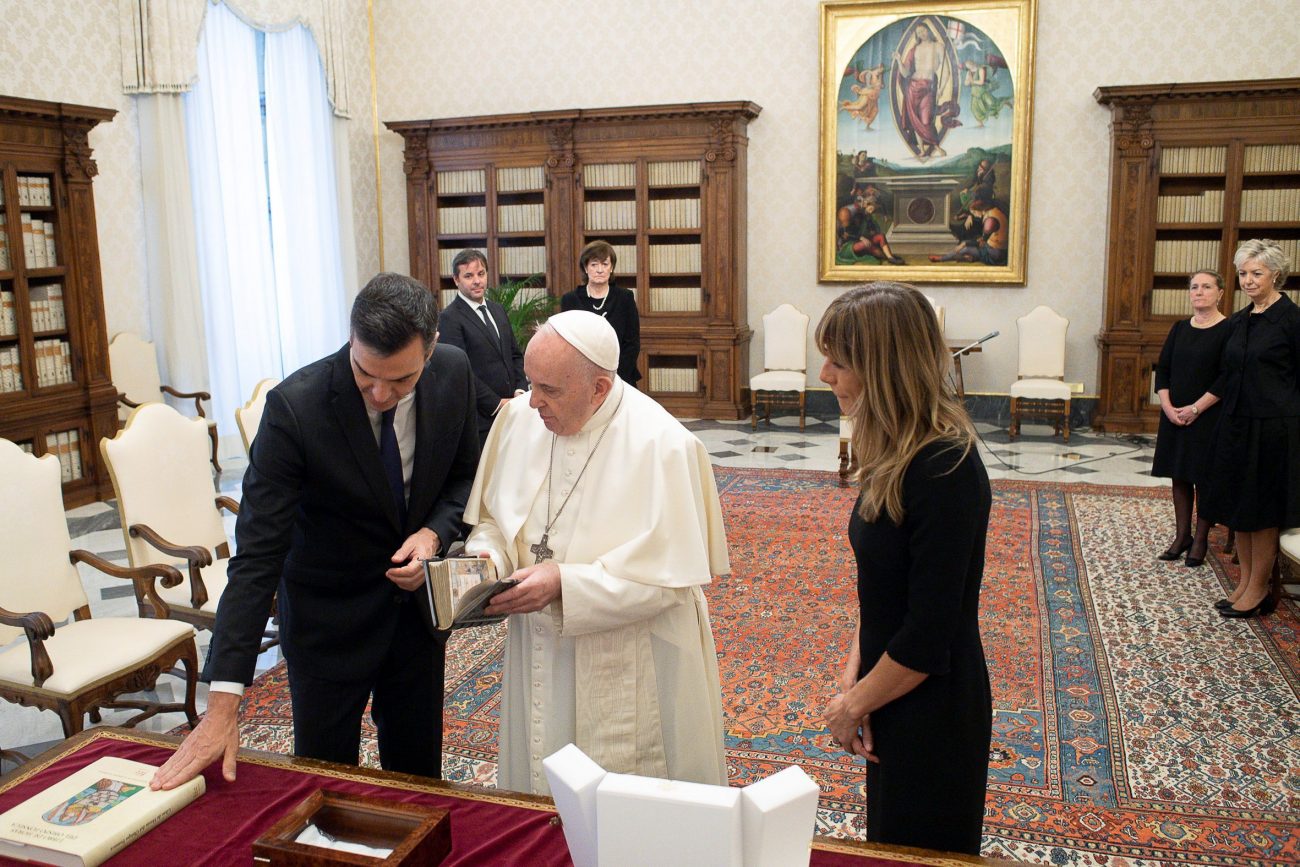 VATICAN CITY (CNS) — The rise of nationalism and the ideological divide that springs from it could create the same circumstances that led to the rise of the Nazi party in Germany and World War II, Pope Francis warned.

In a rare move, Pope Francis asked for a microphone and gave an off-the-cuff speech to Spanish Prime Minister Pedro Sanchez, who was accompanied by his wife, Maria Begona Gomez, and a delegation of officials Oct. 24.

Citing a book by Italian philosopher Siegmund Ginzberg titled “Syndrome 1933,” the pope said he agreed with its assessment that the ideological shift in today’s European political climate risks something similar to what occurred in Germany after the fall of the Weimar Republic, giving rise to the ideology of National Socialism, more commonly known as Nazism.

Ideologies “sectarianize, ideologies deconstruct the homeland, they don’t build it,” he said. And Ginzberg “very delicately, makes a comparison of what is happening in Europe. He says: ‘Be careful, we are repeating a similar path.'”

In his roughly eight-minute address to Sanchez and the Spanish delegation, the pope recalled St. Paul VI’s recognition of politics as “one of the highest forms of charity.”

“Politics is not only an art, but for Christians it is an act of charity, it ennobles and often leads to the sacrifice of one’s life, one’s privacy, so many things, for the good of others, and this is because the politician has in his hands a very difficult mission,” he said.

The pope’s comments came at a time of political division in Spain when lawmakers overwhelmingly rejected a vote of no-confidence Oct. 22 brought against Sanchez, a member of Spain’s Socialist party, by members of the far-right Vox party.

Vox accused Sanchez and his government of mishandling the country’s response to the coronavirus pandemic and of corruption.

However, even the Vox’s political ally, the center-right Popular Party, commonly known as PP, voted against the measure. It also drew a scathing rebuke by PP leader Pablo Casado, who said the vote was “wasting everybody’s time.”

In his address, the pope said politicians have the difficult duty of ensuring the growth and well-being of “the country, the nation and the homeland” for all citizens.

To build the homeland, however, requires the participation of all, not by “wiping the slate clean” of the past or seeking “refuge in what it was 50, 100 years ago,” he said.

“Perhaps the traditionalist fantasy is to return to the roots,” he said, but they ignore “the challenge of receiving from the roots to bear fruit” in the future.

Pope Francis said he hoped his words would serve as a reminder to politicians “that their mission is a very high form of charity and love.”

“It is not a matter of maneuvering or solving cases that come to the politicians’ desk every day, but of service on all three fronts: to make the country grow, to consolidate the nation and to build the country,” the pope said.

“It is very sad when ideologies take over the interpretation of a nation, of a country and disfigure the homeland,” he said.