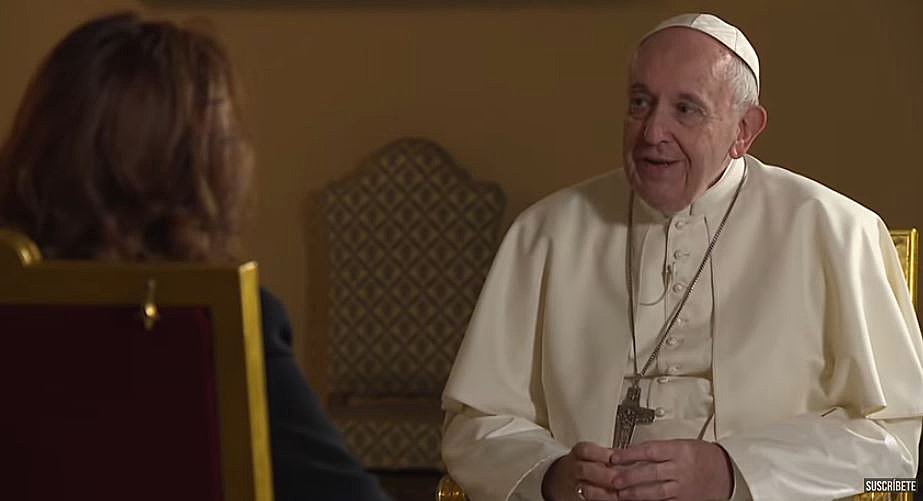 Pope Francis speaks with Valentina Alazraki of the Mexican television station Televisa during an interview that aired in May 2019. A clip, apparently cut from the interview and shows Pope Francis talking about "civil unions," is used in the documentary "Francesco" by Evgeny Afineevsky. (CNS screenshot/Noticieros Televisa via YouTube)

VATICAN CITY (CNS) — While there is no doubt that Pope Francis said civil laws should protect the rights of gay couples, some mystery shrouds the context in which he said it and the way it is used in a new film.

The film, “Francesco,” which was released Oct. 21, presents the pope saying: “Homosexual people have a right to be in a family. They are children of God and have a right to a family. Nobody should be thrown out or be made miserable over it. What we have to create is a civil union law. That way they are legally covered.”

When the documentary by Evgeny Afineevsky debuted at the Rome Film Festival and some news outlets focused on the 20-second clip referring to civil unions, a Vatican official dismissed it as old news, pointing out that the comments were from a 2019 interview with Valentina Alazraki of the Mexican television Televisa.

But the reference to civil unions does not appear in the one-hour, 17-minute interview broadcast by Televisa and available on YouTube, nor does it appear in the Vatican’s Spanish or Italian transcripts of the pope’s conversation with Alazraki.

And, in fact, the whole 20-second clip in “Francesco” appears to be a reedit, placing phrases the pope did say in the interview together in an order not found in the original.

In statements to the Associated Press, The Washington Post and The New York Times, Televisa confirmed that the pope’s comment about civil unions was part of the interview he gave to Alazraki, which was filmed by the Vatican television center. When Televisa was given the footage, the station said, the civil unions passage had been removed.

Televisa spokesman Ruben Acosta Montoya told The Washington Post in an email, “Someone at the Vatican gave us the part that we did broadcast, and later they gave the rest of the material to someone else,” specifically, Afineevsky.

The Vatican press office did not respond to requests for clarification.

Pope Francis has made similar references in the past to the need to provide legal protections for the rights of nonmarried people living together in a stable way — rights, for example, involving inheritance, health care decisions and visitation when one is ill.

And reporters are not the only ones he has discussed it with; Archbishop Salvatore J. Cordileone of San Francisco issued a statement Oct. 21 saying the pope talked about such protections with the bishops of California when they made their “ad limina” visits in January.

In an article on the conversation Jan. 27, Catholic News Service wrote, “The pastoral care of LGBT Catholics was another topic Pope Francis spoke about, Archbishop Cordileone said. ‘He spoke about the pastoral care that we have to give’ and the need to understand the suffering many of them have endured, including being shunned by their families.”

“‘He made important distinctions between the (sexual) orientation and the question of marriage,’ for example saying it was important to ensure gay couples have access to public benefits, but insisting gay couples cannot marry, the archbishop said. ‘Marriage is unique; marriage, by its nature, is complementarity between man and woman. And he spoke about the danger of the gender ideology and how it denies difference,’ the diversity with which God created human beings male and female.”

Pope Francis also is on the record supporting some form of civil union legal protections during his tenure as archbishop of Buenos Aires, Argentina, and in interviews published in 2014 and 2017.

In every case, he has insisted that a civil union law that equated gay relationships and marriage would be unacceptable since marriage is only between a man and a woman.

Archbishop Victor Fernandez of La Plata, Argentina, who is known to be close to Pope Francis, wrote on his Facebook page Oct. 21 that when, as archbishop of Buenos Aires, Pope Francis advocated for some form of civil union law, the majority of bishops disagreed fearing that many people would equate such a law with marriage.

Pope Francis never equated the two, he said. “For him, the expression ‘marriage’ has a precise meaning and applies only to a stable union between a man and a woman open to transmitting life.”

And, in fact, in the Televisa interview as broadcast, when Pope Francis said that LGBT people “have a right to a family,” he immediately added, “this does not mean approving homosexual acts — not at all.”

PREVIOUS: COVID lockdowns on earth can open up prayers in purgatory