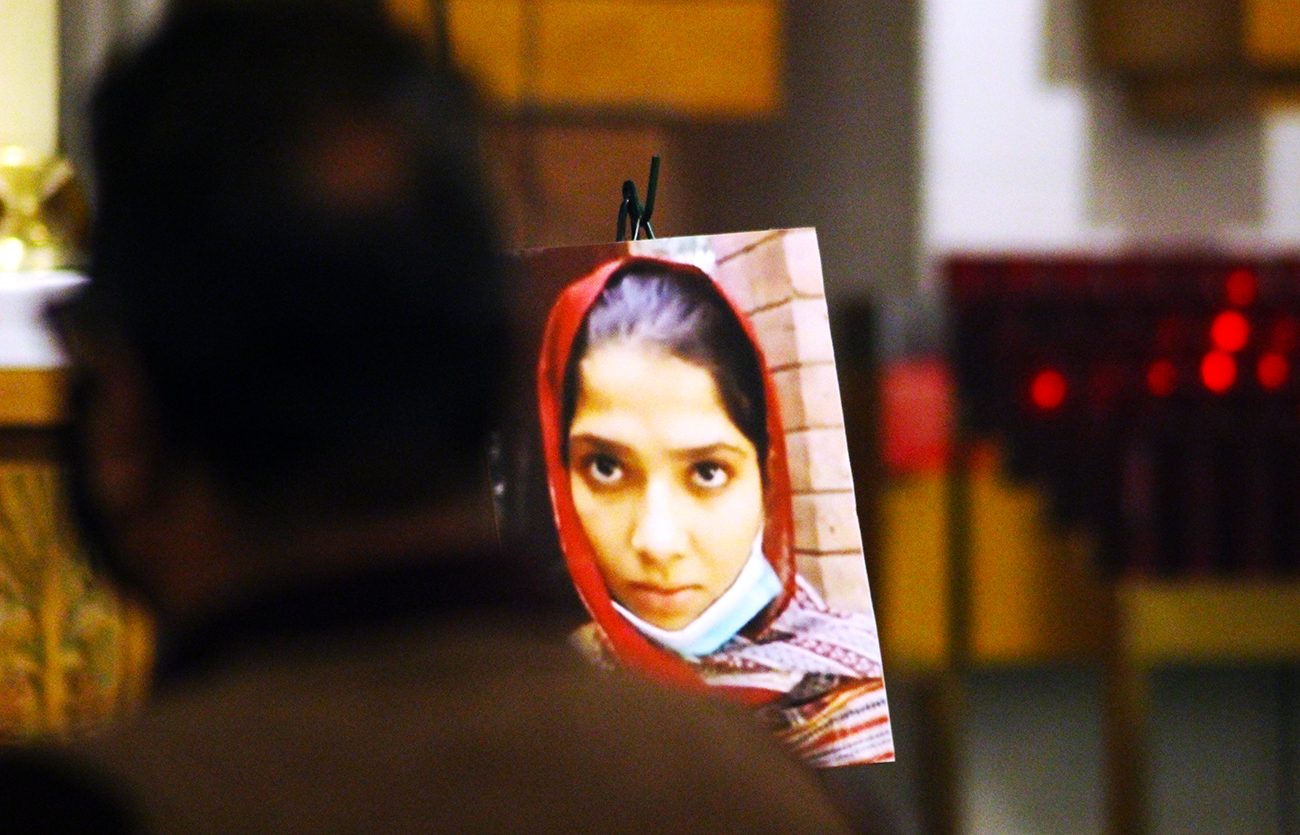 An image of a Pakistani Christian teen who was abducted and forcibly converted to Islam is displayed at a Nov. 8 Mass and prayer service hosted by St. William Parish in Philadelphia. Pakistani Catholics and Christians gathered to pray for global support in ending what has become a growing trend of human rights abuse against religious minorities in the South Asian nation. (Gina Christian)

Local faithful continue to pray for teen girls subjected to forced conversion and child marriage in Pakistan, part of a growing trend among endangered religious minorities in the South Asian nation.

Father Isaac was joined by fellow Pakistani priest Father Dominic Ishaq, part-time parochial vicar of Our Lady of Peace in Milmont Park and a member of the archdiocesan Metropolitan Tribunal.

Also on hand were a number of clerics from several Pakistani Christian congregations in Philadelphia, including Rev. Emmanuel Masih  and Rev. Safdr Masih of Pakistani New Life Church (Assembly of God); Rev. Khurshid Sharif of the Presbyterian Church of Pakistan; Rev. Ijaz Nethanial of the Presbyterian Church of Philadelphia; Rev. Shamaun Bashir of Sutun-E-Haqq Church; and Rev. Sir Nawaz.

Pictures of several Pakistani girls kidnapped in recent months were on display throughout the Mass and prayer service. Among them was an image of 13-year-old Arzoo Raja, abducted from her Karachi-area home by 44-year-old Muslim neighbor Ali Azhar, who is believed to have falsified documents to show the girl was 18 in order to wed her.

In an Oct. 27 decision, the High Court of Singh denied a challenge brought by Raja’s parents against the marriage’s validity under the nation’s Sindh Child Marriage Restraint Act. The ruling sparked nationwide protests led by Catholic bishops and human rights activists, and on Nov. 2 the court ordered Raja be placed in a shelter. Despite Azhar’s arrest, Raja’s family is still fighting to regain custody of their daughter, according to a Vatican News report.

“We strongly condemn the kidnapping, forced conversion and marriage of minor girls of minorities in Pakistan,” said Father Isaac. “We Pakistani Americans demand that the government of Pakistan take serious action to stop all such violations against minorities and against humanity itself.”

At the gathering, Father Isaac read a Nov. 5 letter by Philadelphia Archbishop Nelson Pérez, who extended “prayerful support for the Pakistani community in the midst of Christian persecution in (their) native land.”

Archbishop Pérez noted that he had learned “with deep sadness” of the abductions, forced conversions and child marriages to which according to one nonprofit some 1,000 teen girls from Christian minorities are subjected to each year in Pakistan.

“Such detestable practices are foreign to the mind and will of God. He is not deaf to (victims’) cries and their anguish,” wrote the archbishop.

He stressed that “this injustice … must be brought to an end” through the cooperation of “civil authorities in Pakistan along with the commitment of world leaders.”

On Nov.13, the Archdiocese of Karachi hosted a seminar to foster awareness of the issue and to implement practical strategies for eliminating abduction, such as improving educational opportunities for girls and strengthening family bonds.

Locally, Father Isaac – whose own family fled Christian persecution in Pakistan – plans to redouble his efforts to safeguard religious minorities in his native country by seeking urgently needed support from U.S. officials.

NEXT: Catholic high schools in Philadelphia to go all-virtual Nov. 23