Archbishop Pérez ‘endeers’ himself to St. Hubert Bambies during visit 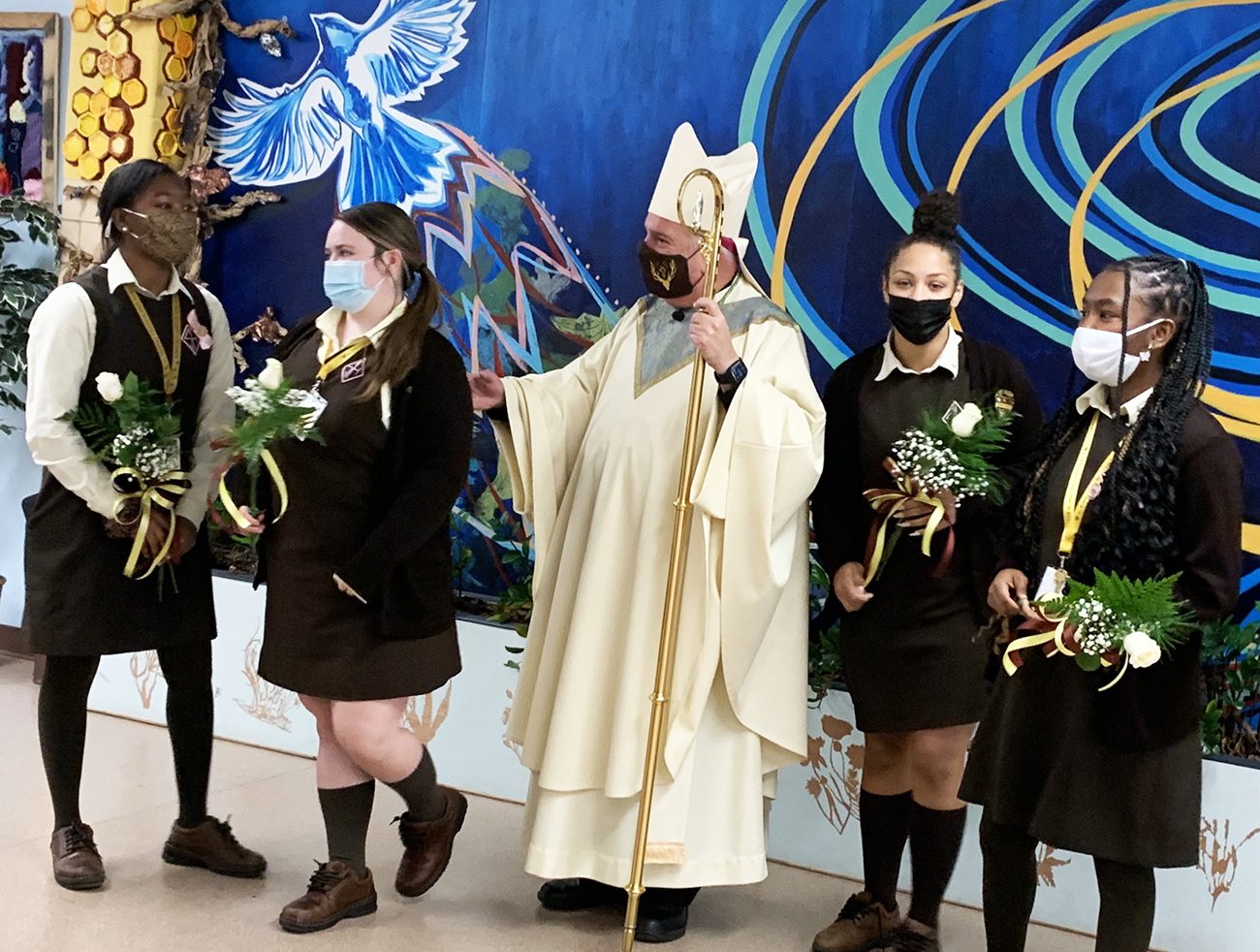 Archbishop Nelson Pérez greets several students at St. Hubert Catholic High School for Girls after a Mass he celebrated at the school during a Nov. 2 pastoral visit. The students pictured are part of the school's Rite of Christian Initiation for Teens (RCIT) program and will be confirmed within the coming weeks. (Gina Christian)

Archbishop Nelson Pérez “endeered” himself to the Bambies of St. Hubert Catholic High School for Girls during a Nov. 2 visit that included Mass and a tour of the Northeast Philadelphia institution.

The liturgy celebrated the commemoration of All Souls, while anticipating the Nov. 3 feast of the school’s patron.

Originally a medieval nobleman, St. Hubert was said to have encountered Christ while attempting to hunt a stag, and after his dramatic conversion, he eventually became the first bishop of Liège (now in modern Belgium). Following its opening in 1941, the school referenced the saint’s hunting episode by adopting the animated fawn “Bambi” (from the Disney film of the same name) as its mascot in 1942.

Due to COVID restrictions, only half of the Bambi “herd” was on site for the pastoral visit, with the remaining students viewing the Mass via livestream. Archbishop Pérez — who was joined by St. Hubert’s board chair and Vincentian Father Carl Pieber, as well as the archbishop’s master of ceremonies Msgr. John Savinski — warmly greeted both in-person attendees and viewers, saying, “I am thrilled to be with you Bambies.”

(See a photo gallery of the visit here.)

In his homily, the archbishop acknowledged that the pandemic, racial injustice and a contentious election had made for a difficult year.

Even the occasion of All Souls, when the Catholic Church prays in a special way for the deceased, could be “a sad day as we remember the people we love,” he said.

Yet “hope does not disappoint,” said Archbishop Pérez, repeating the words of the Mass’s second reading, taken from St. Paul’s Letter to the Romans (Rom 14:7-9, 10c-12).

Despite the past year’s nonstop cycle of crisis, “somehow, some way, God works through” tragedies and setbacks, said the archbishop.

Unlike wishful optimism, the hope professed by Christians has its “source … (in) Jesus Christ,” he said.

“The fact that we are all gathered together here … to hear his word, to celebrate his presence in the Eucharist, is unique and singular about Catholic school,” said Archbishop Pérez. “You’re so blessed to be here.”

In the latter part of his homily, the archbishop asked students to name “what was special about (their) school.”

Responses included the sense of sisterhood among students at the all-girls school; teachers, staff and administrators; opportunities for guidance; the school’s emphasis on faith – and, as one Bambi noted, “the fries.”

“I was going to ask you about the food in the cafeteria,” quipped Archbishop Pérez.

After the Mass, five students in the school’s Rite of Christian Initiation for Teens (RCIT) program each received a rose and a blessing from the archbishop.

St. Hubert president Lizanne Pando noted the girls “had been working very hard” in their pursuit of the faith, but had been delayed from receiving the sacrament of confirmation in the spring due to the pandemic. They expect to be confirmed soon.

The archbishop was also presented with a St. Hubert fleece jacket and a hand-made, personalized face mask designed by students in the school’s clothing and textile program – one of the few available at the high school level in the Philadelphia area.

After the liturgy, Archbishop Pérez joined a small group of students and administrators for a tour, which included stops at the school’s art, music, textile design and robotics studios.

Pando detailed plans to expand these programs still further, echoing the Scripture words she had also quoted in her post-Communion remarks at the Mass: “Hope does not disappoint.”

NEXT: Black Catholics come together as one at St. Martin de Porres Mass