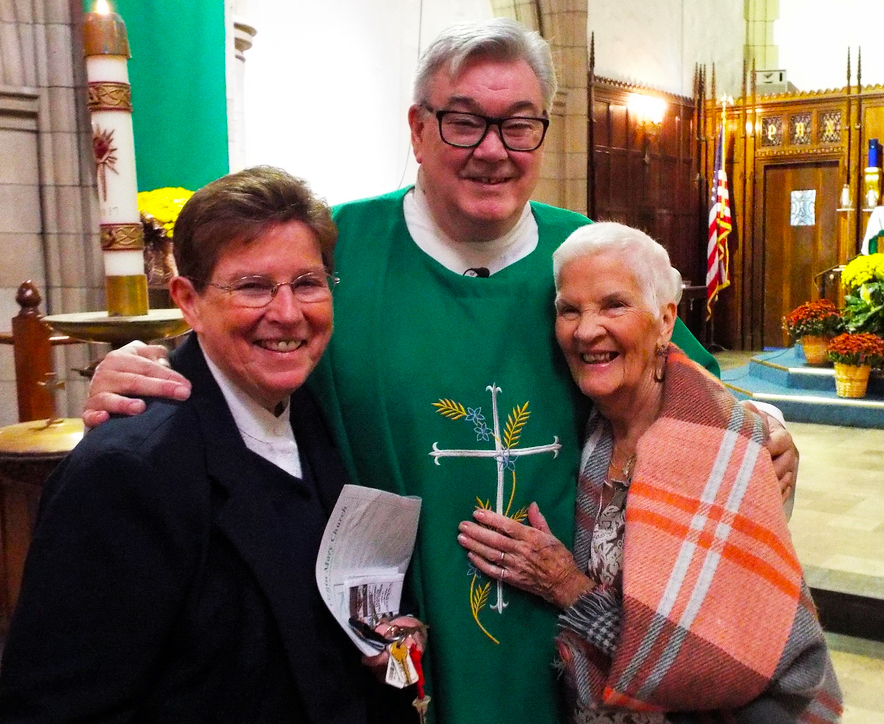 Msgr. Joseph Corley, seen here in this undated photo, was posthumously honored during an Oct. 25 Mass at Blessed Virgin Mary in Darby, where he served as pastor from 1998 until his death in June 2019. (Photo courtesy of Blessed Virgin Mary Parish, Darby)

A year and a half after his death, a beloved former pastor at one Delaware County parish has been honored with a building dedication from a flock still mourning his loss.

Msgr. Joseph Corley was remembered during an Oct. 25 Mass celebrated at Blessed Virgin Mary Parish in Darby, where he served as pastor from 1998 until his death in June 2019.

Some two hundred area faithful gathered for the liturgy, after which celebrant and parochial administrator Father Mariano Dellagiovanna blessed a plaque renaming the parish hall after Msgr. Corley.

“He was a man according to God’s heart,” said Father Dellagiovanna. “And I think that all those who knew him can agree with me.”

Father Dellagiovanna said he “very much looked up” to Msgr. Corley, as did dozens of other priests, including Msgr. Ralph Chieffo, pastor of St. Mary Magdalen in Media, who was also on hand at the Oct. 25 Mass.

Several of Msgr. Corley’s family members filled the front pews of the church, with a number of them offering humorous and poignant recollections of him during their post-Communion remarks.

(Left to right) Kolleen Bowers, Rita Eburuoh and Francisca Nwegbo attended an Oct. 25 Mass in honor of Msgr. Joseph Corley, who died in June 2019 after some 21 years as pastor of Blessed Virgin Mary in Darby. (CatholicPhilly.com composite photo/Gina Christian)

In his homily, Father Dellagiovanna noted that Msgr. Corley was a sought-after figure at the archdiocesan clergy’s annual convocations.

Many at the dedication liturgy recalled Msgr. Corley’s unique ability to lead while remaining “one of us,” said attendee Kolleen Bowers, a graduate of B.V.M.’s parish school.

“You looked up to him; he was a leader,” she said. “I talked to a few of his friends at his funeral, and they said he was always like that.”

Throughout his priesthood, Msgr. Corley held a number of leadership positions in addition to his pastoral assignment at B.V.M.

Ordained in 1975, the Philadelphia native served as assistant director of the archdiocesan Office for Youth and Young Adults and on the faculty of Cardinal O’Hara High School and John W. Hallahan Catholic Girls’ High School.

In 2014, he was named dean of the Eastern Delaware County Deanery. Three years later, he was appointed rector of Villa St. Joseph, the archdiocesan retirement home for priests, and named a Chaplain of His Holiness, with the title of monsignor, by Pope Francis. 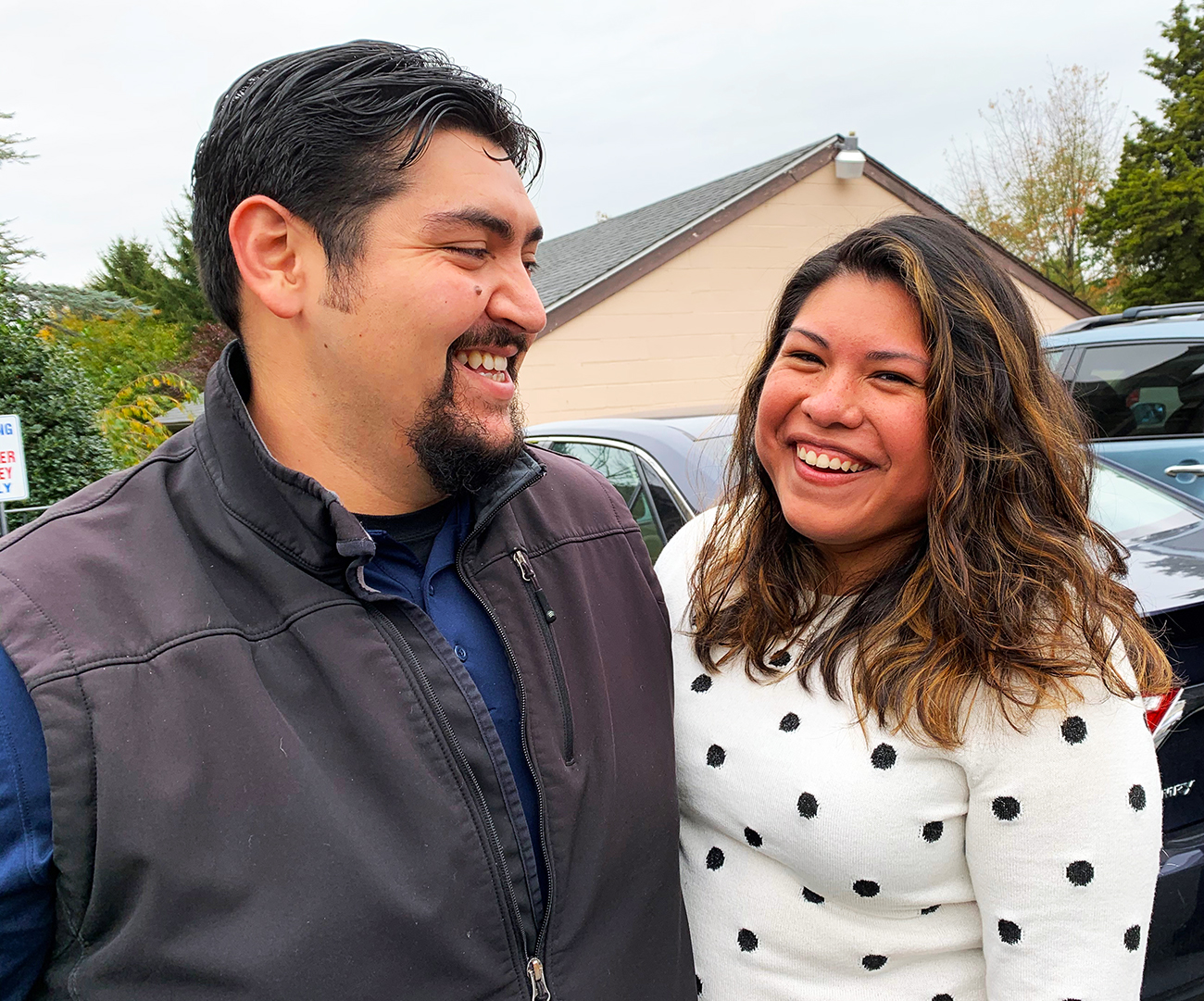 Clint and Estefania Velasquez, parishioners of Blessed Virgin Mary in Darby, are now praying to former pastor Msgr. Joseph Corley (who died in June 2019) for his intercession in building their family. (Gina Christian)

But his many titles and responsibilities never separated him from his flock, said Bowers, a Montgomery County resident who regularly drove over an hour to attend Masses at which Msgr. Corley presided.

“He made you feel claimed, like God does,” she said.

The ability to welcome parishioners, regardless of their backgrounds, enabled Msgr. Corley to “break down racial barriers” at the parish, which “is like the church of the United Nations,” said Bowers, adding “he would have it no other way.”

Parishioner Rita Eburuoh said that Msgr. Corley “made (her) feel at home” through his warmth and gracious acceptance.

“It wasn’t about what you look like … (or) being white or Black, rich or poor,” said Eburuoh. “He knew you, and you knew him. You could tell him anything and trust that he believed you and would guide you.”

Father Dellagiovanna said Msgr. Corley “gave his life for his people … because he fell in love with Jesus, and that brought him to love the brothers and sisters of Jesus, the children of God.”

Although his parishioners – many of whom brushed away tears during the Mass – still grieve his passing, Msgr. Corley “can now help the parish more from heaven than when he was here,” said Father Dellagiovanna.

“We believe in the intercession of the saints, the communion of saints, and we believe in the power of prayer,” he said. “Ask Father Joe: ‘You know my needs. … Give a good word for me to the boss.’”

Clint and Estefania Velasquez, who have struggled with infertility, plan to do just that.

“I went to him for confession one time, and I was really bummed out,” said Clint. “He gave me a word of encouragement, and he prophesied, ‘You will have twins one day.’”

Although they are still waiting to conceive, the couple remain hopeful their former pastor’s words will soon be fulfilled.

“As Catholics, we believe in the communion of saints,” said Clint, who continues to seek “the intercession of Msgr. Corley.”

“Maybe we won’t all be canonized, but there are walking saints among us,” he said. “And I’m going to hold him to this thing of the twins.”

NEXT: Archbishop Pérez ‘endeers’ himself to St. Hubert Bambies during visit