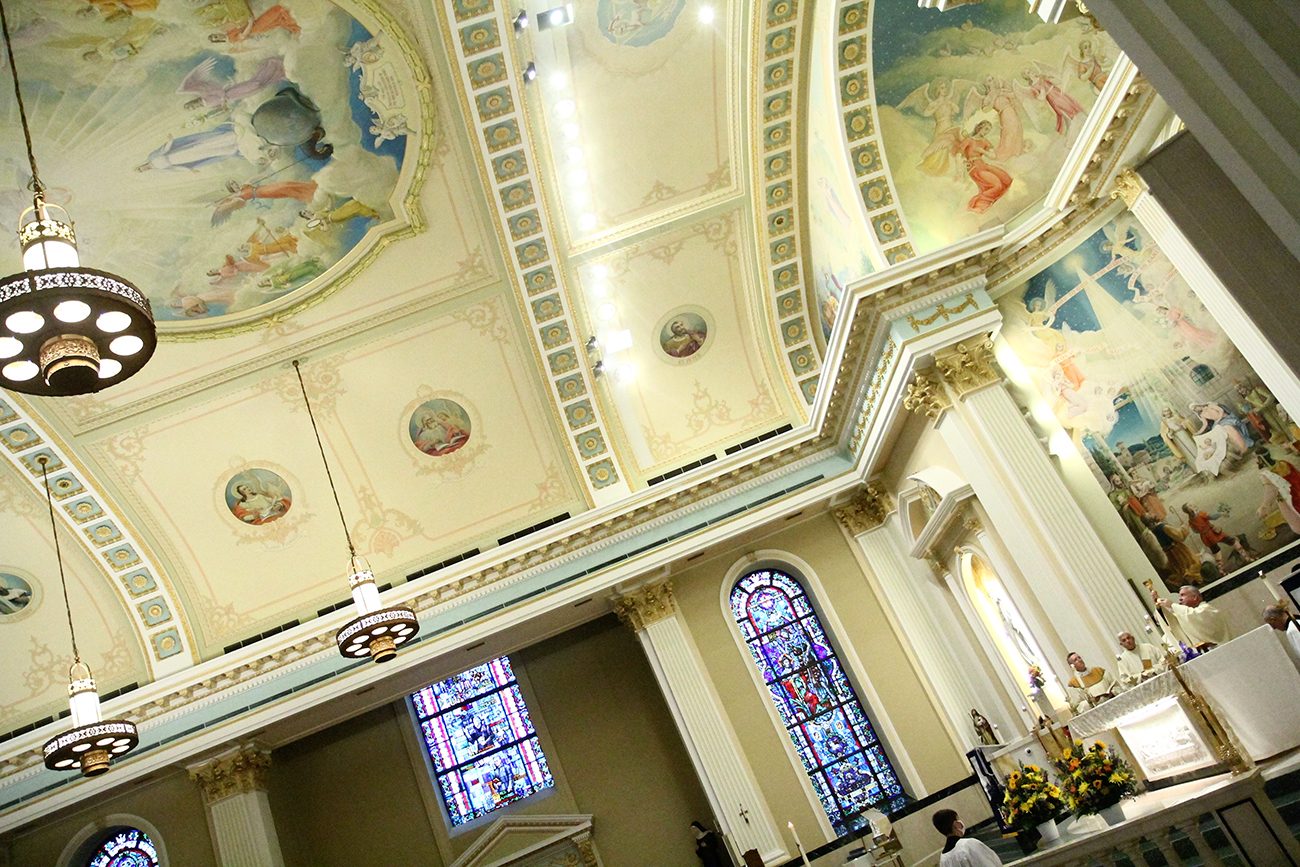 Archbishop Nelson Pérez consecrates the Eucharist during a Mass he celebrated along with clergy of St. Monica Parish in South Philadelphia to mark the 125th anniversary of the parish. (Photo by Sarah Webb)

It has been a turbulent year for everyone, but the faithful at St. Monica Parish in South Philadelphia have remained able to call on their church as a constant source of comfort and compassion for 125 years.

(See a photo gallery of the Mass and visit here.)

“Happy birthday,” the archbishop wished the congregation, noting how the date of the gathering should remind Christians always to call on the intercession of saints.

The archbishop returned to that advice throughout his interactions with the assembled parishioners, most of whom waited eagerly after the final blessing to chat with their spiritual leader and take pictures with him.

In connecting saints’ sacrifices with contemporary duties, Archbishop Pérez explained that everyone is called to lead a life of holiness and that one’s church yearns to be a huge part of that foundation.

“The church was founded to walk with you along your journey,” he said in a homily that included recollections of his early days as a Catholic school student, through which he learned about saints’ roles in that journey. “Believers have come and gone and will continue to do so, but (the) church, particularly your site that we are celebrating today, stands strong.”

Before a congregation that included parish school children who would later present him with a spiritual bouquet, the archbishop said that a missionary spirit must be at the heart of a parish’s existence.

He commended Father Joseph J. Kelley, St. Monica’s pastor and a seminary classmate of Archbishop Pérez with whom he formed many memories, for instilling that spirit in his flock.

“I have the honor of saying Mass today, and that presents me with another chance to point out that the most precious gift in any church is the altar,” Archbishop Pérez said. “In challenging moments and in happy ones, it’s there to be our guide. Let’s never lose sight of the need to draw people to it.”

Home today to nearly 3,000 families, St. Monica traces its history to New Year’s Day, 1895, when it was established by decree of Archbishop Patrick Ryan, who had observed the significant growth of population in South Philadelphia in the 19th century.

According to a St. Monica Parish history, the first chapel for the new parish came by way of an assist from St. Veronica Parish in North Philadelphia. That church was purchased, dismantled, transported across the city, reassembled and ready for worship by May 1895. Six years later ground was broken on a new church at 17th and Ritner streets, and dedicated in 1903.

Five years after that, St. Monica School began serving some 600 Catholic children in the parish, led then as now, even though fewer in number, by the Sisters, Servants of the Immaculate Heart of Mary. The sisters actually had been offering Sunday school classes right from the parish’s beginning in 1895.

In the subsequent years strong growth became evident in the form of a new rectory and convent that were later expanded, and numerous parish societies for social and spiritual growth and to serve the needs of the parish.

Even as the parish’s boundaries were reduced to accommodate the erection of St. Edmond and St. Richard parishes nearby, St. Monica’s population, buildings and services continued to increase.

One feature of the young parish was its commitment to youth, including an innovation that would remain significant even today: an early childhood program. In 1916 the St. Monica Day Nursery enrolled children from six months old to age 6. For 23 years it was led by Sister M. Laurentina, I.H.M., until her death in 1942. A kindergarten program would follow in 1945. 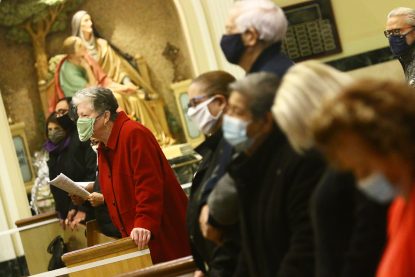 Parishioners pray during Mass at St. Monica Church in South Philadelphia Sunday, Nov. 1. In the background is a statue in the church of St. Monica and her son, St. Augustine. (Sarah Webb)

Outreach to the less fortunate residents in the neighborhood also has been a feature of St. Monica’s via the St. Vincent de Paul Society and the diligence of the parish’s clergy, religious sisters and laypeople.

Following World War II the parish experienced remarkable prosperity under the guidance of Father Aloysius F.X. Farrell, the pastor. New parish organizations would blossom and a larger school was dedicated in 1962, followed by another school three years later.

And one other pastor would himself be a name of pride in the community, Auxiliary Bishop Louis A. DeSimone, who led St. Monica’s for many years as the beloved “Bishop of South Philadelphia.”

Although a fire in 1971 destroyed all but the exterior walls of the church, it was rebuilt into the beautiful, welcoming structure it had been and remains today.

At the 125th anniversary Mass last Sunday, Permanent Deacon Leonard DeMasi referred to the parish’s distinguished history by lauding parishioners’ missionary zeal and the service of the Immaculate Heart Sisters for their transformational roles within the parish.

He also invited Archbishop Pérez to visit St. Monica’s again. As an enticement, he gave the archbishop a taste of the South Philadelphia parish’s generosity by presenting him with a basket of Italian delights and cookies.

“I enjoyed having this experience,” said Brunella Benales after Mass at a social gathering in the parish’s junior school. “This place is a cornerstone in South Philly, so it’s wonderful that the archbishop was here to help us mark our anniversary.”

Having graduated from the parish school and logged 22 years as an adult parishioner, Benales contributes to St. Monica’s as an extraordinary minister of holy Communion and a member of the Home and School Association. Based on that service, her children’s educational growth through St. Monica’s School and other bonds she has established, she offered a point that many others would likely share. 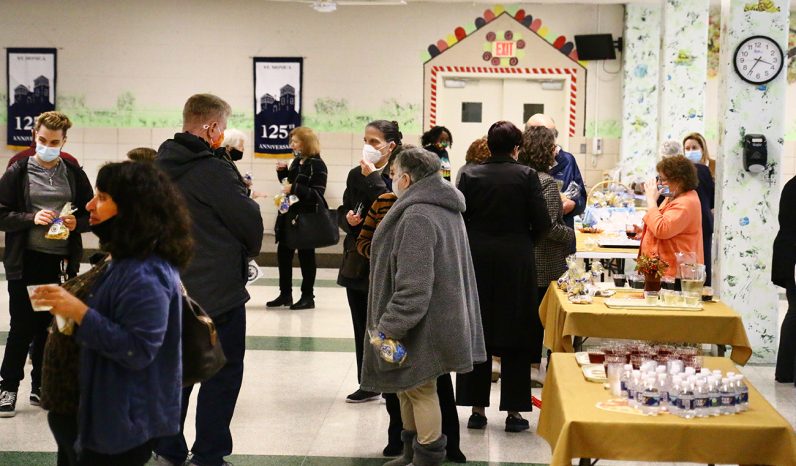 PREVIOUS: Hundreds of faithful join in prayer for Election Day