Hundreds of faithful join in prayer for Election Day 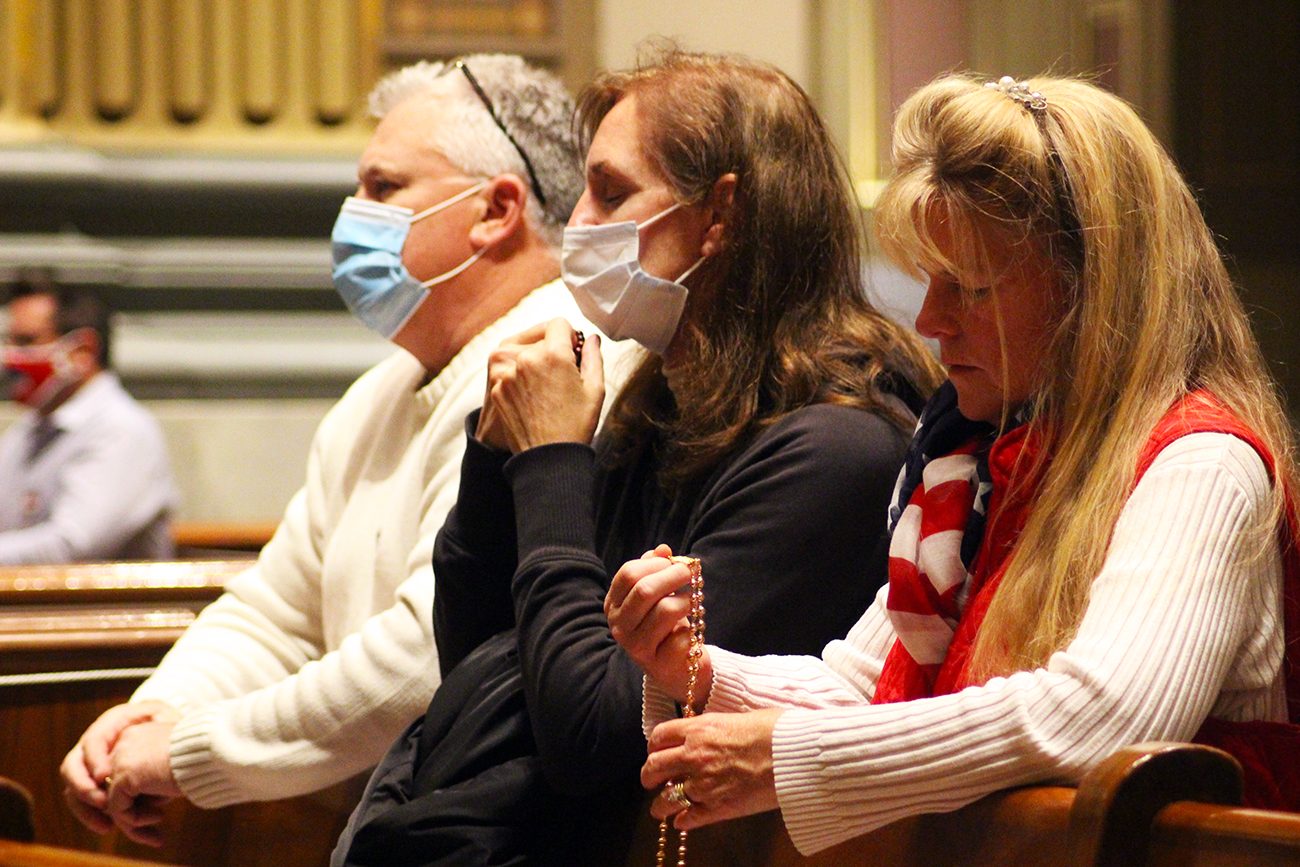 Participants recite the rosary during a Nov. 1 holy hour for the U.S. general election hosted by the Cathedral Basilica of SS. Peter and Paul. Several archdiocesan parishes offered similar gatherings as the nation headed to the polls. (Photo by Gina Christian)

Hours before the close of the general election, hundreds of area faithful gathered in prayer at parishes throughout the Archdiocese.

On Sunday, some 300 participated in a “Holy Hour for the Election” at the Cathedral Basilica of SS. Peter and Paul.

“We are convinced of the power of prayer, especially through the intercession of our Blessed Mother before the most Blessed Sacrament,” said event organizer and Cathedral rector Father Dennis Gill. “And our prayer is to pray for God’s provident hand in the upcoming general election.”

Prior to the event, attendees had registered (through the archdiocesan Office for the New Evangelization, the holy hour’s co-sponsor) to pray for one of the 50 U.S. states. With the turnout six times higher than expected, Father Gill noted there were “certainly more than 50 people here,” as well as “a wonderful showing of priests and people from throughout the archdiocese.”

“Praise God for that,” he said.

In South Philadelphia, the National Shrine of St. Rita of Cascia hosted a 40 hours devotion Oct. 31 to Nov. 3 led by the Sisters of Life, who focused on “a renewal of faith, peace, healing and unity” from the individual to the national level.

At least 15 other area parishes held similar holy hours, rosaries and Masses, including St. Patrick in Malvern; St. Stanislaus in Lansdale; St. Ignatius of Antioch in Yardley; SS. Peter and Paul, SS. Simon and Jude, and St. Maximilian Kolbe, all in West Chester; St. Mary Magdalen in Media; Annunciation B.V.M. in Havertown; Our Lady of Guadalupe in Doylestown; Visitation BVM in Norristown; St. Katharine Drexel in Chester; St. Joseph in Aston; and Our Lady of Perpetual Help in Morton. 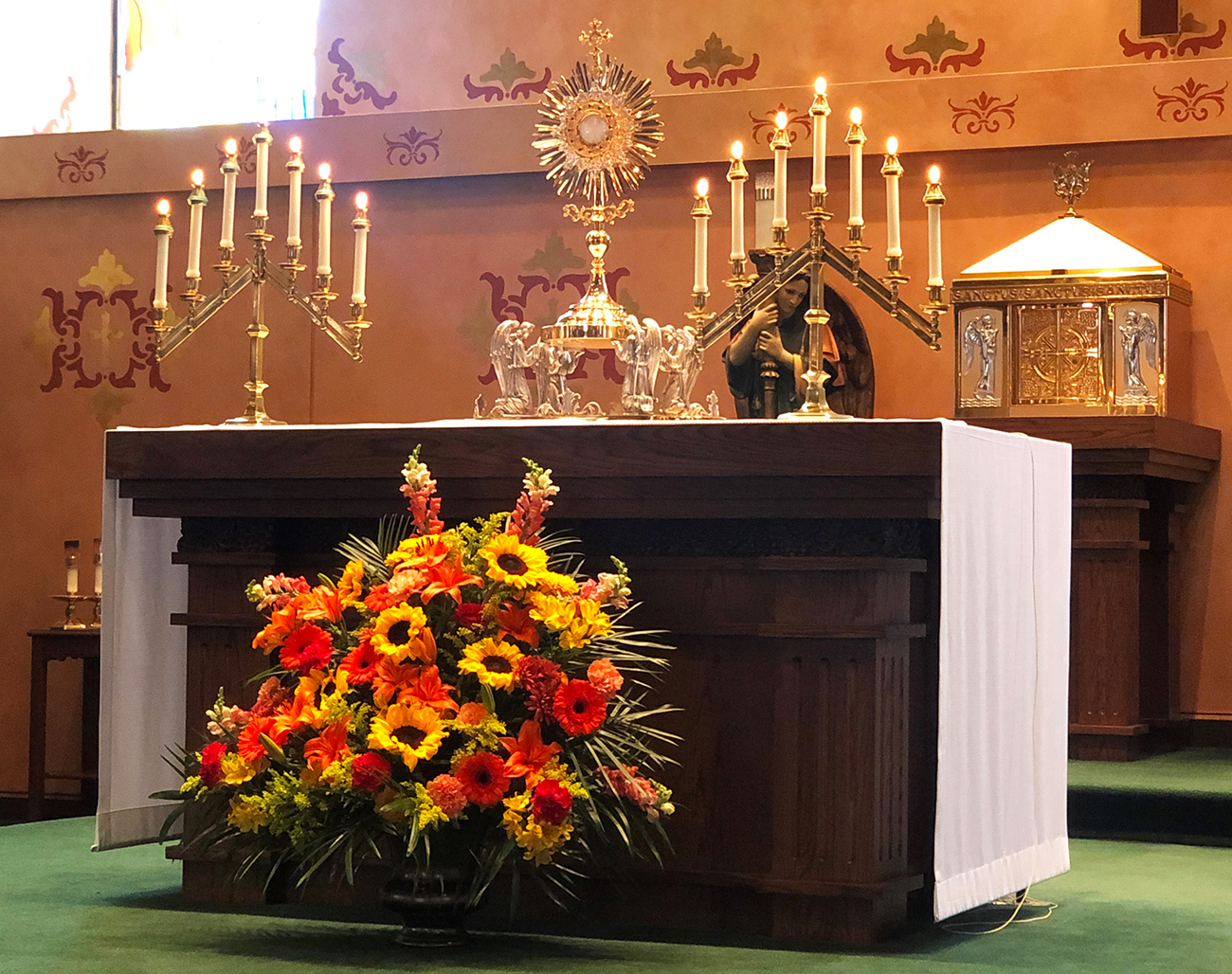 Hundreds of area faithful visited the Blessed Sacrament, seen here during a recent 40 hours devotion at Nativity of Our Lord Parish in Warminster, in the hours before the close of the general election. (Photo courtesy of Father Joseph Watson)

The Fatima Retreat House Center, located in Bedminster, opened its St. Joseph Chapel for prayer, and Nativity of Our Lord Parish in Warminster extended its normal Tuesday eucharistic adoration until 12 a.m. on Nov. 3.

“This was Election Day, and we need to pray for our country,” said Father Joseph Watson, pastor, adding that attendance averaged as high as 30, with some dozen adorers still in the pews as he concluded with Benediction as the clock struck midnight.

A regular eucharistic adorer, she added that her prayer was for a peaceful conclusion to the election process, and that “everybody accepts (the outcome), whichever way it goes.”

That desire for unity was evident among a number of area faithful who attended Election Day holy hours.

“It was my pleasure to be here, to help support Mother Church in this time of need,” said Cynthia Brown, who led a decade of the rosary at the Cathedral’s Nov. 1 holy hour.

A Tolton Ambassador, Brown emailed hundreds of invitations to the holy hour, and stressed the importance of both peace and prayer in the electoral process.

“We are one church, a universal church, and we will be a universal nation with the intervention of Mary, the Mother of God,” she said.

“I think it’s a very critical time in our country’s history, and it needs God more than ever,” said Koons. “It needs his grace and mercy. There’s just a lot going on, and there’s always a lot at stake, but I think it’s become more and more evident in recent years.”

Malamood said she was “moved to just come and offer” herself.

“And that’s what I hope to do in the rest of our lives, building the kingdom of God while here on earth,” she said. “We can pray and we can hope and we can look for unity regardless of the outcome of this election. Our country and our own church is in dire need of unity, and the Holy Spirit can bring that.”