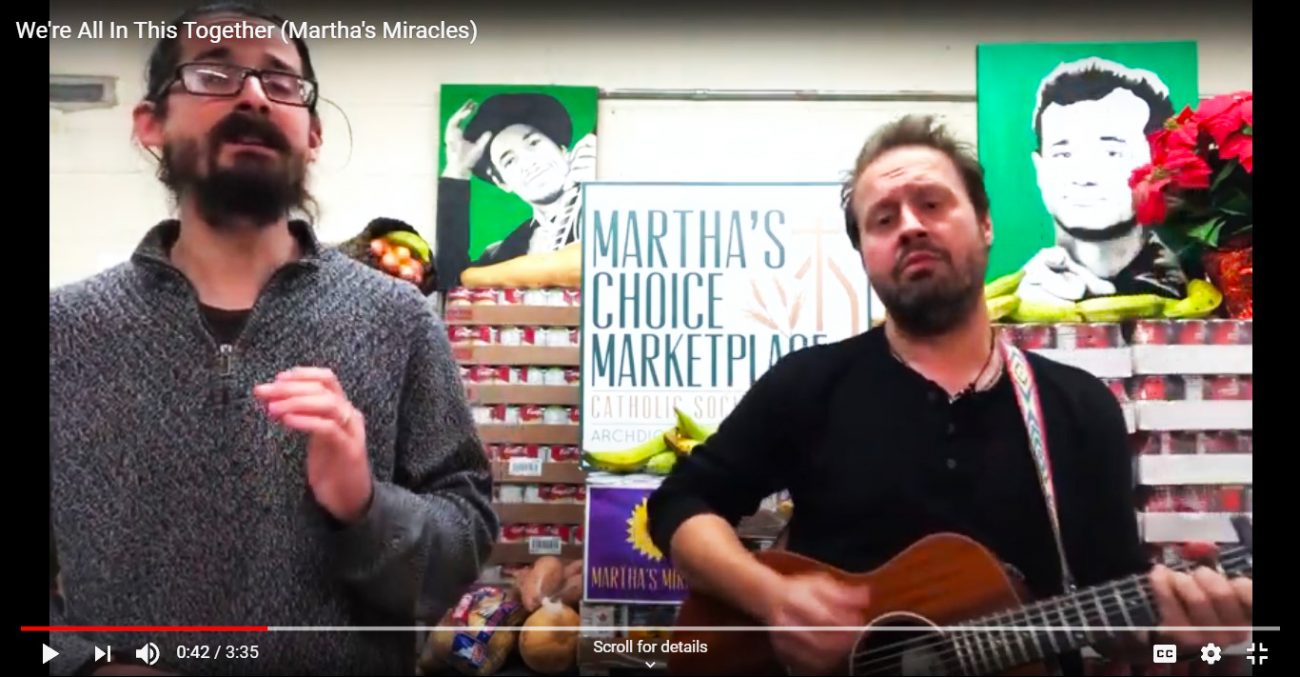 Two managers of an archdiocesan food pantry have released a new music video as a fresh way to fight hunger.

Patrick Walsh and Eli Wenger of Martha’s Choice Marketplace have set their mission to music in “We’re All in This Together,” a three-minute original piece describing their work and inviting listeners to become regular donors.

Located in Norristown, Martha’s Choice is operated by archdiocesan Catholic Social Services (CSS) at its Montgomery County Family Service Center on the campus of St. Paul Parish, one of six CSS sites throughout the Philadelphia area. The outreach’s name recalls Martha, the sister of Mary and Lazarus, whom Scripture describes as providing hospitality to Jesus (Lk 10:38-42, Jn 12:2).

Prior to COVID, the pantry distributed anywhere from 55,000 to 75,000 pounds of food per month, averaging 850,000 pounds per year among Montgomery County clients qualified for the USDA-funded emergency assistance food program in Pennsylvania (TEFAP).

During the early stages of the pandemic, however, client volume soared by almost 200% — from about 250 families a week to nearly 700, said Walsh and Wenger.

Since July, those numbers have scaled back to pre-COVID levels, but the number of first-time visitors is close to double what it was. For many of these clients, accessing any kind of charitable aid is a first.

“In one case, a lady finished her pickup, and then when she saw how much food she received, she got right back in line, nearly crying, just so that she could personally thank everybody for their help,” said Walsh.

He and Wenger cited the pantry’s “dignified process” of food distribution as key to setting clients — some too embarrassed to make eye contact — at ease.

Rather than simply collect prepackaged boxes of staples, clients select the actual items they need and want, just as they would in a grocery store. Stock is displayed as in a retail supermarket, and clearly labeled in three languages: English, Spanish and, to accommodate the area’s large Coptic Christian population, Arabic.

After a decade as a standard food bank, Martha’s Choice shifted in 2015 to this “choice model” of emergency food assistance. The grassroots concept was developed in the early 1990’s by John Arnold, a Michigan-based pioneer of food banks and author of “Charity Food Programs That Can End Hunger in America.”

Nutrition is prioritized at Martha’s Choice, since studies have shown that health issues such as diabetes and heart disease tend to disproportionately affect those at lower income levels.

The order is one of several organizations that supplement the pantry’s core financing from CSS. Other benefactors include the annual Catholic Charities Appeal, archdiocesan Nutritional Development Services, the Knights of Columbus and the Boy Scouts, as well as area colleges, businesses and archdiocesan parishes. Approximately 500 volunteers round out the pantry’s resources.

But “bold new projects” are “necessary to meet these challenging times head on,” said Walsh, listing examples such as “vital new technology” and delivery services for elderly and mobility-challenged clients.

To fund these efforts, he and Wenger created the Martha’s Miracles program, which enrolls regular donors to ensure a “reliable and sustainable budget” as the pantry responds to critical needs in the community.

And to invite those donors, Wenger and Walsh – who describe themselves as “penniless musicians for most of their adult lives” – picked up their instruments and hit “record” on their cell phones.

The result was an upbeat mix of strumming, singing and spoken word, with more than a dash of humor.

“Now, we will graciously accept your one-time, one million dollar donation,” Wenger advises listeners. “But we are also more than grateful for your $5 a month.”

The duo’s camaraderie – “we’re united in absurdity and grace,” said Wenger – is evident in the performance, and the sentiment extends to the Martha’s Choice community as a whole, said Walsh.

“We love and survive only if we are willing to see one another as true brothers and sisters,” he said. “It’s impossible not to grow and become transformed in a place like this. You get to see God moving in people, you get to see God within people. If you’re open, you get to see and feel God working in you.”

To learn more about Martha’s Choice Marketplace (353 E. Johnson Hwy., Norristown) and to enroll in the Martha’s Miracles program, visit the pantry’s website. Food donations are accepted Tuesdays through Fridays between 9 a.m. and 1 p.m. The following items are particularly needed: cases of Ensure, children’s breakfast items, cooking oil and Thanksgiving donations of turkeys, stuffing and other holiday table items. The pantry is also looking for size 5 and 6 diapers, as well as Amazon gift cards for its Christmas program.

NEXT: Prayer, silence and ‘falling in love with God’ key to vocations