Prayer, silence and ‘falling in love with God’ key to vocations 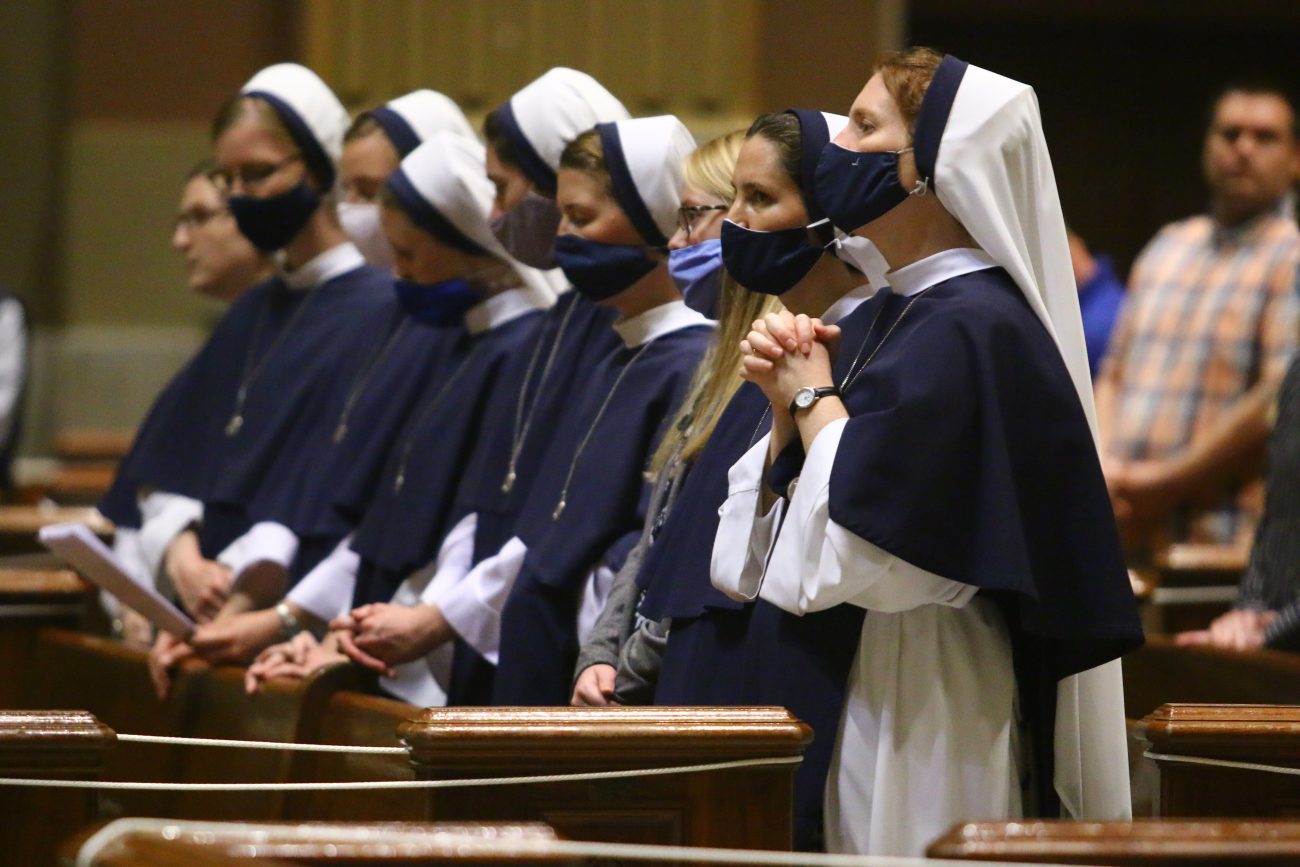 The Sisters of Life participated in a Sept. 27 Mass at the Cathedral Basilica of SS. Peter and Paul that marked the start of the 40 Days for Life campaign to end abortion. Cultivating a robust prayer life is essential to the process of discerning a vocation, said two archdiocesan experts. (Photo by Sarah Webb)

As the Catholic Church in the U.S. celebrates National Vocation Awareness Week (Nov. 1-7), prayer remains central to fostering the call to religious life.

“We have to be able to silence the soul, to silence the heart,” said Religious Sister of Mercy Gabrielle Mary Braccio, the archdiocesan delegate for consecrated life.

Distractions such as “constant cell phone use” can sideline youth and young adults from discerning their vocations, which “begin at baptism, when the seeds for consecrated life, priesthood and marriage are planted,” she said.

Father Steven DeLacy, vocation director for the diocesan priesthood in the Archdiocese of Philadelphia, agreed, describing “the capacity to pray” as the “first and foremost” factor influencing vocations.

“The deeper our prayer life is in general, the more in tune we are with doing God’s will on earth as it is in heaven,” said Father DeLacy, whose office hosted a Nov. 1 holy hour for vocations at St. Maria Goretti Parish in Hatfield.

In fact, he said, “there’s not a vocation shortage in terms of God’s calling people” to either religious or married life.

Rather, “it’s a response crisis, a courage crisis,” said Father DeLacy. “Sometimes people are too afraid.”

Both Sister Gabrielle and Father DeLacy said such fear is often masked by a desire for constant busyness and sensory input. 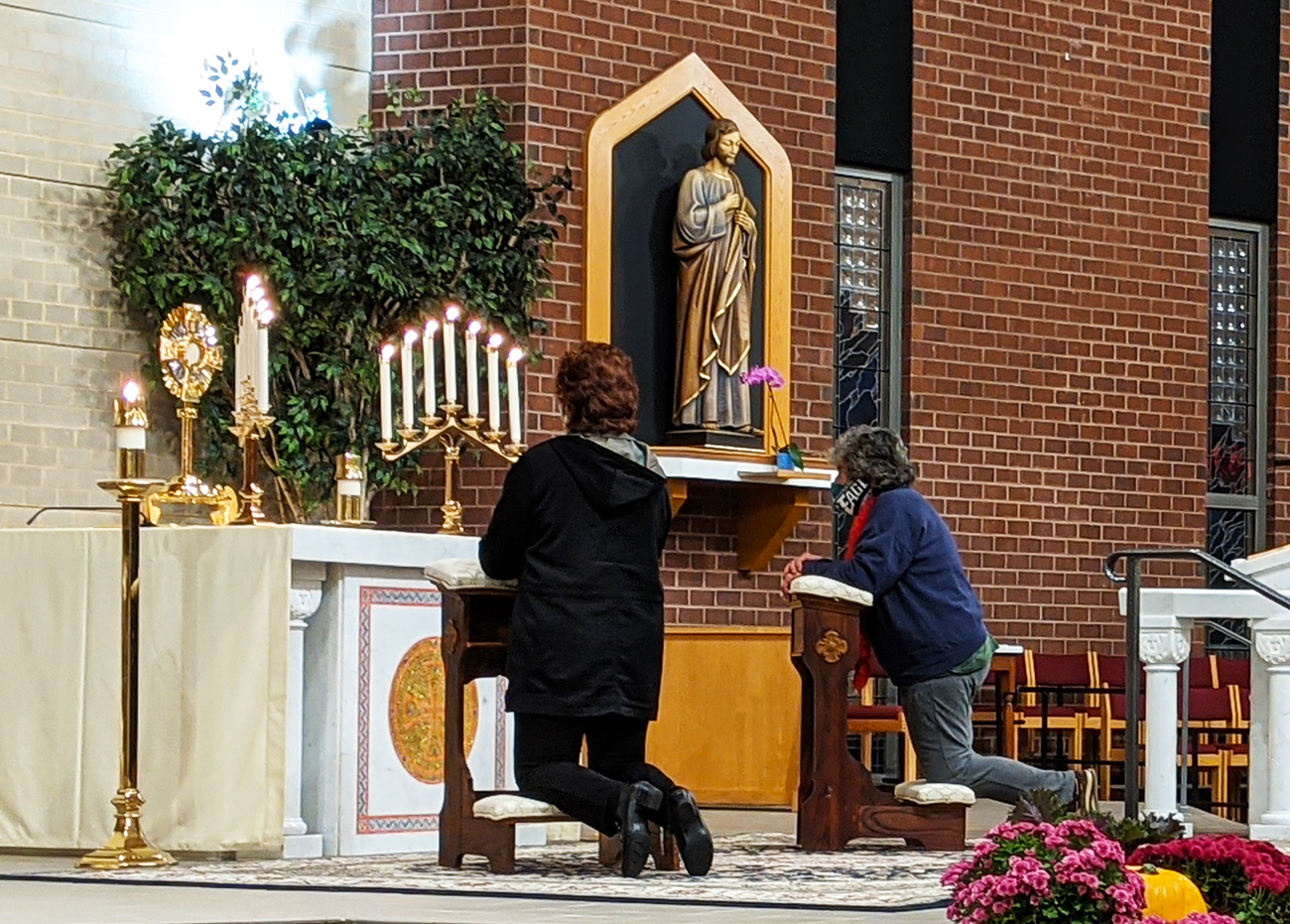 Adorers kneel before the Blessed Sacrament during a Nov. 1 holy hour for vocations at St. Maria Goretti Parish in Hatfield, sponsored by the Archdiocesan of Philadelphia’s Vocation Office for the Diocesan Priesthood. (Photo by Susan Matour)

Even well-intended efforts to “do a million good things” can “leave us so overtaxed that we literally push God out of our lives,” he said.

In a culture that places a high value on accomplishments, youth are particularly at risk for spiritual atrophy, he added.

“Young people tend to think, ‘Why be involved in one activity when you can be in 12?’” said Father DeLacy. “That’s extremely unhealthy in the spiritual (realm).”

A fear of being inadequate for religious life, though understandable, also misses the mark, he added.

“Nobody could be a good priest or religious or spouse on their own,” said Father DeLacy. “We need Jesus to do it through us. Fear needs to be turned into faith. We have to say, ‘I believe you can do it through me.’”

The sacraments “play a crucial part” in enabling youth and young adults to discern their vocations, said Sister Gabrielle.

Regular Mass attendance and confession provide vital starting points for vocational direction, she said, noting that individuals often confide an initial desire for religious life while in the confessional.

The witness of other faithful Catholics is also a powerful influence, said Father DeLacy.

“The more people out there who clearly demonstrate they’re making the will of the Father their top priority, the more others will be inspired to do the same,” he said. “Vocations all around, to both religious and married life, will flow so naturally.”

While the COVID-19 pandemic has hampered many discernment activities, vocations to the priesthood in the archdiocese have followed what Father DeLacy described as a “steady upward trend.”

At present, 65 seminarians are in formation at St. Charles Borromeo Seminary in Wynnewood, he said, with another 10 young men “overtly making it clear they are very interested in entering next fall.”

Sister Gabrielle said she was encouraged by “a definite increase in vocations for both men and women within the archdiocese” over the past several years.

Regardless of time or trends, the essence of the call to religious life remains the same, said Sister Gabrielle.

“You have to fall completely in love with God,” she said. “And then everything else starts to unfold.”

NEXT: St. Charles seminarians step up to serve, again, during pandemic