St. Charles seminarians step up to serve, again, during pandemic 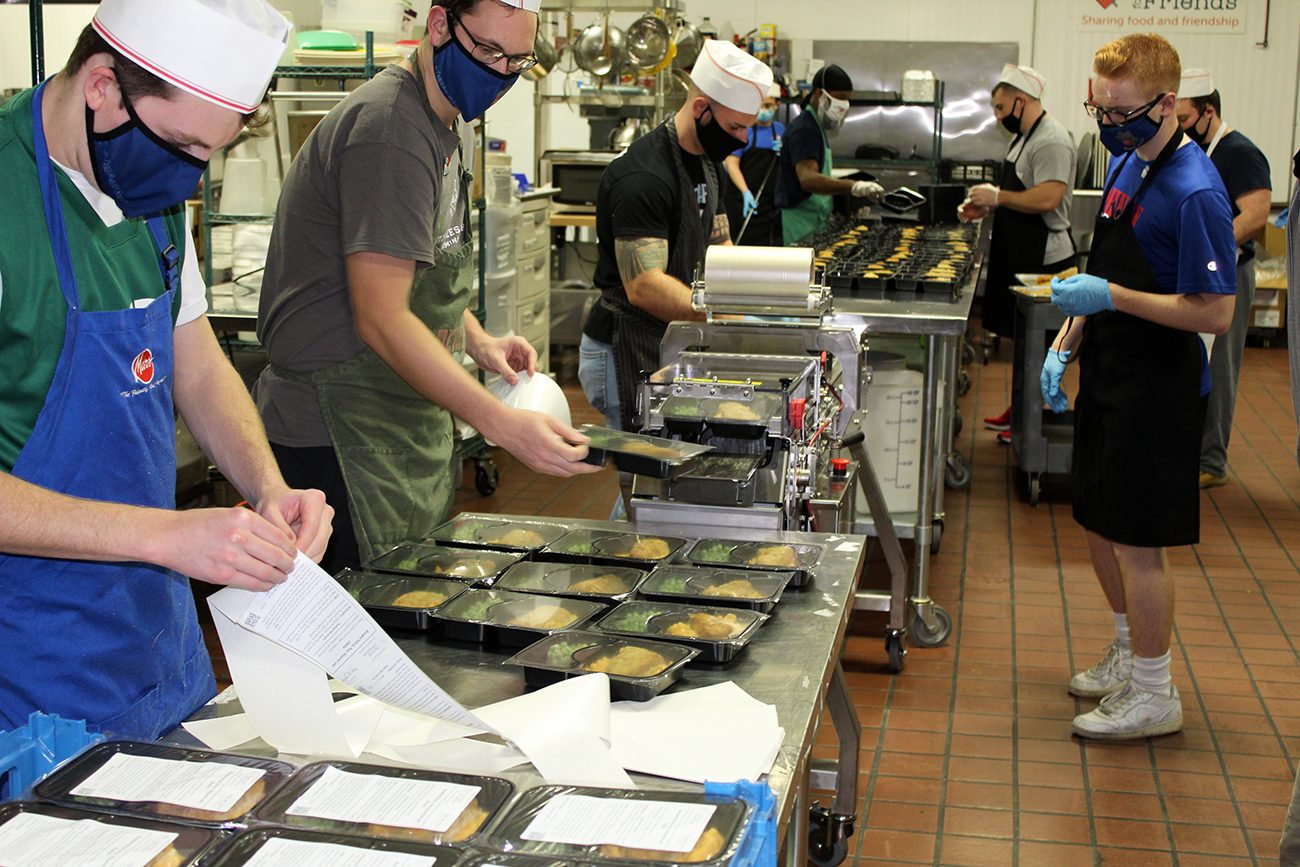 Seminarians prepare meals in the Caring for Friends kitchen, including labels with ingredients and nutritional information. (Photo by Matthew Gambino)

A century ago seminarians from St. Charles Borromeo Seminary in Wynnewood helped bury Philadelphia’s dead in the global Spanish influenza pandemic. This year the young men of St. Charles are helping to keep hungry people alive during the current COVID-19 pandemic.

Apostolic work in addition to classroom studies has long been a regular part of the seminarians’ formation in which they fan out two-by-two to schools, senior facilities and other settings to serve people in the community.

But because of the social restrictions of COVID, those opportunities for service are gone this year. In their place arose a partnership between the seminary’s apostolic formation program, led by Father George Szparagowski, and Caring for Friends, a private multi-service organization feeding hungry people throughout the area for 46 years.

On a sunny Thursday afternoon Nov. 5, 16 seminarians of St. Charles’ College Division traveled to Northeast Philadelphia for a four-hour shift at Caring for Friends, assembling meals and boxing them for distribution to people in the five county-Southeastern Pennsylvania region.

(See a photo gallery of the work here.)

The young men split into groups, with some assembling nutritionally balanced meals in single-serving trays in the spacious kitchen. Others worked an assembly line placing seven meals in a box, stacking the boxes on pallets in collaboration with the group Muslims Serve and some young men from the Church of Jesus Christ of Latter Day Saints, and storing the meals in walk-in freezers for later distribution to homebound seniors.

Meanwhile in center city Philadelphia, another group of about a half-dozen seminarians handed out food to homeless visitors at Hub of Hope, a shelter run by Project HOME out of Suburban Station.

Directly feeding the neediest in the community “is eye-opening, and pretty awesome,” said Adam Johnson, a fourth college seminarian studying for the Diocese of Trenton. “In helping other people, we’re putting faith in action.”

His classmate Rob Bollinger, a member of St. Agnes Parish in Sellersville and a Philadelphia seminarian, put his experience in a broader perspective.

“There’s something really beautiful about serving,” Bollinger said. “It feeds my daily life in the sense that it’s not something temporary (but) more meaningful because it’s not self-serving, but it’s serving others.”

All 24 men in the College Division work every other week at Caring for Friends and food centers such as Hub of Hope “to grow in the virtue of charity,” said Father Szparagowski.

He praised the service partnership and said the seminarians enjoy their experience “because it builds up fraternity. We all work together (and) we look forward to it.”

“They see the purpose of their work — feeding people — especially people who come in to pick up food (at parishes). They didn’t realize how many people in Philadelphia need help. A lot of times it’s working-class people that just need food assistance, and that really surprised them. They love helping people, and they love the interaction,” he said.

Especially grateful to provide seminarians with a way to serve the community and to add to the ranks of volunteers he greatly needs is Vince Schiavone, CEO of Caring for Friends.

Formerly called Aid for Friends, it was begun by his mother Rita in her Northeast Philadelphia home. Her vision was to set aside some of the family’s dinner each night and bring it to lonely, homebound seniors and deliver them a home-cooked meal and companionship. That work continues under a new name and a greatly expanded mission. 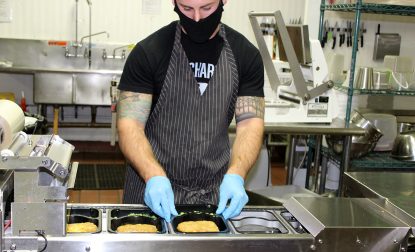 Today Caring for Friends’ threefold mission continues to include serving seniors. Individuals still provide single-serve meals in aluminum trays, and along with the meals prepared at Caring for Friends’ kitchen, they are frozen and distributed to seniors from its warehouse.

But the operation has ramped up significantly this year. Schiavone said before the COVID pandemic hit, his organization was supporting 2,000 seniors through meals and boxes of food delivered each month in the region. That number has swelled to 33,000 seniors currently.

Caring for Friends also is a food bank that, according to Schiavone, supports shelters, recovery houses and some 250 community food cupboards at parishes throughout the Archdiocese of Philadelphia and all houses of worship.

His organization also operates a “caring kitchen” where a great deal of food is prepared to be handed out wherever the needs for food exist. That includes making 850 sandwiches each week for one organization alone – the local St. Vincent de Paul Society – and distributing snack bags made by school children and community groups throughout the region.

This is the mission of service in which the St. Charles seminarians are immersed.

“Seminarians are helping in a time of great need,” Schiavone said.

This November presents everyone with opportunities to support seminarians as well as the mission of feeding one’s neighbors during a time of crisis.

Schiavone raised the call for donations of food and for volunteers to help prepare and deliver more than 2,000 Thanksgiving dinners, including turkey and all the trimmings, for local seniors.

And the seminarians are preparing to visit archdiocesan parishes to ask for prayerful and material support from parishioners during the annual St. Charles Borromeo Seminary Appeal.

“It’s a holy place,” said seminarian Adam Johnson of his seminary community. “Guys want to bring faith to people. We need their support. Once we get out, we can help them.” 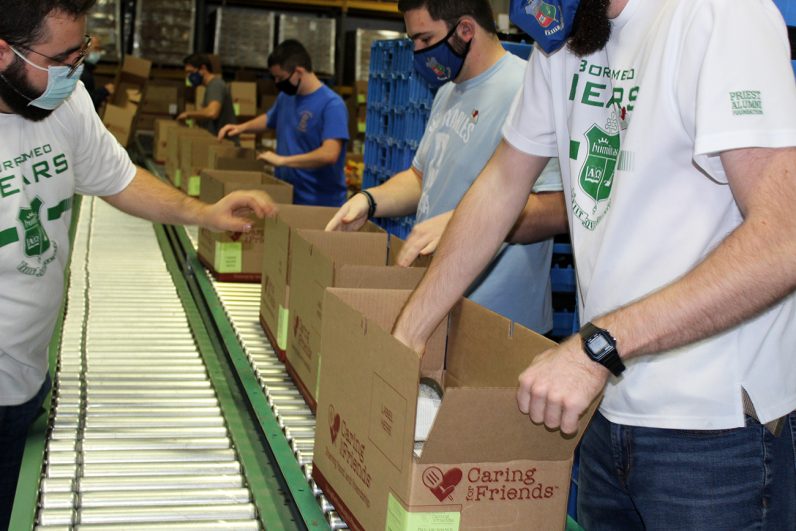 Seminarians including Anthony Gentile (left), fourth college, pack seven prepared meals per box, which will be stored in Caring for Friends’ freezers for distribution by volunteers to area seniors.

PREVIOUS: Prayer, silence and ‘falling in love with God’ key to vocations