As many expected, presidential contest not settled after Election Day 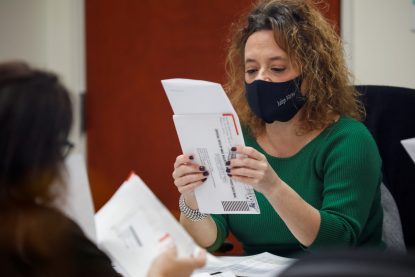 A woman checks a ballot at the Miami-Dade County Elections Department during the presidential election in Miami Nov. 3, 2020. (CNS photo/Marco Bello, Reuters)

WASHINGTON (CNS) — The U.S. remains uncertain about the winner of the presidential race after Election Day, as a counting of the vote continues, showing Democratic candidate Joe Biden ahead in electoral votes, but not by much.

By 3 p.m. Nov. 4, projected results from The Associated Press showed Biden ahead with 248 electoral votes compared to incumbent Republican President Donald Trump’s 214. To win, a candidate needs to reach 270.

Results in Nevada, expected to be updated Nov. 5, as well as in states rich in electoral votes such as Pennsylvania and Michigan, remained unsettled with millions of votes still being counted Nov. 4. But it didn’t stop Trump from declaring an early victory and making comments about getting the Supreme Court involved, prompting outcry from Republicans and Democrats.

“Frankly, we did win this election,” the president told supporters gathered at the White House at 2 a.m. Nov. 4, adding that “we’ll be going to the U.S. Supreme Court” and saying, “We want all voting to stop.”

But even supporters of the president and members of his party protested the comments. Mail-in votes postmarked by Election Day are accepted in several states and many are typically counted in the hours or days after the election, making it unclear what the president was referring to or what legal challenge he could possibly raise.

“All these votes have to be counted that are in now… Tonight was not the time to make this argument,” said Republican Chris Christie, the former governor of New Jersey, who has helped Trump with his campaign. “I disagree with what he did tonight.”

“Stop. Full stop. The votes will be counted and you will either win or lose. And America will accept that. Patience is a virtue,” Republican Congressman Adam Kinzinger of Illinois wrote on Twitter, referencing a tweet by the president that said, “We are up BIG, but they are trying to STEAL the Election. We will never let them do it. Votes cannot be cast after the Polls are closed!”

The Trump campaign said Nov. 4 that it would file lawsuits for recounts in Michigan and Wisconsin.

“It’s not my place or Donald Trump’s place to declare who has won this election,” Biden said to a group of his supporters gathered at a drive-in rally in Wilmington, Delaware. “That’s the decision of the American people.”

The Catholic social justice lobby Network in a statement said it had organized “over 420 Catholic sisters and their allies in Michigan, Pennsylvania and Wisconsin to send letters to their secretaries of state urging a fair election and full count of the votes.”

Sister Simone Campbell, a Sister of Social Service and head of Network, said the women religious had made it clear that “vote counting is a moral obligation.”

“Every vote counts, and we must count every vote,” Campbell said in the statement. “Donald Trump’s reckless attempts to disenfranchise millions of people across the country struggling during this pandemic is shameful and will not be tolerated.”

“In a secular democracy,” she added, “voting is the closest thing we have to a sacrament, and we will do everything we can to protect this sacrament. … It doesn’t matter how long it takes, a full count is the only way to achieve a valid result for our nation.”

By midday Nov. 4, Trump’s 2020 campaign manager, Bill Stepien, said the campaign had officially filed a lawsuit in the Michigan Court of Claims to halt counting of ballots because the “presidential race in the state remains extremely tight as we always knew it would be.”

Trump’s campaign, he said, filed to stop the counting until it is granted “meaningful access” to the numerous counting locations “to observe the opening of ballots and the counting process, as guaranteed by Michigan law.”

While many expected unrest, many U.S. cities that had been boarded up prior to Election Day remained calm. Most of the angst was reserved for Twitter where Benedictine Sister Catherine Wybourne, of the United Kingdom, who goes by the handle @Digitalnun tweeted early the day after the election:

“One of the (many) good things about living in a #monastery: we don’t have to listen to incessant news updates about #politics. If you’re feeling overwhelmed, tune out of the noise & tune into the silence, wherever you are.”

Bishop John E. Stowe of Lexington, Kentucky, who also is bishop-president of Pax Christi USA, asked for prayers for a just and peaceful outcome and for the unity of the nation after a bitter contest.

“Whoever attains the magic 270 electoral votes will need to be held accountable,” he said. “Whoever leads us forward will need help in uniting a bitterly divided nation. Whoever emerges as president will need to be reminded that our democracy is fragile, to be cherished, and needs serious repair.”

The Catholic bishops of Montana in a Nov. 4 statement said that while waiting for the results of the presidential race, they would offer prayers so that those chose to serve in elected offices would keep their hearts and mind attuned to the vulnerable.

“While we find ourselves living through a tumultuous time, we have persevered in faith through contentious elections and daunting challenges before,” they said in the statement.

They said the ideals of the country and “principles of faith” call on people to be courageous and choose “the path of peaceful dialogue over violence and dehumanizing rhetoric.”

NEXT: Voters in Louisiana, Colorado decide on abortion measures