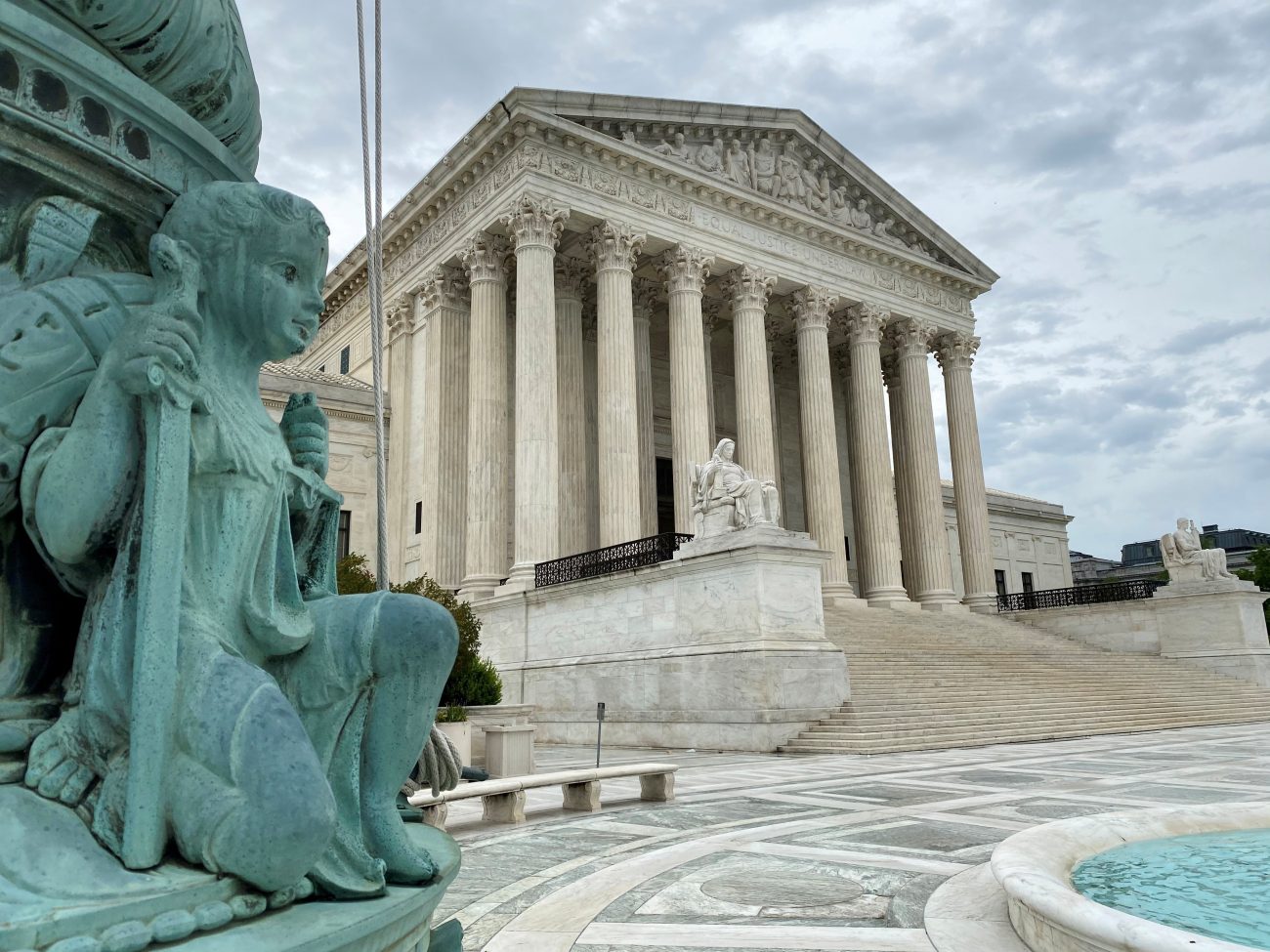 The U.S. Supreme Court in Washington is pictured May 3, 2020. In a 5-4 opinion, the court late Nov. 25 sided with the Diocese of Brooklyn, N.Y., and two synagogues in ruling that some of New York Gov. Andrew Cuomo's pandemic restrictions on houses of worship violated the First Amendment guarantee of religious freedom. (CNS photo/Will Dunham, Reuters)

The Diocese of Brooklyn, New York, and two Orthodox Jewish synagogues in separate filings appealed to the nation’s high court, claiming the governor’s executive order violated their free exercise of religion and was particularly unwarranted during a time when area businesses were open.

This summer, the court, in another 5-4 decision with a different bench, one that included Justice Ruth Bader Ginsburg, upheld Nevada’s limits on congregation sizes, denying a request by a Nevada church for permission to have larger gatherings, like those permitted in the state’s casinos, restaurants and other businesses.

“I am gratified by the decision of the justices of the U.S. Supreme Court who have recognized the clear First Amendment violation and urgent need for relief in this case. I am proud to be leading the Diocese of Brooklyn and fighting for our sacred and constitutional right to worship,” said Brooklyn Bishop Nicholas DiMarzio in a Nov. 26 statement.

The bishop noted the governor’s restrictions “were an overreach that did not take into account the size of our churches or the safety protocols that have kept parishioners safe. Catholics in Brooklyn and Queens have adhered to all COVID-19 safety protocols to attend Mass and receive the Eucharist. Our churches have not been the cause of any outbreaks.”

He stressed that the diocese took its plea to the nation’s highest court “because we should be considered essential, for what could be more essential than safely gathering in prayer in a time of pandemic?”

“Now, with the benefit of the Supreme Court’s ruling,” he said, “we look forward to continuing the fight in the lower courts to ensure that these unconstitutional restrictions are permanently enjoined once and for all.”

The New York State Catholic Conference, the public policy arm of the state’s bishops, tweeted Nov. 26 that the court’s decision was “an important one for religious liberty.”

“While we believe, and the court agreed, that the ‘hot zone’ restrictions on religious gatherings were unduly harsh our churches have been otherwise eager partners with the state in protecting the health of our parishioners, clergy, staff, and surrounding communities during this devastating pandemic.,” the tweet said. “That will continue, as protecting the vulnerable is a pro-life principle.”

“We are proud of the success we have had in keeping our people safe,” it added.

Bishop Edward B. Scharfenberger, who heads the Diocese of Albany and also is apostolic administrator of the Diocese of Buffalo, similarly welcomed the ruling and the view that worship is essential.

“We have an obligation to do everything we can to protect one another from the threat that the coronavirus poses. At the same time, we welcome this decision that upholds the First Amendment’s free exercise clause. Food and drink for the soul are as essential as food and drink for the stomach,” he said in a statement.

New York Cardinal Timothy M. Dolan Nov. 26 tweeted his congratulations to Bishop DiMarzio and the Brooklyn Diocese “on their victory for religious freedom in the U.S. Supreme Court. Our churches are essential.”

“While we have been and will continue to adhere to all safety protocols to protect our communities, it is also important to protect that fundamental constitutional right, religious liberty,” he added.

The Diocese of Brooklyn filed an emergency application with the U.S. Supreme Court Nov. 12 for an injunction against the governor’s executive order limiting in-person congregations at houses of worship to 10 or 25 people but allowing “numerous secular businesses to operate without any capacity restrictions.”

The Brooklyn Diocese first went to federal District Court in October to seek emergency relief from Cuomo’s new restrictions, announced Oct. 6, on houses of worship in response to a spike in COVID-19 cases in densely populated ZIP codes he identified as “hot zones.”

He said the state was creating three zones — red, orange and yellow — each with different restrictions, including on the size of congregations.

Some Catholic parishes in the Brooklyn Diocese were in the red zone, meaning their churches were forced to reduce capacity to a maximum of 10 people inside at one time, and some were in the orange zone, where only 25 people at one time can attend Mass. A yellow zone designation meant a 50% capacity.

The Orthodox Jewish synagogues in New York took their appeal to the Supreme Court Nov. 16, stressing they had complied with previous restrictions, but the newer limits would not allow them to conduct services for all of their members.

On Nov. 20, Cuomo urged the Supreme Court not to get involved in the state’s battle with two synagogues, saying that because of “continued progress in containing COVID-19 spread,” the restrictions no longer applied.

He also said his order was not focused on gatherings because they were religious but because they could potentially be “superspreader” events. He also stressed the order could even be seen as treating religious gatherings more favorably than plays and concerts which have similar risks.

The court’s unsigned opinion blocks the state from enforcing these limits on attendance while the Brooklyn Diocese and the synagogues continue their battle with the U.S. Court of Appeals for the 2nd Circuit. The case could potentially return to the Supreme Court for a final decision on its merits.

The justices in the majority said the governor’s order did not appear neutral and seemed to single out “houses of worship for especially harsh treatment.”

Because of this, they said the order was subject to strict scrutiny, which it failed, because there was no evidence that synagogues and churches contributed to COVID-19 outbreaks and less restrictive rules could have been used.

In a separate opinion, Justice Neil Gorsuch said: “It may be unsafe to go to church, but it is always fine to pick up another bottle of wine, shop for a new bike,” referring to the lack of restrictions on businesses in the same areas as the churches and synagogues.

Justice Brett Kavanaugh also filed his own opinion noting the court’s ruling was only a temporary fix until the 2nd Circuit can rule on it. The appeals court is scheduled to hear arguments in the case in December.

He also said if the houses of worship challenging the restrictions do not return to red or orange zones, then the high court’s action “will impose no harm on the state and have no effect on the state’s response to COVID-19.”

A dissent filed by Sotomayor, joined by Kagan, said these cases were “easier” than challenges in the summer by churches in California and Nevada opposing church attendance size because, they said, the New York order treated houses of worship more favorably than comparable secular gatherings.

In the meantime, Harvest Rock Church and Harvest International Ministry in California are seeking intervention by the Supreme Court in a new challenge to Gov. Gavin Newsom’s COVID-19 restrictions.

The church in its early Nov. 25 filing with the court argued Newsom’s limits on houses of worship are “draconian” and, like the Brooklyn Diocese and the synagogues, say they threaten religious liberty.

PREVIOUS: Advent during pandemic can be time to draw closer to Jesus