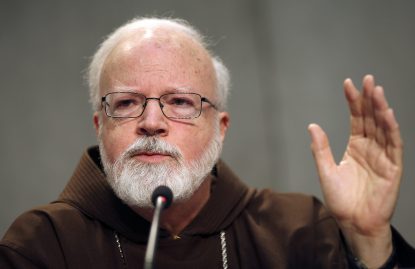 Cardinal Sean P. O’Malley of Boston, president of the Pontifical Commission for the Protection of Minors, is pictured in a 2014 file photo speaking during a briefing at the Vatican’s Holy See press office. (CNS photo/Alessandro Bianchi, Reuters)

BRAINTREE, Mass. (CNS) — The Catholic bishops of Massachusetts Nov. 17 urged the state Senate to reject a budget amendment that would allow girls as young as 16 to get an abortion with the consent of a guardian or a court.

It would remove the current requirement in the law for girls under 18 to get parental consent for an abortion.

The proposed amendment also would allow abortions to be performed for the full term of a pregnancy under certain circumstances, such as the unborn baby being diagnosed with a “fatal birth defect” or condition.

“Abortion at any time, from the moment of conception to birth, is in direct conflict with Catholic teaching and must be opposed,” the bishops said.

It was released in Braintree by the Massachusetts Catholic Conference, the public policy arm of the bishops. The conference also called on Catholics to contact their state senators and ask them to vote “no” on the budget amendment.

The full Senate began debate on it Nov. 17. The measure “closely mirrors” an amendment to the budget the state House of Representatives passed a week earlier, the bishops said.

“Current law requires a young woman under the age of 18 years old to gain the consent of a parent, guardian or the court to have an abortion,” the bishops said. “The amendment under consideration would decrease the age of consent to 16 years old. In its simplest terms, a 16- or 17-year-old girl would be deprived of the guidance and support of an adult at the time of making this life-changing decision.”

With regard to allowing abortions for the full term of a pregnancy, the amendment states a physician can perform such abortions if it is determined the unborn child has a “a lethal fetal anomaly that is incompatible with sustained life outside the uterus.”

The bishops noted the amendment requires that “life-supporting equipment … be in the room for abortions performed after 24 weeks” in case they might result in a live birth.

However, they said, “the specific language in the amendment is nuanced enough that the physician would not be required to use the equipment.”

“Specifically, it would ‘enable’ the physician performing the abortion to take appropriate steps, in keeping with good medical practice … to preserve the life and health of a live birth and the patient,” the bishops said, urging the Senate to reject the amendment.

Massachusetts Citizens for Life also condemned the measure in a statement: “The new language states only that there must be ‘life-supporting equipment’ present, and eliminates the requirement for the abortionist to actually USE it.”

Under current Massachusetts law, an abortion cannot be performed after six months of pregnancy unless “it is necessary to save the life of the mother, or if a continuation of her pregnancy will impose on her a substantial risk of grave impairment of her physical or mental health.”