Voter behavior wasn’t different in the 2020 election, just the results 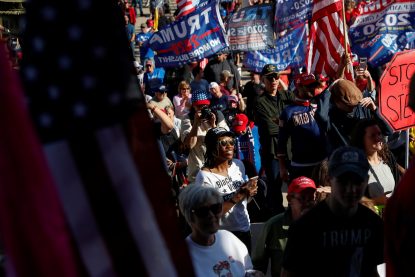 WASHINGTON (CNS) — If there is anything different about the 2020 presidential election, don’t chalk it up to fickle voters.

“The big thing about this election is it happened during a pandemic,” said John K. White, a politics professor at The Catholic University of America, Washington.

That, White said, and “the highest (turnout) since 1900,” with estimates ranging from 66.4% to 72.1% of registered voters casting ballots, with a pandemic-related all-time high in the number and percentage of ballots tendered away from polling places, with voters using the mail or drop boxes instead of risking long lines at election precincts.

“I don’t see unusual behavior in terms of what was on their minds” when voters made their choices, White told Catholic News Service in a Nov. 11 phone interview. “You had the economy, the coronavirus, you had race relations. That’s certainly what shows up in the polling.” But the coronavirus bettered the economy as a top issue by 10 percentage points among those surveyed, according to White.

“The election was a referendum on (President Donald) Trump,” he said. “That’s very typical when you have an incumbent seeking reelection. It was never, as Trump tried to make it, a choice — ‘you may not like me, but Biden is unacceptable’ — that was a very hard thing to do with (President-elect) Joe Biden.”

White added, “I had thought from the beginning that Joe Biden was the only Democrat that could beat Donald Trump.”

On Nov. 7, the media declared Biden the winner of the presidential election, but the Trump campaign has filed lawsuits in several states challenging vote counts.

In elections, a voter’s age and sense of duty were once thought of as the best predictors of who would vote, said Jon Krosnick, a professor in three departments — political science, psychology and communications — at Stanford University. 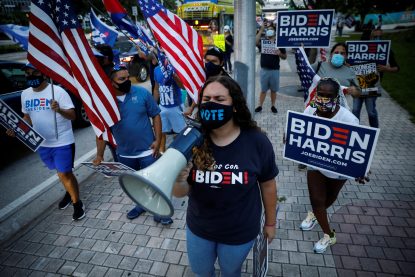 Voters are now seen as making their choices over a series of factors that resemble “soup that ingredients have been thrown in,” Krosnick said.

First comes a set of criteria on “the health of the nation: how well we are doing economically, how well we’re doing in terms of our safety and security, presidential approval — how do I feel about his performance in a particular domain. There are also factors involved of perceptions of the personalities of the candidates,” Krosnick told CNS.

Then, there are four attributes considered by the electorate: competence, integrity or honesty, compassion and, finally, strength of leadership. “As a general rule, voters prefer candidates” with these attributes, he said.

“I believe a small number of swing voters behaved differently in that they had given Donald Trump a chance and were not happy with him. But I don’t think the majority of voters — I would say 85%-90% of voters — voted as they had in the last election,” said Fathali Mogghaddam, a Georgetown University professor and director of its interdisciplinary program in cognitive science.

That number does not change much every four years, Moggahaddam said, and has grown into the norm over time because of the polarized nature of our politics,” a concept he calls “mutual radicalization.”

“The center is hollowed out. Unfortunately, this means that dialogue and constructive communication becomes more difficult, Because of mutual radicalization, when groups are pushing one another to become more and more extreme, anybody who dares to take a middle ground is shot at from both extremes,” he said.

Trump drew higher percentages of Hispanic and Black men than analysts had predicted.

Asked whether that meant the GOP is becoming a “men’s party” and the Democrats a “women’s party,” Moggahaddam replied, “I’m not sure it’s going to translate into support for the Republican party as a whole. I think it is specific to the image prepared by Donald Trump — his image of anti-feminism, and his image of appealing to traditional gender roles, the idea that men and women have their traditional gender roles and it’s best for them to stay in those positions.”

In the 2020 election, noted Catholic University’s White, “there are a whole host of life issues. Abortion is certainly one, and an important one. But so is immigration. So is climate. So is the way we treat one another. And you just saw this very active dialogue. Those on one extreme said, ‘You can’t be Catholic and vote for Biden.'”

Biden supports legal abortion. As a Catholic, he says he is personally opposed to abortion but cannot impose his view on the electorate.

“On the other side, (the U.S. bishops’ quadrennial document) ‘Faithful Citizenship’ means informed consciences,” White said. “I think that dialogue is going to continue. I think it reflects what’s going on in Rome with PF (Pope Francis).”

The dialogue was interesting to witness, “and I don’t think it goes away with the election. I think it may continue,” he added. “I see the USCCB (U.S. Conference of Catholic Bishops) issued a rather gracious statement noting and congratulating Biden on his win, noting that they had disagreements with him, but noting there were things they very much agree with him on, like immigration and separation of children (from their parents).”

“Being a Catholic is who he is, and it’s so tied up in his story of tragedy and loss,” White said of Biden. “There’s nothing fake about that. It’s very much part of his cultural identity,” he said, and is what helped Biden prevail not only in the Electoral College and the popular vote, but among Catholic voters as well.

PREVIOUS: In gathering for U.S. bishops like no other, annual meeting goes online

NEXT: Brooklyn Diocese asks high court for injunction on limits on indoor worship