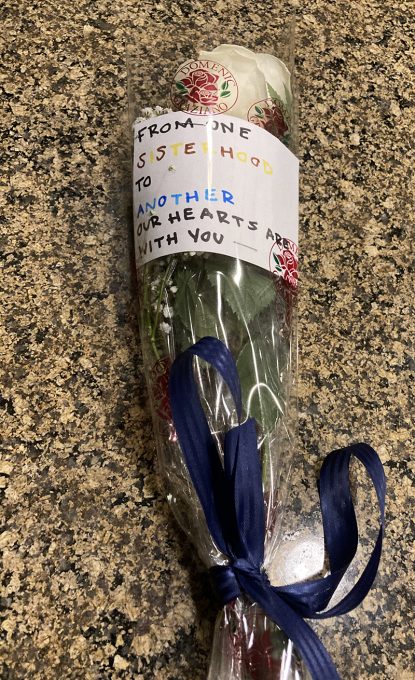 A white rose wrapped with the words, “From one sisterhood to another, our hearts are with you” was the gift of the St. Hubert’s girls soccer team to their John W. Hallahan counterparts at the season finale Nov. 22. Hallahan will close at the end of the 2020-2021 school year.

Other than a championship, a playoff, or perhaps some crazy dramatic ending, most athletes don’t recall too many details of a previous game. Indeed, as time goes on, it’s common to hear them admit that they don’t even remember who won or lost.

For the players who partook in the John W. Hallahan vs. St. Hubert soccer season finale on Nov. 22 at Bryn Athyn College, however, chances are that none of them will ever forget the nuances that, as several players put it, defined what Catholic education is truly about — or, at least, should be.

“One thing people will never truly understand is the sisterhood between every girl at Hallahan, and also the unity between every school within the Philadelphia Archdiocese,” said Hallahan senior Liz Stokes. “Those connections are so unbreakable … it’s a sense of community that I’ve never experienced before.”

Stokes and her Hallahan teammates were less than a week removed from finding out that their beloved school (and Bishop McDevitt High School) would be closing its doors at the end of the school year after more than a century of existence.

The news stunned the entire Delaware Valley, but obviously affected Hallahan students in a profoundly sad and overwhelming manner.

So as they prepared to take on St. Hubert’s in what would be Hallahan’s last soccer game, it was initially impossible to focus entirely on the game.

“When we all arrived to Bryn Athyn’s turf, all of our eyes were filled with tears, but not necessarily of sadness,” said Stokes. “Part of the emotions we were — and still are — carrying is that we will continue the fight to save Hallahan.”

As both teams started stretching and warming up, Hallahan noticed something that immediately touched their heart with indescribable sentiment. Each St. Hubert player had pre-wrapped her hair in Hallahan sky blue; too, each player had a Hallahan sky blue piece of electrical tape draped on her socks.

Before the opening tap off, in the minds and hearts of Hallahan High School, St. Hubert was already a winner.

“I can’t even describe how much respect I have for them,” said Hallahan sophomore goalie Faith Scally, “When I saw them wearing the blue … it’s almost impossible to describe what that does.

“It was a perfect example of sisterhood meeting sisterhood. I felt so supported. Just knowing that we were not standing alone against this. Knowing that they understood, that they were in our corner. Unbelievable.”

The two teams then did their coaches proud by battling back and forth over the next 80 minutes. Hubert took a 1-0 lead on a goal by junior Gianna Grassifulli, but Hallahan responded with tallies by junior Emma Drum and Stokes for a 2-1 halftime lead.

After freshman Angelina Kiniry tied the game for the Bambies, Drum scored again to put Hallahan in front, 3-2. Late in the game, Scally made an aggressive stop on a St. Hubert breakaway. Although the Bambies continued to pressure, Hallahan emerged with a 3-2 triumph and finished their coronavirus-abbreviated season with a 4-1 record; Hubert’s ended up 5-2.

“If there was ever a game we had to win, that was it,” said Scally, a product of Roxborough’s Immaculate Heart of Mary School. “We wanted so badly to show what Hallahan is all about.”

Scally’s sisters Emily and Grace graduated from Hallahan in 2018 and 2020, respectively. Most of her aunts are also Hallahan grads.

“I thought about that – we have something like seven generations of Hallahan grads,” said Scally. “Putting on the Hallahan jersey for what may be the last time, it was probably the most important game I have ever played. There was a lot of pressure.”

Before the game, Hubert senior captains Kaitlyn Lepkowski and Taylor McNamee had organized the purchase of white roses to be presented to Hallahan after the game regardless of the result. Included with each rose was a card that read, “From one sisterhood to another, our hearts are with you.”

“I don’t even have the words,” said Scally. “Extremely classy, especially after a tough game. They had our back. Afterwards, they were telling us that they had been in our shoes (Hubert’s almost closed in 2012).

“That’s what Catholic education is all about.”

Always fierce competitors, Hubert’s players did everything possible to tie the game and extend it to overtime.

During the game, the Bambies weren’t thinking about this being Hallahan’s last game – or in the case of Hubert’s four seniors (Alyssa Burns, Monica Donnelly, Stokes, and McNamee) – their last game, either. It was pure soccer, played with high energy and skill.

“You never want to lose no matter the situation,” said Lepkowski, a soccer goalie and also a lacrosse forward. “It was a tough game. A lot of aggressiveness. A lot of annoyance. But once the whistle blew, it was over.”

After helping distribute the flowers and cards, Lepkowski said there was “a lot of crying” from both teams.

McNamee, who also plays basketball and runs track, sacrificed her own need for closure by concentrating on Hallahan’s.

“Being that it was my last game, too, I was of course sad and upset,” said McNamee. “But this was their day. We helped them out. It was a really rough week. We helped make it a little better for them.

“The game itself was frustrating because we lost, but it was hard fought and they played really good. They needed it, and they deserved it.”

Having scored the last goal in Hallahan history, Drum was asked how it felt to be the answer to a trivia question.

“Bittersweet,” said Drum. “I was happy to help my team get the win, being that it could possibly be Hallahan’s last game ever. Going out there, we knew we wanted to end it with a win. We still have hope that Hallahan will remain open and continue its education for young women.”

As a flurry of emotions cascaded forth, Stokes, who for years represented Immaculate Heart of Mary in CYO athletics, could not help but think of her coaches.

“I will never forget the last 80 minutes I got to play for John W. Hallahan, but also for the two people who inspired and motivated me the most with not only soccer but even when things got tough, my coaches, Shawn Murphy and Pat Cain,” said Stokes, referring to current coach Murphy and former coach Cain, who died in 2019.

“I’m positive that if we could all see Coach Pat standing there on the sidelines with us like he was in spirit Sunday night, he would tell you how special not only Hallahan is, but also how memorable those 80 minutes of play were.

“My hopes and prayers continue to go out to the entire Hallahan community, and I’m glad I have the memories and time spent at Hallahan to carry with me throughout my life.

“Most importantly, we have a sisterhood that can never be forgotten.”
***