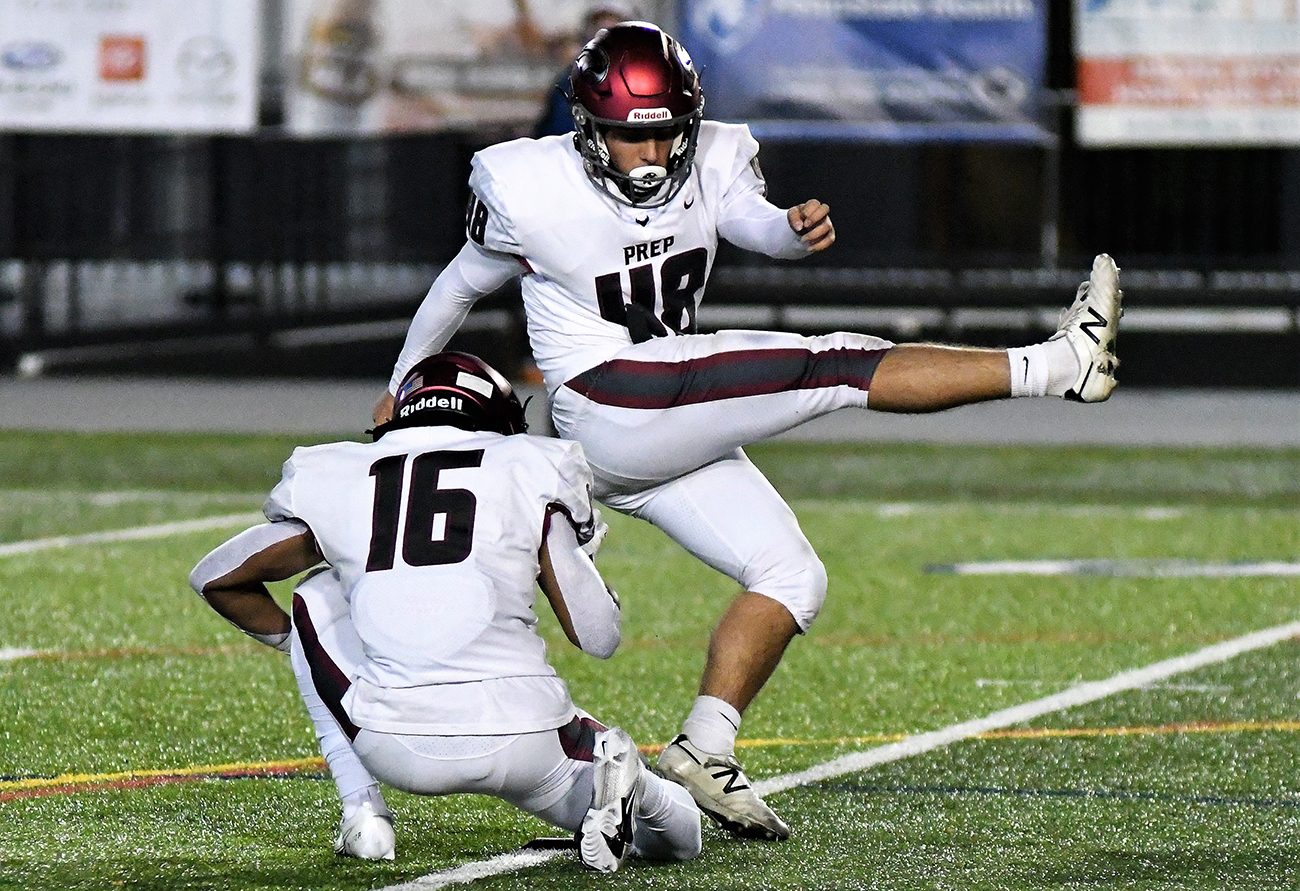 If fantasy football hobbyists were choosing from high school teams rather than those in the NFL, there’s no doubt which placekicker would be the first off the board.

In the PIAA Class 6A state championship Nov. 28 at Hersheypark Stadium, St. Joseph’s Prep scored on almost every single possession while overwhelming Central York High School, 62-13, for their third straight crown, fourth in five years, and sixth in the past eight.

The Hawks’ offensive onslaught has been a constant theme throughout this coronavirus-shortened football season. Most Prep games have required a mercy rule running clock by halftime. While numerous Hawks forged amazing resumes during their six victories, the least noticed may have been Chadha’s.

“I do find myself on high alert every time,” said Chadha, a junior. “As a kicker, you always have to be ready for anything that the coaches ask you to do. That’s part of the fun, though. You never know what is in store for you.”

As a kicker on the Prep’s football team, what’s “in store for you” are plenty of opportunities to smash a football through the uprights.

In the victory over Central York, Chadha executed what amounted to a perfect game. Halfway through the first quarter, he drilled a 39-yard field. By halftime, Chadha had added five straight extra points as the Hawks took an insurmountable 38-7 lead into the locker room.

In addition to booting three more extra points in the second half, the graduate of Bryn Mawr’s St. Aloysius Academy set a personal record when he crushed a 47-yard field goal that would have cleared beyond 50. His reaction – jumping around and high-fiving his mutually jubilant teammates – was priceless.

“For the first field goal, I still had some butterflies within me because it was the opening drive,” said Chadha, a parishioner at St. Thomas in Villanova. “Once I hit it though, my confidence was flowing. As for the second field goal, I was confident walking up to it. Once I kicked the ball and saw it go through the uprights, I got extremely excited. I was glad to celebrate the kick with my teammates.”

Because the Prep is usually so far ahead, Chadha doesn’t have to worry about his right leg deciding a win or a loss. That, however, was not the case last year.

In the state semifinals versus Pittsburgh Central Catholic in Altoona, the Prep trailed by 24-17 in the final minute and needed a sensational touchdown connection from backup quarterback Malik Cooper to Marvin Harrison Jr. with 15 seconds remaining in regulation to set the stage for the most important kick of Chadha’s career.

“We needed the extra point to send it into overtime,” said Chadha. “It may have been a 20-yard extra point, but it felt like a kick to win the Super Bowl. I was super pumped after it went through.”

The Prep went on to win in overtime, and the only mention of Chadha was in the postgame box score. But that’s the life of kickers; you usually only notice them when they kick a game-winning field goal or miss a must kick in the final seconds.

Already a Prep soccer player his freshman year, Chadha made the Hawks’ football team midway through the fall after an impromptu kicking tryout for former coach Gabe Infante. He ended up as the starter for the final seven games of the season, contributing three field goals and 31 extra points.

Last year, as a sophomore, his eight field goals and 64 extra points culminated in being named a first-team All-Catholic.

“I think that the position of a kicker is highly underrated,” said Chadha. “It is kind of crazy to think about whether a game can be won or lost with the kick of a ball. And that does come with a lot of pressure.

“But my teammates and coaches prepare me well in case I am ever in that position. If the game were to come down to a game-winning kick, I am confident that I am able to come through.”

Prep coach Tim Roken, whom Chadha describes as “someone I am so grateful to that I have him in my life; he has had such a positive impact on my life,” is not surprised that Chadha has embraced the kicking position with poise, diligence and humility.

“It’s a blessing in high school to have a kicker that can put the ball in the end zone as consistent as Antonio does on kickoffs,” said Roken. “That consistency carries over to extra points, and he’s improved every year on distance and accuracy of field goals. He’s banged a couple of 50-yards-plus in practice this year.

“He takes great pride in his craft. He’s not a ‘sometimes guy.’ He’s at practice every day and follows a routine.”

In the Prep’s most recent triumph, senior quarterback Kyle McCord completed 21 of 28 passes for 337 yards and fourth touchdowns – two of them to Harrison, his teammate at Ohio State University next year. Senior Sahmir Hagans snared eight passes for 157 yards and a 55-yard score.

The game’s Most Valuable Player was the aforementioned Cooper, another product of St. Aloysius Academy. The Temple-bound senior caught five passes for 116 yards and a 79-yard touchdown. He also threw a 55-yard scoring strike to Hagans and also returned a punt 47 yards for yet another score.

“Antonio has a God-given gift,” said Cooper, who catches the snaps of junior Brendan Leneghan and holds for Chadha’s kicks. “He is a hard worker. I have witnessed him get some extra kicks in after practice to better his craft because we get on him so much about how important he is.

“He definitely doesn’t get the spotlight he deserves. I think it’s time for these colleges to wake up.”

Chadha, who this past March kicked a practice 65-yard field goal at Villanova Stadium that his mother filmed and his 10-year-old brother Matteo fielded in the end zone, recognizes how fortunate he’s been to play inside such a powerhouse offense.

“It’s honestly been an honor to play for this team,” said Chadha. “It is true that they score every time. But I wouldn’t be the player I am today without them. I owe so much to my teammates for always putting me in the position to make me look great. If they aren’t great, I can’t be great. So my I tip my cap to them.”

Although no offers have come through yet, Chadha has heard from some colleges regarding his future plans. He hopes that his kicking ability will translate into a college scholarship, and he admits that he occasionally dreams about kicking professionally some day.

Then again, what high school kicker who booted eight extra points and field goals of 39 and 47 yards in a televised state championship, and who possesses video proof of a successful 65-yard practice field goal, wouldn’t bask in future reverie?

“Coach Roken always preaches that you only can control what you can control,” said Chadha. “I have to focus on getting better, and hopefully, the offers will come soon.”

In the PIAA Class 6A state championship Nov. 28 at Hersheypark Stadium, St. Joseph’s Prep scored on almost every possession while overwhelming Central York High School, 62-13, for their third straight crown, fourth in five years, and sixth in the past eight. (Photo by Bill Avington)

NEXT: Tommy Lasorda, baseball lifer and Hall of Fame manager, dies at 93