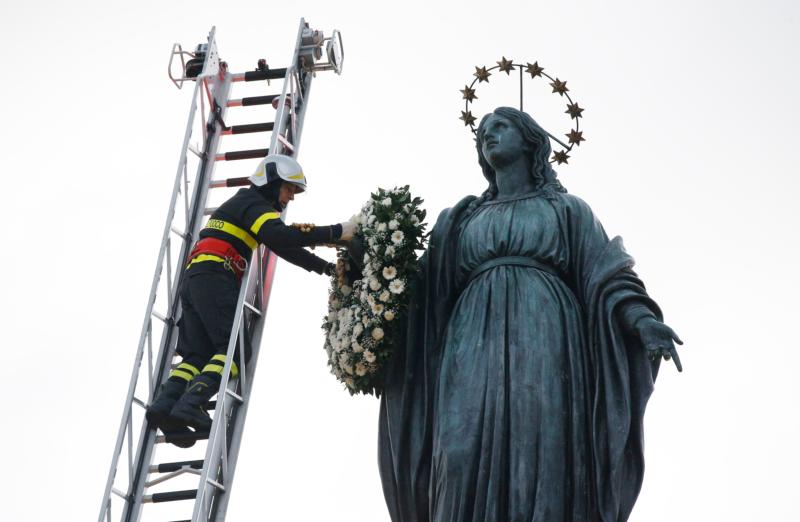 A firefighter places a wreath on a Marian statue overlooking the Spanish Steps in Rome Dec. 8, 2019, the feast of the Immaculate Conception. (CNS photo/Paul Haring)

Mary’s Immaculate Conception is “a spiritual force” that “speaks to each of us” even more powerfully during “these days of enduring pandemic.”

That’s according to Father Dennis Gill, director of the archdiocesan Office for Divine Worship, who said today’s solemnity, which falls just days after the start of Advent, “allows God to prepare us for a new indwelling of his Son in our lives.”

Normally, the Dec. 8 Solemnity of the Immaculate Conception is a holy day of obligation. While archdiocesan faithful are currently dispensed from that obligation due to COVID, the feast is still a time to reflect on “how God prepared Mary to be so worthy a Mother for his Divine Son … conceived without any stain of sin,” said Father Gill.

That mystery, which faithful have honored in some form from at least the seventh century, was officially proclaimed as doctrine by Pope Pius IX in his 1854 apostolic constitution Ineffabilis Deus.

But the actual logic by which Mary could remain free of sin from her conception had long stumped even the best theologians, among them St. Augustine, St. Bernard, St. Anselm, St. Thomas Aquinas and St. Bonaventure.

Thirteenth century Franciscans William of Ware and Blessed John Duns Scotus were instrumental in resolving these difficulties, with Duns Scotus (nicknamed the “Subtle Doctor”) affirming that “God could have conferred as much grace on (Mary) in the first moment of her soul’s existence as he does on another soul at … baptism.”

Duns Scotus explained Mary had been divinely preserved from original sin based on the anticipated merits of Christ’s suffering and death. As a result, her Immaculate Conception showed Christ had exercised “a most perfect act of mediation” that in fact “absolutely indebted” Mary to Christ.

Following this theological breakthrough, belief in and celebration of the Immaculate Conception gained widespread traction throughout Europe. Almost a quarter century before Pope Pius IX’s declaration, St. Catherine Labouré, a French religious, witnessed several apparitions of Mary that affirmed the doctrine of the Immaculate Conception. These manifestations revealed the design of the Miraculous Medal, which includes the prayer, “O Mary, conceived without sin, pray for us who have recourse to thee.”

Mary’s intercession readies faithful to become “Christians alive with the light and love of the Savior,” said Father Gill, especially amid global “hardship and fears.”

“Only if we cooperate with God’s grace … will we bring more fully to others the news with our lives that Jesus Christ is born for us,” he said. “Here is here! He is among us! He is Emmanuel. On this holy day of Mary, let trust in her prayers to help us on our way to Christmas.”