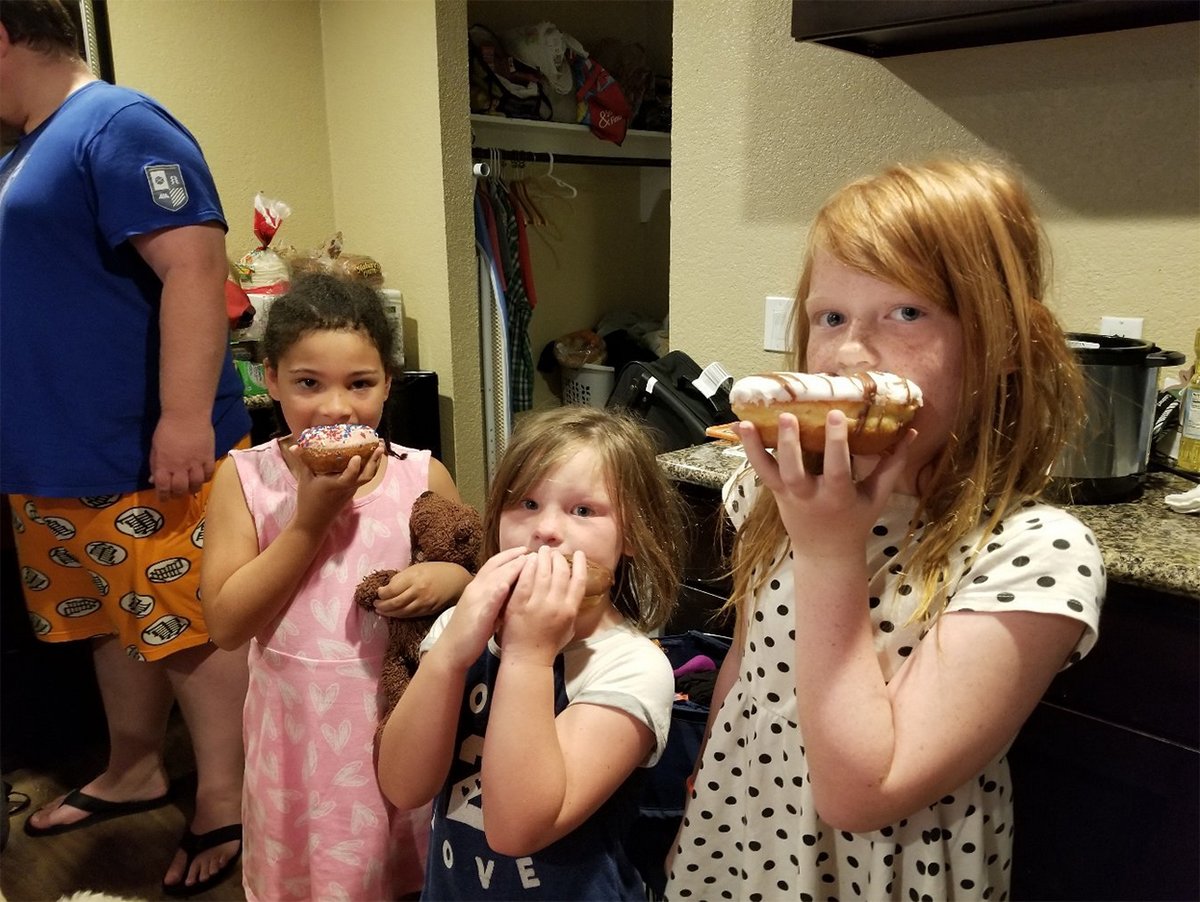 Three of Bianca Simone and Drew Tunnell's six children enjoy a snack in their temporary home after the family was evicted from their apartment in San Diego earlier in 2020. Simone turned to Catholic Charities Diocese of San Diego's food distribution program after losing her job and being unable to find work for months during the coronavirus pandemic. (CNS photo/courtesy Catholic Charities Diocese of San Diego)

CLEVELAND (CNS) — Laid off from her information technology job last Thanksgiving, then evicted for falling behind on the rent two months later and having to keep six children, fed, Bianca Simone needed options.

Even though her boyfriend, Drew Tunnell, still had his job in plumbing sales, the couple faced years-long waiting lists for an apartment. Then the coronavirus pandemic hit.

For eight months they shuttled from place to place, mostly staying in hotels and motels but occasionally in their car. As savings dwindled, the couple struggled to keep the kids fed.

“We felt like we were in a tailspin. We didn’t have any place to stay. The kids are hungry,” Simone, 36, told Catholic News Service Dec. 1.

Simone decided it was time to seek help. She was like millions of people nationwide who had never sought assistance but were struggling economically during the pandemic.

Simone and Tunnell, 38, and their children are not alone in their food insecurity. Nearly 26 million people said they did not have enough food at least some of the time during late October and early November, according to the most recent U.S. Census Bureau Household Pulse Survey.

The number represents a 30% increase in hunger compared with Census Bureau survey data from late February and early March, just before the pandemic hit, when 19.7 million people reported difficulty in obtaining food some or much of the time.

Experts said the number of people with who are hungry is the highest in decades, perhaps since the Great Depression.

Jane Stenson, vice president for food and nutrition and poverty reduction strategies at Catholic Charities USA, said the demand for food is greater than she has ever seen. “We’ve seen bad times regionally, but this is everywhere,” she told Catholic News Service.

Ray Offenheiser, director of the Pulte Institute for Global Development at the University of Notre Dame, said the level of food insecurity has rapidly expanded from poor communities “to your neighbor.”

“People are juggling paying the rent, keeping the car, paying the gas, feeding their children and keeping the lights and heat on in winter, and they have to figure out which among those different things they’re gong to cut back on as they lose their jobs,” Offenheiser said.

In Simone’s case, a social services hotline referred her to Catholic Charities Diocese of San Diego. The agency had expanded its food distribution network from three pantries to 21 distribution sites in San Diego and Imperial counties in southernmost California in response to growing hunger in the early days of the pandemic.

Simone cautiously reached out, hesitant because she did not want to “feel like a number.” What she found, she said, was relief. Instead of showing up to stand in a long line, the agency scheduled an appointment for her to pick up food.

“They do everything that they can to recognize your humanity and respect,” she said. “I respect that a lot.”

Like numerous other families nationwide, Simone and Tunnell received Farmers to Families food boxes as part of the U.S. Department of Agriculture’s Coronavirus Food Assistance Program. By year’s end Farmers to Families is expected to have distributed 123.4 million boxes of fresh produce, meats, dairy and other products.

Vino Pajanor, CEO of Catholic Charities Diocese of San Diego, credited the program for providing much-needed food at a difficult time for families hurting from the fallout caused by the pandemic.

“We have distributed more than 1 million meals since March,” four times the amount of in the same period in 2019, Pajanor said.

Those who have come to the agency’s distribution sites span wide demographics and include many people who never needed assistance before. “When staff and volunteers started hearing the stories, it comes to light that everybody is just one paycheck away from being homeless or hungry,” he told CNS. 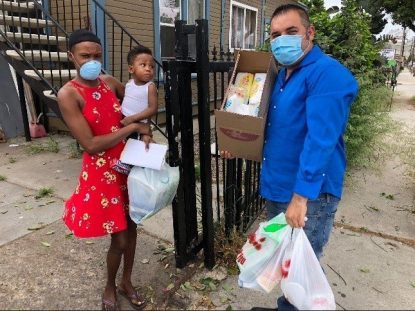 San Diego’s circumstance parallels those across the country. Catholic Charities of Corpus Christi, Texas, reported a 60% increase in people seeking food assistance this year. The Florida Catholic Conference reported that it has distributed 26 million pounds of food at 62 distribution sites since January, an increase of 75% over the previous year.

At Catholic Charities of Buffalo in New York, Eileen Nowak, director of parish outreach and advocacy, shared how one of its pantries illustrates the growing food insecurity confronting people.

She said the agency’s pantry in suburban Lackawanna saw the number of families served spike from 60 to 90 a day before the pandemic to 190 a day in mid-November as the number of coronavirus cases surged.

Nowak said the increase is fueled by new rounds of layoffs.

The agency saw the number of clients decrease during the summer as families used the $1,200 in emergency aid under the CARES Act. Numbers began climbing again by late summer.

The seven pantries operated by Catholic Charities of Corpus Christi have seen a 52% increase in the number of people seeking assistance this year, said Angelina Garcia, senior director of program and grants.

The pandemic has caused oil and natural gas drilling to retrench in rural areas of the diocese, leading industry workers who once had well-paying jobs to seek help, she explained Dec. 1 between runs to deliver food to a pantry in Corpus Christi’s Flour Bluff area.

“We have a mixture of folks who are making a good living and then those who are barely making a living,” Garcia said of the clients. Federal emergency pandemic relief funds have helped people with utility and rent payments as well.

At Our Lady of Guadalupe Parish in Alice, about 45 miles west of Corpus Christi, parishioners and Knights of Columbus members distribute up to 500 Farmers to Families boxes a week.

Garcia expressed concern about the pandemic continuing until the latter half of 2021 because some federal food programs have not been extended. “We are sharing lots of prayer and believing in faith that God’s going to keep providing so we can support the community and the people who are hurting,” she said. 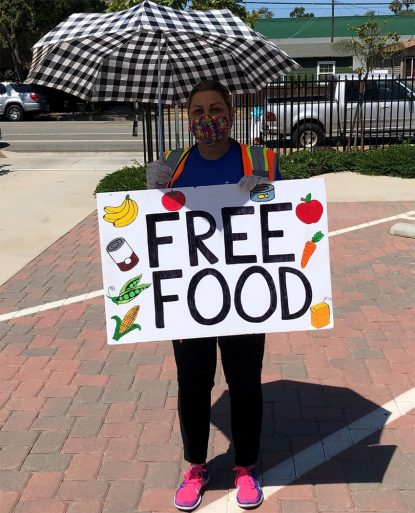 The pandemic pushed Catholic Charities of the Archdiocese of Miami to build a food distribution program. CEO Peter Routsis-Arroyo said delivering food through pantries “has never been a core service” during the agency’s 90-year history, but “with this pandemic we made the conscious decision that we didn’t have a choice.”

“As the people were hurting, it was an obvious need. We’ve got the ability and the resources to be able to do it,” he told CNS.

Statewide in Florida, the emergency response by Catholic entities has expanded beyond food to include face coverings, hand sanitizer and bleach, said Gabe Tischler, emergency management specialist at the Florida Catholic Conference.

He said many distribution sites had opened at parishes since March. He credited Catholic Charities agencies’ experience in mobilizing after devastating hurricanes for being able to ramp up quickly.

A bipartisan group of senators has announced a new $908 billion coronavirus relief bill that would address some of those needs and support state and local governments struggling to aid people who lost jobs because of the pandemic.

As of Dec. 3, no vote on the measure had been scheduled in either the House of Representatives or the Senate.

Notre Dame’s Offenheiser called on Congress to act immediately to stave off massive homeless in the middle of winter. “This is the time the government should be intervening,” he said.

Stenson at Catholic Charities USA urged people with dwindling funds to pay for rent, utilities, health care and other basic needs and to go out to seek food assistance because the networks that local agencies have established since March remain intact.

“If that helps you stay housed, then by all means seek assistance,” she said. “Keep your house together.”

Meanwhile, Simone plans to continue visiting the Catholic Charities pantry in San Diego even though she recently landed two part-time jobs, working a total of 55 hours a week. She earns $13 an hour, the minimum wage in California.

As for housing, the couple and their kids, ages 6 to 15, have settled in an extended stay hotel. One room costs $450 a week. When Tunnell’s children return from their time with their mother, the cost jumps another $250 a week. “That doesn’t even include the cost of having things in storage for $200 a month,” Simone said.

The income from the new jobs will allow for shopping at a grocery store to buy a special item or two from time to time, Simone said.

“We can afford something fancy like everyone’s favorite flavor of ramen or a sour dough bread for Drew. Being able to have a little bit of that flexibility is a big help.” 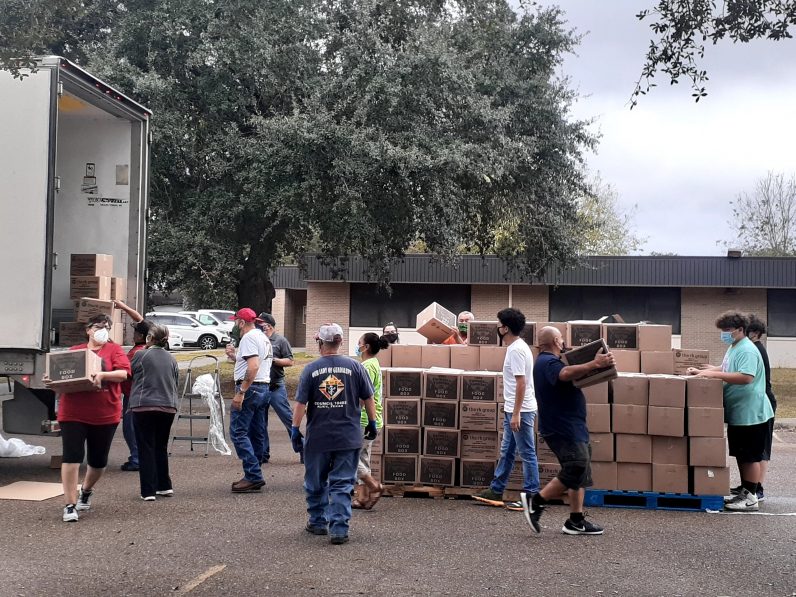