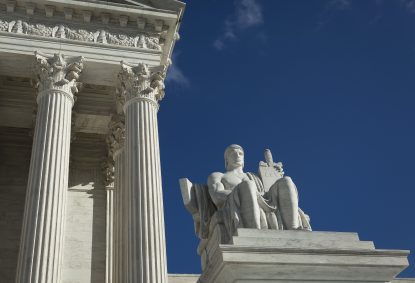 WASHINGTON (CNS) — The Supreme Court Dec. 17 rejected an appeal from a Kentucky Christian school to be exempt from state orders to stop in-person classes amid rising coronavirus cases.

The justices’ decision focused more on timing, saying the pandemic restrictions were expiring in the new year and most of the state’s schools were about to close for the winter holidays.

Officials from Danville Christian Academy, near Lexington, and Kentucky Attorney General Daniel Cameron challenged the mid-November order by the state’s Democratic governor, Andy Beshear, to stop all in-person classes in the state through the end of the year.

The justices’ unsigned opinion said: “The governor’s school-closing order effectively expires this week or shortly thereafter, and there is no indication that it will be renewed.” They also noted that if the governor issues another order in the new year, the school could return to the court to seek relief from new restrictions.

Alito, joined by Gorsuch, said the court should have responded sooner to address the challenge to this order.

“As things now stand, this action remains on the docket of the district court,” the unsigned opinion said. “If the governor does not allow classes to begin after the turn of the year, the applicants can file a new request for a preliminary injunction, and if the lower courts do not provide relief, the applicants may of course return to this court.”

The U.S. Court of Appeals for the 6th Circuit reversed that decision, saying the appeal was not likely to win because the governor’s order was neutral and applied to public and private schools.

Beshear urged the court to leave the order in place noting the state’s current “deadly third wave” of the coronavirus. He stressed that the school and attorney general had not presented “expert testimony, scientific studies, or public health testimony” to support their argument of limited public health risks with in-person schooling.

“Nobody — not an election official, not a public health expert, and not a court — should make life-or-death public policy decisions on the basis of such purely anecdotal, unscientific and faulty reasoning about the spread of COVID-19,” he said.

First Liberty Institute, the law firm representing the school, said in a Dec. 17 statement that they would return to court immediately if the governor imposes a new school-closing order and stressed that the First Amendment protects religious education just as it protects worship.

St. Michael Academy in Petoskey, Michigan — described on its website as a classical Catholic high school — similarly filed suit in December against the state’s temporary ban on in-person high school classes. The ban, issued by the Michigan Department of Health and Human Services, is in effect through Dec. 20 because of the pandemic.

School officials have argued they should be allowed to have in-person learning at their 30-student school. They said the order violates the First Amendment and the risk of COVID-19 spreading at the school is low because of the area’s low infection rate and the school’s safety protocols.

Richard Thompson, president of Thomas More Law Center, which is representing the school, said in the lawsuit that “harm caused by children being kept away from school is far greater than the chance of that child ever coming down with COVID-19.”

He also argued the school recognizes the state may have the right to take action to slow the spread of coronavirus but that it doesn’t make sense to close a small school in an area with limited cases.

PREVIOUS: Sisters, volunteers see no end to need for food amid pandemic

NEXT: Genocide in Nigeria ‘happening before our eyes,’ congressman says at hearing