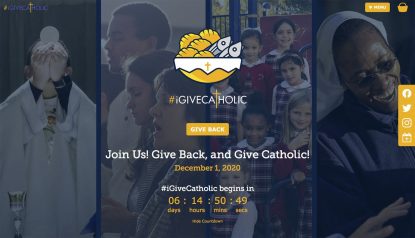 This is a screen grab of the website #iGiveCatholic, https://www.igivecatholic.org. (CNS photo/screen grab)

“We are overwhelmed by the generosity of so many people across this country and throughout the world,” Howat said in a statement Dec. 10.

“These gifts will be used to meet the spiritual, physical and educational needs that exist every year but are especially acute during this time of global suffering,” he said. “We are extremely grateful to Our Sunday Visitor, our national sponsor, for their support and belief in what can be accomplished for the church through #iGiveCatholic.”

Donations also came from people in 12 other countries in support of these U.S. Catholic organizations. In 2019, #iGiveCatholic raised $7.4 million from approximately 23,000 donors.

The 24-hour fundraiser #iGiveCatholic takes place the same day as an annual global fundraiser called Giving Tuesday, held the Tuesday after Thanksgiving. Next year’s Giving Day is set for #GivingTuesday on Nov. 30.

Giving Tuesday is a movement that initially was started in 2012 by the 92nd Street Y, a community center on the Upper East Side of Manhattan, and the United Nations Foundation, as a response to the consumerism organizers felt is represented by the post-Thanksgiving shopping days known as Black Friday and Cyber Monday.

This year’s #iGiveCatholic Giving Day had extra urgency because the ongoing COVID-19 pandemic has hit the economy hard, leaving people unemployed and many unable to pay rent and even buy food, so Catholic institutions are trying to address an overwhelming need across the United States.

According to #iGiveCatholic officials, more dioceses and ministries, large and small, participated this year than in any previous year “and were gratified by the experience — and the results.”

In the Diocese of Fort Wayne-South Bend, Indiana, Our Lady School with its 99 students participated for the first time this year hoping to raise funds for much-needed technology upgrades.

“When we thought about participating in the past, it always seemed so overwhelming,” said school principal Beatrice Royal. “But our school and parish community pulled together to make it work.

“When you can articulate what you need, do not be afraid to ask for it and turn the outcome over to God. We followed this method and our results were amazing.”

Mercedez Rassi, director of stewardship and development for the Diocese of San Angelo, Texas, which is a mission diocese, said the funds raised this year through #iGiveCatholic will be especially helpful to a community that has been devastated by the oil crash resulting, in part, from the pandemic.

“Last year, we raised $2,200, and this year we received $145,000,” Rassi said. “We are so grateful for the generous response from our donors.” Gifts to Catholic Charities of Odessa, Texas, accounted for nearly $55,000 of the diocese’s total.

“The demand for our food assistance program increased dramatically throughout the year because of the pandemic,” said the agency’s executive director, Sara Aguilar. “Funds we received through #iGiveCatholic will go a long way toward ensuring that Catholic Charities can continue to meet this basic need for so many in our community.”

In the Archdiocese of Washington, Joseph Gillmer, executive director of development, said the archdiocese nearly tripled its overall fundraising through #IGiveCatholic this year.

“One of our most notable success stories comes from the Kidane-Mehret Ethiopian Catholic community, which raised $40,000 this year, after garnering only $1,000 in 2019, in hopes of building a church,” Gillmer said. “Most of their gifts were small-dollar donations. It’s amazing what can be achieved when you’re not ashamed to ask people to support a cause that you — and they — believe in.”

The #iGiveCatholic website, www.igivecatholic.org, has the full list of results — sortable by archdiocese/diocese, organization, total gifts or total dollars.

The annual 24-hour #iGiveCatholic online giving platform was launched in 2015 by the Catholic Community Foundation of the Archdiocese of New Orleans.

On March 26 of this year, its bishop-led board activated its national website to accept donations from individuals and businesses in support of parishes, schools and ministries of dozens of dioceses across the country.

In March, Howat said the site would be “activated indefinitely” to address the financial crisis the pandemic has caused for Catholic entities.