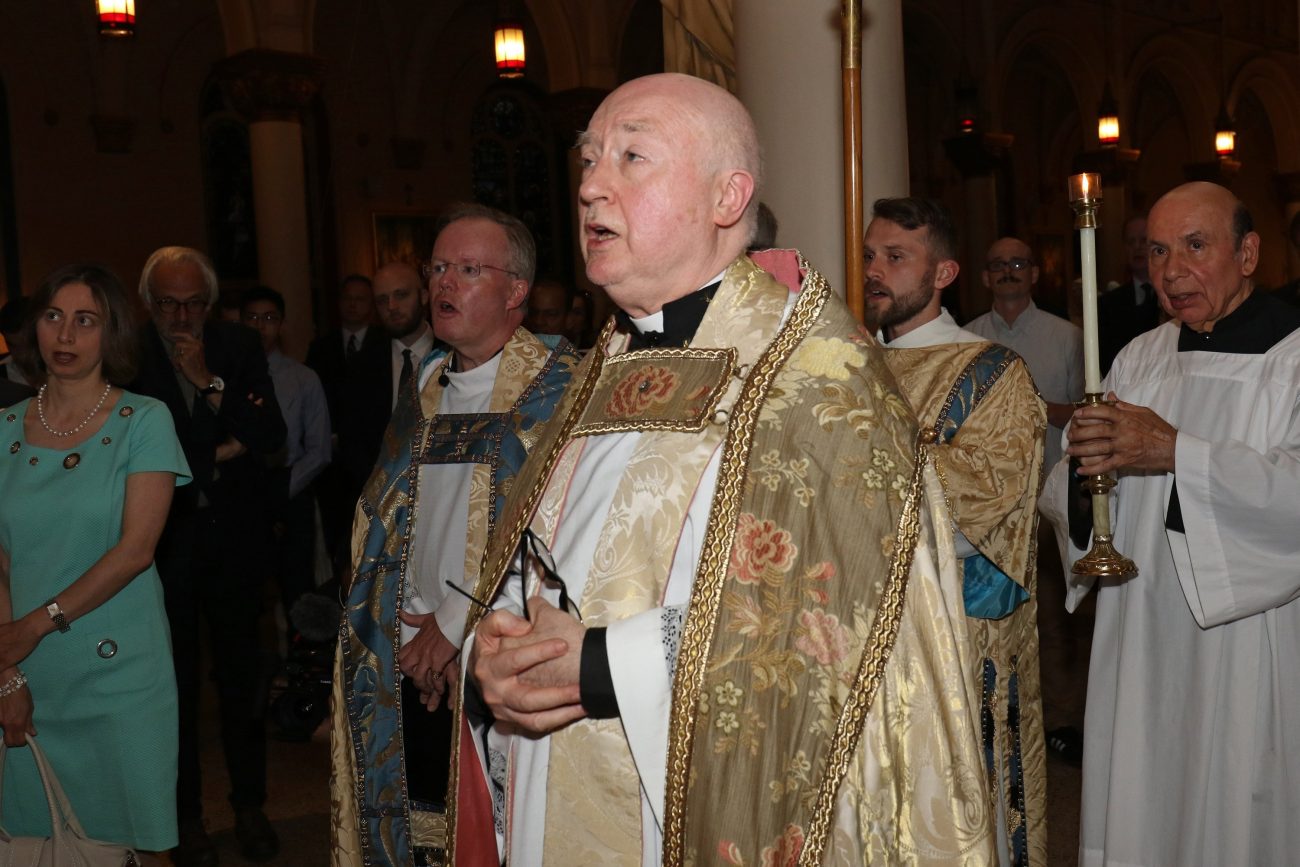 Father George Rutler, pastor of St. Michael the Archangel Church in New York City, sings the Marian hymn "Salve Regina" June 12, 2018, during a dedication and blessing of a shrine established for persecuted Christians in the Middle East. (CNS photo/Gregory A. Shemitz)

NEW YORK (CNS) — Father George W. Rutler has stepped aside from his duties as pastor of St. Michael the Archangel Parish in Manhattan after a security guard at the church alleged he sexually assaulted her in his office.

The criminal complaint, under investigation by the Manhattan district attorney’s office, accuses Father Rutler of watching pornography in the guard’s presence.

The incident reportedly took place in Father Rutler’s office in the overnight hours of Nov. 4. The priest allegedly attacked the security guard, Ashley Gonzalez, 22, physically and sexually when she attempted to leave the room.

According to a report in The New York Times Dec. 5, the Manhattan District Attorney’s Office said in a statement that its investigation was “active and ongoing.”

Father Rutler, in a letter addressed to St. Michael’s parishioners Nov. 20, denied the “allegation,” which he called “incoherent and inconsistent with how I have conducted myself in 50 years of ministerial service.”

Joseph Zwilling, a spokesman for the New York Archdiocese, said the archdiocese was cooperating with the district attorney’s investigation and planned to conduct its own inquiry after prosecutors concluded theirs.

Zwilling said that Father Rutler, after discussing the matter with the archdiocesan officials, “voluntarily stepped away from his duties as pastor for the good of the parish and the archdiocese,” and is not serving as a priest.

Along with his longtime service as a priest of the archdiocese, including as pastor of St. Michael’s since 2013, Father Rutler has hosted a show on Eternal Word Television Network for more than 30 years and is a noted author. The network has suspended his programming during the investigation.

Redemptorist Father Robert Pagliari has been assigned as temporary administrator of St. Michael’s, according to a listing on the parish’s website and confirmed by the archdiocese.

Catholic New York is the newspaper of the Archdiocese of New York.

PREVIOUS: How does a hymn’s doctrine sound?

NEXT: California priest wins in court fight against pandemic limits on churches