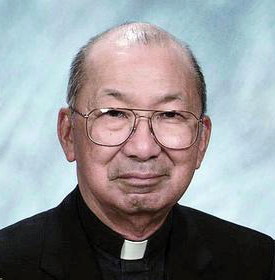 A member of what has been accurately called “The Greatest Generation” he was born in Philadelphia, the son of the late Jung Sang Kee and the late Moya Wong. He attended Lewis Elkin School and Northeast Catholic High School and survived the Great Depression before entering the United States Army.

As a young soldier in Europe, he volunteered for a dangerous journey from India to China on the old Burma Road to drive trucks and deliver supplies to the Chinese who were at that time allied with the West in the fight against Japan.

This may have been a beginning of his life-long love of automobiles, and he only surrendered his drivers with reluctance about a year ago.

Back in civilian life Father Jung entered St. Charles Borromeo Seminary and was ordained a priest by Archbishop John F. O’Hara at Immaculate Conception Church on May 10, 1956.

In 1996 he was appointed senior priest at St. Agnes, West Chester where he served until his retirement in 1998.

He is survived by his sister, Anna, and a niece.