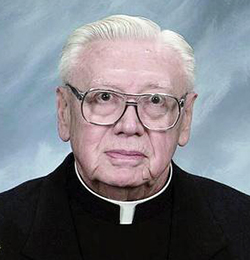 He also attended the Pontifical Gregorian University in Rome where he obtained a licentiate in theology and a doctorate in church history.

He was ordained in Rome on Dec. 17, 1955 by Archbishop Martin J. O’Connor, rector of the North American College.

His first assignment upon his return to Philadelphia was as parochial vicar at St. Gabriel Parish, Norwood, followed by St. John the Baptist, Philadelphia, and faculty of St. Charles Borromeo Seminary where he rose to the position of vice rector.

In 1976 he was editor of a well-received “History of the Archdiocese of Philadelphia” in which he wrote the section on the Cardinal Krol administration. He also wrote a history of St. Charles Borromeo Seminary.

In 1985 he was appointed pastor of Stella Maris Parish in South Philadelphia and pastor emeritus in 2008.

“I was principal of the school the whole time he was here,” said St. Joseph Sister Lawrence Elizabeth. “He loved the school and would come every day. He would ask the children, ‘Who can spell spaghetti?’ or ‘Who can spell monsignor?’ He would say to a little one, ‘You can be my bodyguard today.’”

Msgr. Charles Sangermano remembers Msgr. Connelly as a faculty member at St. Charles during his own seminary days.

“He preached at my first Mass and he preached at my Silver Jubilee,” said Msgr. Sangermano, who will return the favor by preaching at Msgr. Connelly’s funeral Mass. “He was my seminary professor and he had great charm, great ability and great humility. With all his intellectual background he was a wonderful pastor and his people loved him. He never held himself aloof. He used his charm for the good.”

A viewing for Msgr. Connelly will be held Thursday, Dec. 10 at 9 a.m. at Stella Maris Church, with the funeral Mass celebrated by Archbishop Nelson J. Pérez following at 10:30.

Msgr. Connelly is survived by cousins and many friends.