In a statement Dec. 14, the Venezuelan bishops’ conference said that remarks from authorities in Venezuela and Trinidad trying to criminalize humanitarian organizations helping refugees were “unacceptable and inadmissible.”

“Far from accepting their responsibility and adopting the necessary measures” to ensure no such tragedy occurs again and that the human rights of migrants is protected, the bishops said the authorities were trying to blame international agencies and the humanitarian helping Venezuelan migrants, “which is a particularly vulnerable group with respect to its human rights and humanitarian situation.”

Venezuela has been in a severe economic spiral since 2014, and millions of people have fled the country. The BBC reported that about 20 migrants boarded a makeshift boat Dec. 6 hoping to seek asylum in Trinidad and Tobago.

Venezuelan coast guards patrolling the seas discovered 11 bodies off the coast of Guiria Dec. 12. Three more bodies were discovered the following day while the search continued for the others.

According to the U.N. International Organization for Migration, an estimated 5.4 million refugees have fled Venezuela; roughly 16,000 were registered in Trinidad and Tobago.

“The number of Venezuelans leaving their country has increased in recent weeks as lockdown measures across the region ease. With land and maritime borders still closed, these movements take place mainly through informal routes, exposing refugees and migrants to extreme dangers. These irregular border crossings have significantly heightened health and protection risks,” the IOM said in a statement Dec. 15.

Despite the Venezuelan bishops’ assertion that Trinidad and Tobago violated established human rights norms by denying the entry of refugees, authorities in the island nation claimed their coast guard had not intercepted any boats.

The bishops also denounced the conditions that led the migrants to flee Venezuela: “severe impoverishment, hunger, deteriorating quality of life, total collapse of public services and institutionalized violence for which they are easy prey for human trafficking mafias.”

The Venezuelan bishops’ conference reiterated the Catholic Church’s commitment to protect human dignity and told government authorities and the international community that “this type of event must not be forgotten or made into another figure in statistics and reports.”

“We stand in solidarity with their families, praying that the good Lord in his infinite mercy will console the cry of those afflicted by this tragedy and grant eternal rest to the dead,” the bishops said. 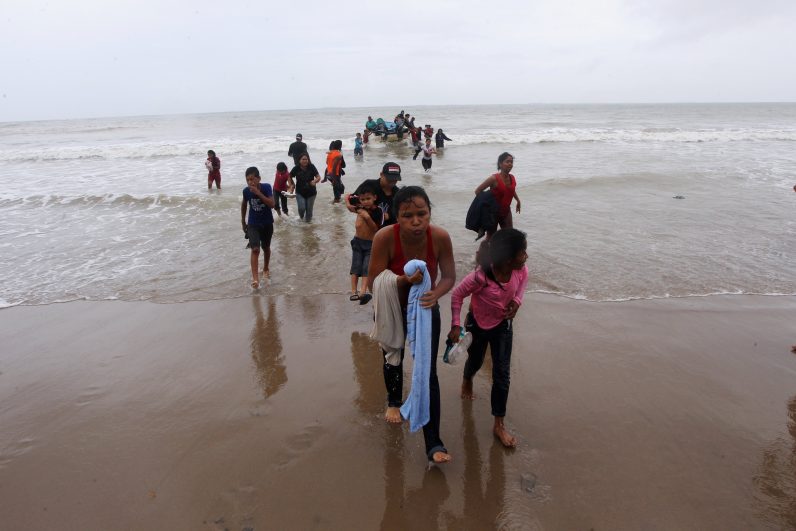 Venezuelan migrants arrive on shore at Los Iros Beach after their return to the island in Erin, Trinidad and Tobago, Nov. 24, 2020. After a different boat carrying refugees was allegedly denied entry into Trinidad and Tobago and subsequently shipwrecked, Venezuelan bishops said the treatment of migrants fleeing the country constitutes serious human rights violations. (CNS photo/Lincoln Holder, Newsday handout via Reuters)

NEXT: In predominantly Christian Uganda, some still fear attacks