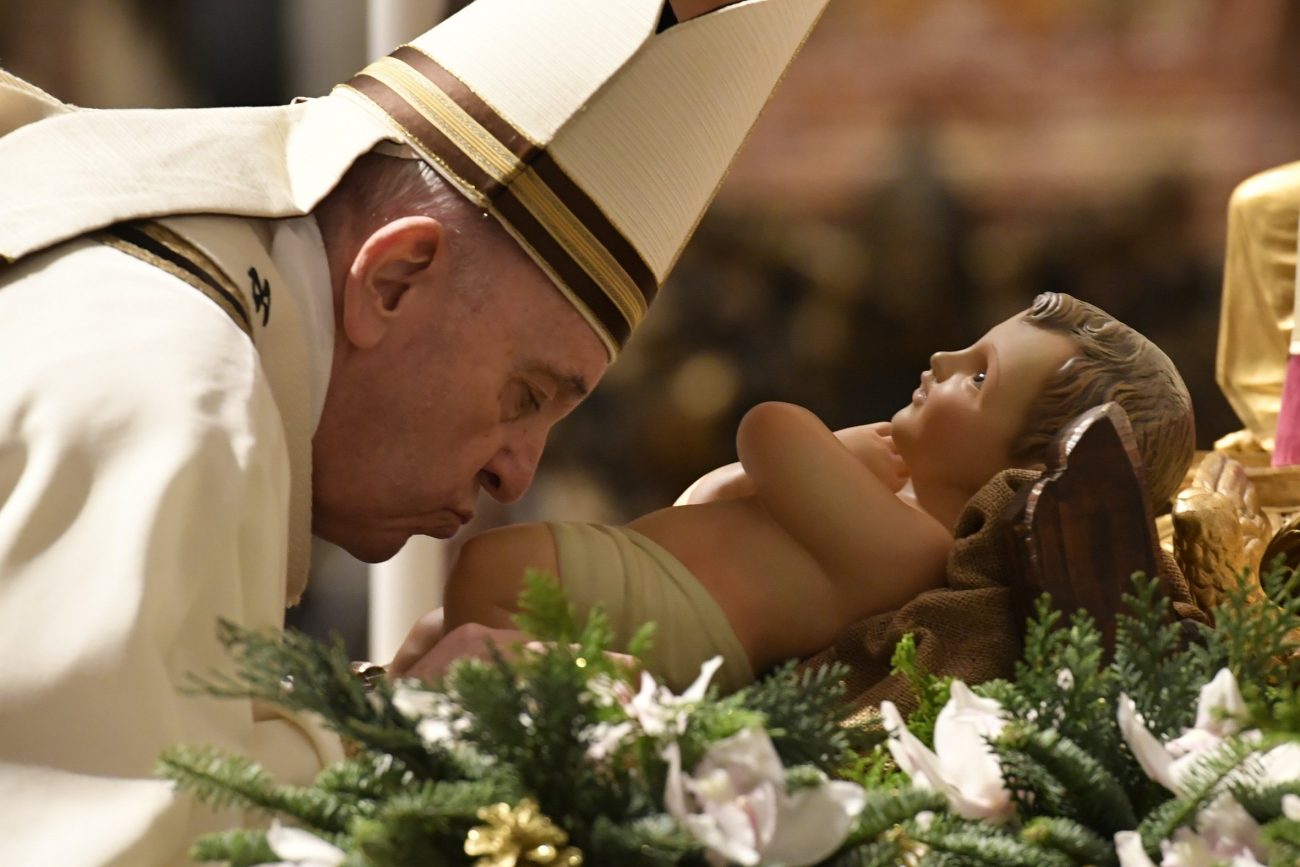 Pope Francis kisses a figurine of the baby Jesus as he celebrates Christmas Eve Mass in St. Peter's Basilica at the Vatican Dec. 24, 2020. The Mass was not open to the general public and began at 7:30 p.m. local time so that the limited number of attendees could return home in time to observe Italy's 10 p.m. curfew. (CNS photo/Vatican Media)

The birth of Christ is a gift from God that brings people hope and courage in troubled times, Pope Francis said Christmas Eve.

“Underlying all our strengths and weaknesses, stronger than all our past hurts and failures or our fears and concerns about the future, there is this great truth,” the pope said in his homily Dec. 24 as he celebrated the nighttime liturgy.

“We are beloved sons and daughters. God’s love for us does not, and never will, depend upon us. It is completely free love, pure grace,” he said.

The nighttime Mass, which is often referred to as “midnight Mass” has not been celebrated at midnight at the Vatican since 2009. However, the traditional Christmas liturgy began much earlier than past years — at 7:30 p.m. local time — so that those invited to attend could get home in time to observe Italy’s 10 p.m. curfew.

Much like the liturgies during the Easter season, the pope celebrated a pared-down Christmas Mass at the Altar of the Chair in the back of the basilica. Some 200 people, including bishops and cardinals concelebrating, were present, all donning masks and observing social distancing regulations.

The Mass began with the Christmas proclamation of Jesus’ birth, known as the “kalenda.” The pope then lifted a cloth, revealing a life-sized statue of the baby Jesus, which he reverently kissed and blessed with incense.

Despite the more subdued Christmas Mass, the ornate bouquets of poinsettias adorning the Altar of the Chair, along with the sound of sacred music and the bells of St. Peter’s ringing during the “Glory to God” brought an air of joyful celebration in uncertain times. 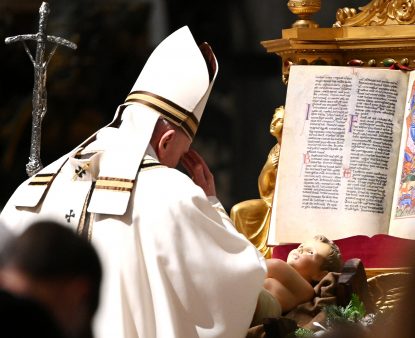 Pope Francis prays in front of a figurine of the baby Jesus during the Mass on Christmas Eve in St. Peter’s Basilica at the Vatican Dec. 24, 2020. The Mass was not open to the general public and began at 7:30 p.m. local time so that the limited number of attendees could return home in time to observe Italy’s 10 p.m. curfew. (CNS photo/Vincenzo Pinto, Reuters pool)

In his homily, the pope said  Christ’s coming is like the birth of a child which is such a joyous and exciting occasion that it “makes us think nothing of weariness, discomfort and sleepless nights.”

“That is what Christmas is: the birth of Jesus is the ‘newness’ that enables us to be reborn each year and to find, in him, the strength needed to face every trial,” he said.

Reflecting on the day’s readings, the pope noted that those who proclaim the birth of the Savior often use the phrase “for us.” For Christians, he said, those words mean “that the Son of God, the one who is holy by nature, came to make us, as God’s children, holy by grace.”

“Yes, God came into the world as a child to make us children of God,” the pope said. “What a magnificent gift! This day, God amazes us and says to each of us: ‘You are amazing.'”

Despite this great gift, he continued, at times humanity’s injustice toward those less fortunate may give rise to doubts whether God was “right in giving us so much.” Nevertheless, the Lord does this knowing people’s limitations “because he is madly in love with us.”

“This is his secret for entering our hearts,” the pope said. “God knows that we become better only by accepting his unfailing love, an unchanging love that changes us. Only the love of Jesus can transform our life, heal our deepest hurts and set us free from the vicious circles of disappointment, anger and constant complaint.” 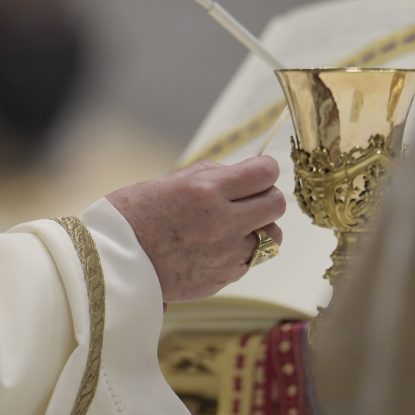 Pope Francis holds the Eucharist as he celebrates Christmas Eve Mass in St. Peter’s Basilica at the Vatican Dec. 24, 2020. The Mass was not open to the general public and began at 7:30 p.m. local time so that the limited number of attendees could return home in time to observe Italy’s 10 p.m. curfew. (CNS photo/Vatican Media)

Recalling the night of Jesus’ birth in “the lowly manger of a darkened stable,” Pope Francis questioned why the “greatest of kings” was born “without decent accommodation, in poverty and rejection.”

God, he answered, “loves to work wonders through our poverty” and placed “the whole of our salvation in the manger of a stable.”

“The Son of God was born an outcast, in order to tell us that every outcast is a child of God,” he said. “He came into the world as each child comes into the world, weak and vulnerable, so that we can learn to accept our weaknesses with tender love.”

Continuing his homily, the pope also reflected on Christ’s birthplace and noted that the meaning of the city’s name, “Bethlehem” — which means “house of bread” in Hebrew — serves as a reminder of humanity’s need for God “like the bread we eat.”

“How often instead, in our hunger for entertainment, success and worldly pleasures, do we nourish life with food that does not satisfy and leaves us empty within!” he exclaimed.

“It is true; in our endless desire for possessions, we run after any number of mangers filled with ephemeral things, and forget the manger of Bethlehem,” the pope said. “That manger, poor in everything yet rich in love, teaches that true nourishment in life comes from letting ourselves be loved by God and loving others in turn.”

Pope Francis said that in choosing to come into the world as a vulnerable child, God wanted to encourage men and women to “care for others” and comfort the “tears of the suffering.”

“God came among us in poverty and need, to tell us that in serving the poor, we will show our love for him,” the pope said. 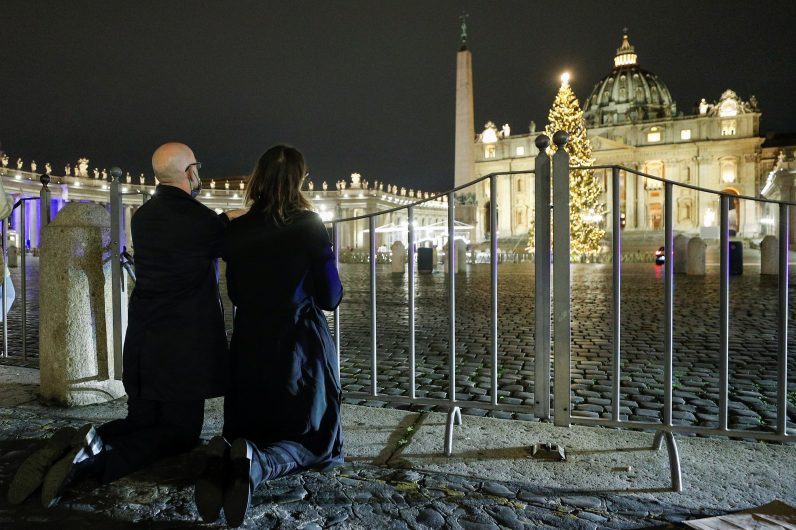 People pray outside St. Peter’s Square during the Christmas Eve Mass celebrated by Pope Francis at the Vatican Dec. 24, 2020. The Mass was not open to the general public and began at 7:30 p.m. local time so that the limited number of attendees could return home in time to observe Italy’s 10 p.m. curfew. (CNS photo/Guglielmo Mangiapane, Reuters)

PREVIOUS: Pope on Christmas: Share hope, promote peace, give vaccine to all