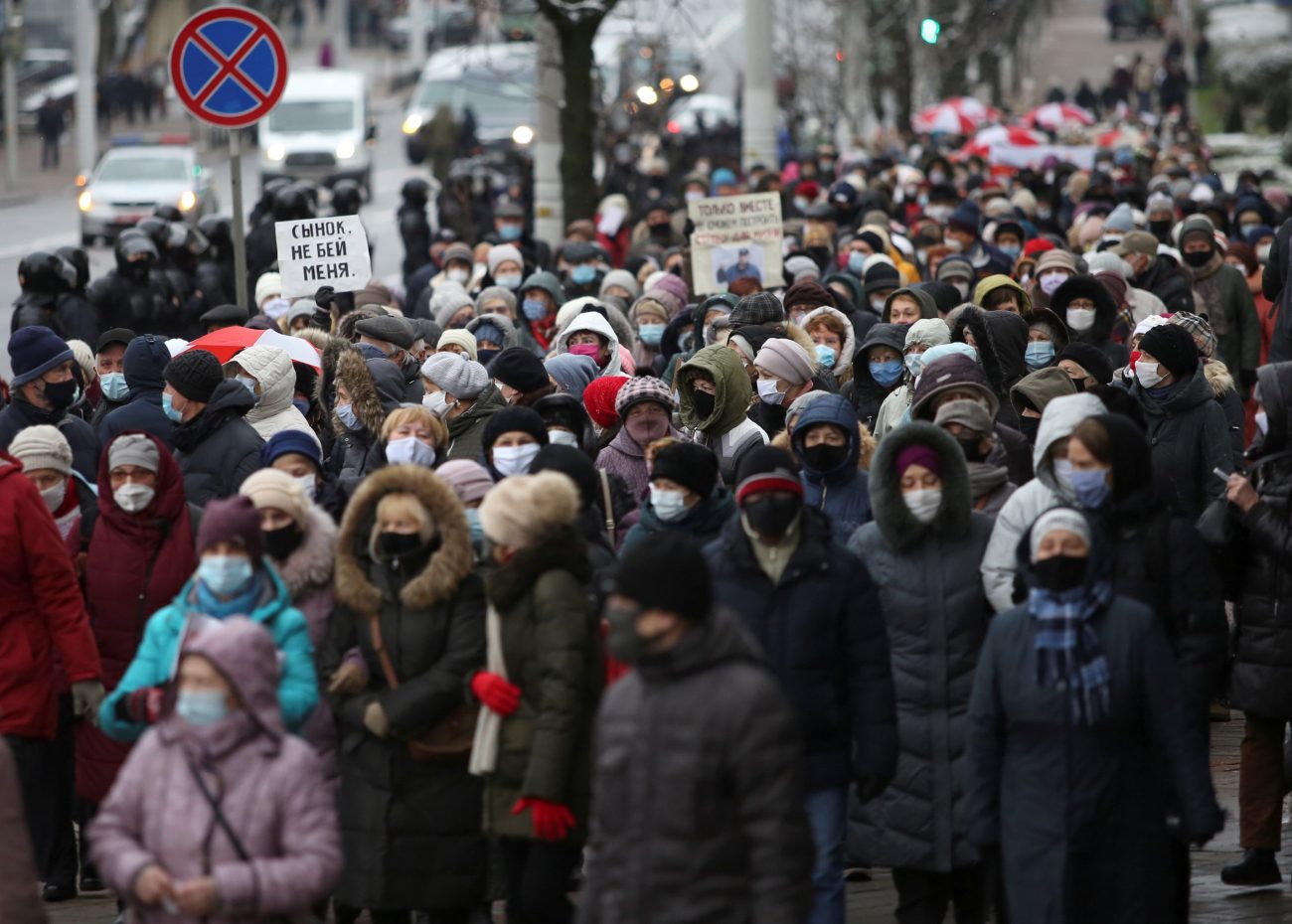 People take part in an opposition rally to demand the resignation of Belarusian President Alexander Lukashenko and to protest police violence in Minsk, Belarus, Nov. 30, 2020. The Catholic bishops in Belarus said the country's "unprecedented socio-political crisis" was worsening four months after the disputed reelection of Lukashenko. (CNS photo/Reuters)

(CNS) — Catholic bishops warned of a “deepening crisis” in Belarus as people continue to protest and strike against government crackdowns since disputed elections in August.

“The violence is not stopping, the bloodshed continues, society remains riven. This does not foretell a happy future — for as Christ said, a house divided against itself cannot stand,” said the bishops’ conference, based in Minsk.

The message was published as security forces, using tear gas and stun grenades, arrested more than 300 protesters during Nov. 29 demonstrations across Belarus, and two Catholic priests were detained by police. Archbishop Tadeusz Kondrusiewicz of Minsk, president of the bishops’ conference, remains barred from entering the country.

“It is hard to believe this is happening in our peace-loving land, known for tolerance and harmony between people of different faiths and nationalities,” the bishops said in a pastoral letter.

The Poland-based Belsat news agency named the arrested priests as Father Vitaly Bystrou of Brest, who was detained for 10 days for participating in an “unauthorized event,” and Father Vyacheslav Barok from Rossony, who was summoned for comments on his YouTube channel.

In a Dec. 1 statement, the curia of the Belarusian Greek Catholic Church described Father Bystrov’s 10-day detention as “absurd,” adding he had denied participating in a “mass action.” The curia said it was alarmed his home parish at Ivatsevichi had received an official warning about his activities, “which signals the introduction of collective responsibility.”

Father Barok told Belsat Nov. 30 that investigators had also questioned parishioners about his “moral assessment of events in Belarus.”

“They wish to shut the mouths of preachers, but don’t know how to do this,” the priest added. He said no matter what authorities do, “things only get worse for them, so the only right way is to announce new elections and make them transparent.”

In the disputed Aug. 9 election, President Alexander Lukashenko, in power since 1994, was declared victor with over 80% of votes, triggering allegations of fraud. Opposition leaders ended up leaving the country.

The bishops called on “Catholics and all people of goodwill to continue offering prayers for a speedy and peaceful solution — blessed are the peacemakers and those who seek justice.”

“The Catholic Church, guided by the Gospel and the social doctrine built upon it, opposes and condemns violence, lawlessness, injustice and untruth. It calls for dialogue in the spirit of love for God and neighbor, in observance of divine and human laws.”

In mid-November, the Belarusian government issued a written warning to Minsk Auxiliary Bishop Yury Kasabutski, who is running the archdiocese during the forced exile of Archbishop Kondrusiewicz.

In a Nov. 24 social media post, Bishop Kasabutski warned criminal charges were being drafted against him over recent public statements, while preparations were also underway to arrest other Catholic priests.

In a separate Advent pastoral, read in parishes Nov. 29, Archbishop Kondrusiewicz compared the “unprecedented crisis” in Belarus to the 1912 Titanic disaster, which he said had sunk after its captain and crew ignored safety warnings.

He told his church’s news website Nov. 23 he could “barely hold back tears” when celebrating Mass at the Lithuanian capital’s Ausros Vartai sanctuary, adding he was still unclear why he was being prevented from returning home.