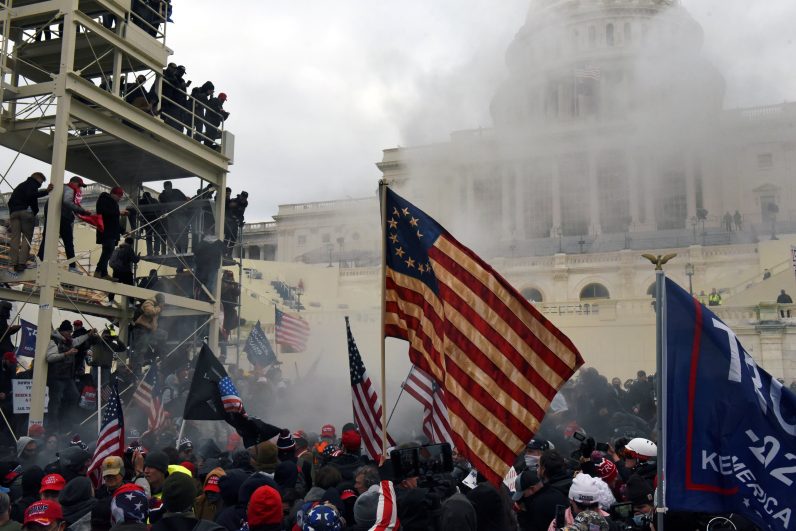 WASHINGTON (CNS) — Supporters of outgoing President Donald Trump breached the U.S. Capitol Jan. 6, putting the building on lockdown and interrupting the count of electoral votes to certify the 2020 election, capping the last days of a tumultuous presidency with chaos.

Much of the country and the world watched aghast at scenes coming out of the nation’s capital after Vice President Mike Pence said he had no authority to change the results of the election, affirming President-elect Joe Biden as the next commander-in-chief.

Lawmakers, including the vice president, were rushed to safety Wednesday afternoon after the angry mob broke into the building. Images on Twitter showed them breaking down doors and some asking the whereabouts of the vice president, who was said to have defied Trump by refusing to block Congress from certifying the results.

With “Trump 2020” flags, they freely roamed the halls of the capitol as scared lawmakers crowded together to pray, some reported.

News reports also said explosive devices were found at the national offices for the Republican and Democratic parties. A woman shot inside the Capitol during the melee later died at a hospital. A second woman and two men died from what Metropolitan Police Dept. Chief Robert Contee called “medical emergencies,” without specifying their nature.”

A Capitol Police officer died Jan. 7, as a result of injuries sustained on duty Jan. 6, bringing the total number of deaths to five people.

“It is my considered judgment that my oath to support and defend the Constitution constrains me from claiming unilateral authority to determine which electoral votes should be counted and which should not,” Pence wrote lawmakers in a letter just before a joint session of Congress to tally the Electoral College count, raising Trump’s ire.

Pence ended the letter with “so help me God.” 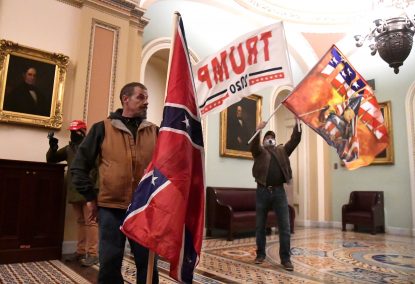 Supporters of President Donald Trump demonstrate on the second floor of the U.S. Capitol building in Washington near the entrance to the Senate after breaching security defenses Jan. 6, 2021. (CNS photo/Mike Theiler, Reuters)

Hours earlier, Trump had publicly urged Pence via Twitter to refute congressional certification of the results, even though Biden won the popular as well as the electoral vote.

“States want to correct their votes, which they now know were based on irregularities and fraud, plus corrupt process never received legislative approval,” Trump tweeted, prompting Twitter to flag the tweet as a claim about election fraud that “is disputed.”

“All Mike Pence has to do is send them back to the States, AND WE WIN. Do it Mike, this is a time for extreme courage!” the president continued.

After Pence refused, the president attacked him on Twitter.

“Mike Pence didn’t have the courage to do what should have been done to protect our Country and our Constitution, giving States a chance to certify a corrected set of facts, not the fraudulent or inaccurate ones which they were asked to previously certify,” Trump wrote.

Archbishop José H. Gomez of Los Angeles, president of the U.S. Conference of Catholic Bishops, issued a statement the evening of Jan. 6 saying he joined “people of good will in condemning the violence today at the United States Capitol.”

“This is not who we are as Americans,” he said, adding that he is praying for members of Congress, Capitol Hill staff members, police officers “and all those working to restore order and public safety.”

The archbishop called the peaceful transition of power “one of the hallmarks of this great nation” and stressed that in this “troubling moment, we must recommit ourselves to the values and principles of our democracy and come together as one nation under God.”

Some Catholics on Twitter in Washington, such as Dawn Eden Goldstein, urged prayers for peace.

“It’s now 3 p.m. in DC. Please join me in praying the Divine Mercy chaplet RIGHT NOW for peace in the US Capitol and the world. I live on Capitol Hill and the sirens are screeching,” she wrote.

“A national disgrace and the inevitable result of the endless lies about the election spread by @realDonaldTrump and his supporters,” tweeted Jesuit Father Jim Martin. “Here we see the fruit of these lies, these sins: anger, hatred, discord, despair and violence. ‘And by their fruits you will know them’ (Mt. 7:20).”

Utah Republican Sen. Mitt Romney told a reporter for The New York Times who was seeking safety along with lawmakers: “This is what the president has caused today, this insurrection.”

Many criticized those who had taken part in the chaos while also carrying “Jesus saves” flags mixed in with Trump paraphernalia.

Biden, in a news conference hours after the chaos began, told Trump to go on national television, fulfill his oath “and defend the Constitution and demand an end to this siege.”

“Think what our children watching television are thinking. Think about the rest of the world is looking at,” he said.

From England, Archbishop Justin Welby of Canterbury said there were “many lessons to be learned from the scenes in Washington.”

“For the moment let us pray for the USA, the world’s greatest defender of democracy until now, as it faces this huge shock. May God bless America with peace and reconciliation,” he tweeted.

Bishop Thomas J. Tobin of Rhode Island said he would be celebrating Mass “for our troubled nation.”

“In this holy season, as we continue to observe the birth of the Christ Child, may peace, harmony, unity and fraternity be restored in our country. May God bless and guide America!,” he wrote.

From Dallas, Bishop Edward J. Burns, tweeted: “Let us pray that this one nation, under God, will always follow the paths of peace and justice.”

Later in the afternoon, Trump released a video continuing to wrongfully and repeatedly insist he had won the election. Claiming fraud, he seemed to address supporters who had caused the chaos and told them to “go home.”

Baltimore Archbishop William E. Lori released a statement later in the day saying that “our hearts are heavy as we witness the shocking and unlawful protests occurring in our nation’s capital.”

“We fervently pray for peace and for God’s protection over our country, our lawmakers, and all those in harm’s way this terrible day. May peace-loving Americans of good will throughout the United States come together to engender peace, reconciliation and healing in our wounded and broken nation, which remains and must always be one, under God,” he said.

Other Catholic bishops and leaders of Catholic organizations joined in separate statements denouncing what took place at the Capitol.

The Maryknoll Office for Global Concerns said it was appalled by the actions of a “violent mob” and called on Trump and elected officials to “condemn the disgraceful behavior witnessed today at the Capitol and to leave behind the hateful rhetoric, false claims and failures in leadership that have led to it.”

In the hours after the initial chaos unfolded, the Biden transition team gathered religious leaders from around the country to pray for healing in a Zoom call. The prayers offered by leaders and those joining in on the chat called for peace and justice and for a renewed strength in the midst of this dark time.

Similarly, the Diocese of Syracuse, New York, livestreamed a Holy Hour of prayer for the nation. Syracuse Bishop Douglas J. Lucia, said in a tweet announcing the prayer service that he believed “prayer for peace and unity is imperative at this time.” 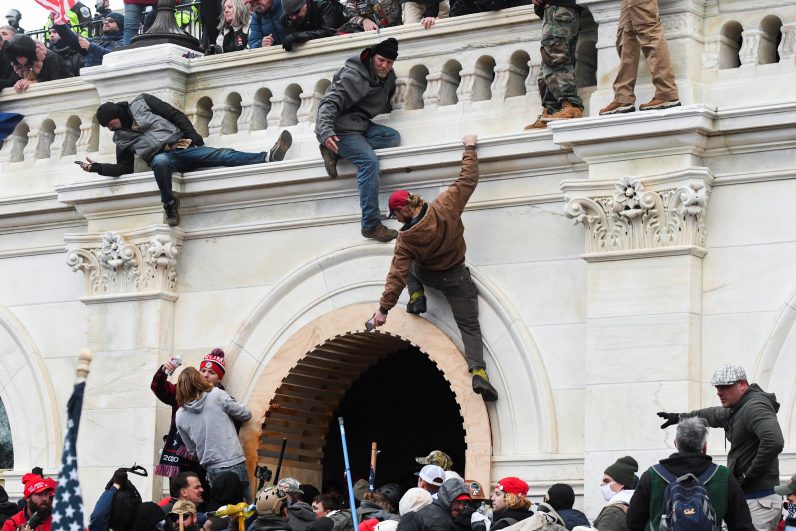 Supporters of President Donald Trump climb on walls at the U.S. Capitol in Washington Jan. 6, 2021, during a protest against Congress certifying the 2020 presidential election. (CNS photo/Stephanie Keith, Reuters)

NEXT: Archbishop Gomez condemns violence at Capitol, turns to Mary