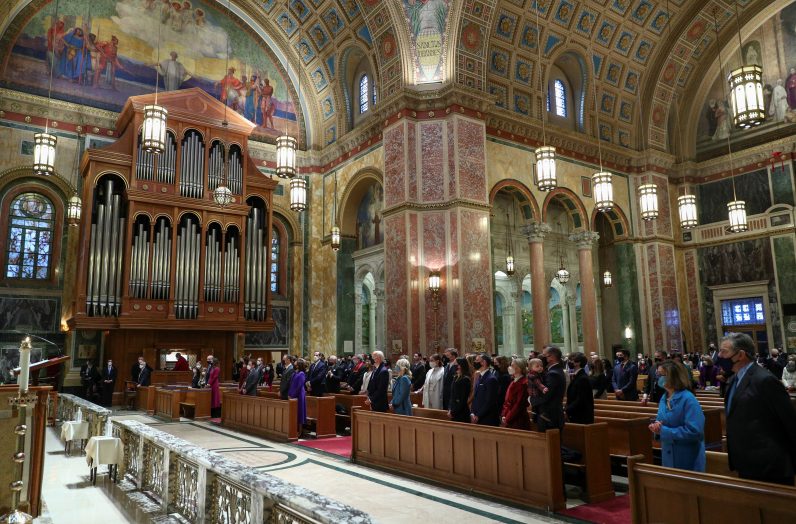 President-elect Joe Biden and his wife, Jill Biden, in second pew from right at far left, attend Mass before his presidential inauguration at the Cathedral of St. Matthew the Apostle in Washington Jan. 20, 2021. (CNS photo/Tom Brenner, Reuters)

WASHINGTON (CNS) — Hours before his inauguration as president, Joe Biden and incoming Vice President Kamala Harris were joined by the spouses and congressional leaders from both political parties for what was termed a Mass of thanksgiving early Jan. 20 at St. Matthew Cathedral in Washington.

Sen. Amy Klobuchar, D-Minnesota, tweeted, “Such an honor to be able to attend the inaugural church service this morning at the Cathedral of Saint Matthew. It is aptly called the ‘Mass of Thanksgiving.'”

In a tweet posted Jan. 20, Father O’Brien said: “My friends of ˜15 years, @JoeBiden & @DrBiden asked me to celebrate Mass for their family & friends at inauguration. I will offer the peace and support of prayer as the new admin tries to heal a divided nation. May God bless all public officials as they serve the common good.”

The Mass was considered private, and reporters were not permitted to cover it.

It had been a long-standing practice for incoming presidents to go to a prayer service at St. John’s Episcopal Church in Washington, at the edge of Lafayette Park across from the White House, on the morning of their inauguration.

Dubbed “The Church of the Presidents,” every sitting president has attended the church at least once since it was built in 1816, starting with James Madison. With the exception of Richard Nixon, every president since Franklin D. Roosevelt has attended spiritual services on Inauguration Day, many at St. John’s. It was designated a National Historic Landmark in 1960.

The church, though, gained a measure of unwanted notoriety last June when church workers and volunteers, who were distributing food and water to Black Lives Matters protesters at the park, were evicted by federal officers. During the protest, the church’s parish house was damaged by a fire.

Police and National Guard troops later used tear gas to clear out protesters so that outgoing President Donald Trump could pose for a photo in front of the church brandishing a Bible.

On Inauguration Day, Trump boarded Air Force One following a farewell ceremony at Joint Base Andrews in Maryland moments before Biden, the nation’s second Catholic president, and his wife, Jill, were seen departing Blair House to go to church.

In a Jan. 20 interview on CNN, incoming White House press secretary Jen Psaki said Biden understood that he was “about to take the oath of office to govern not just for the people who elected him, but the people who didn’t vote for him — the people who have opposed him and may continue to oppose him now.”

It was important to Biden, she said, that a bipartisan group of congressional leaders join him as “the beginning of a path forward” to national healing and political unity at the outset of his term.

“His belief is that as a leader, you have to extend a hand. You have to lead by example,” Psaki said. “And it felt important to him personally to have members of both parties with him this morning, and to use that as an example to the American public about ways that we can all come together. And he’s hopeful it will be the beginning of a path forward.” 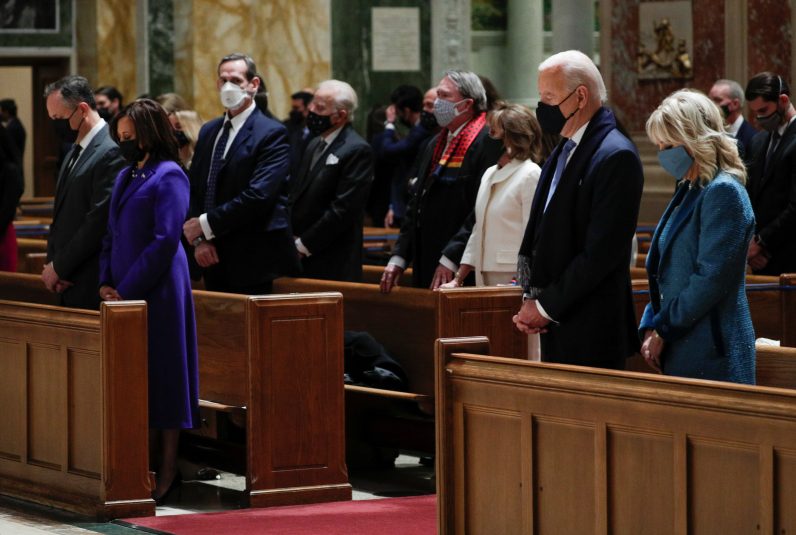 President-elect Joe Biden and his wife, Jill Biden, pray during Mass at the Cathedral of St. Matthew the Apostle in Washington Jan. 20, 2021, before his presidential inauguration. (CNS photo/Tom Brenner, Reuters)