Pandemic, Capitol violence change March for Life plans but not its commitment 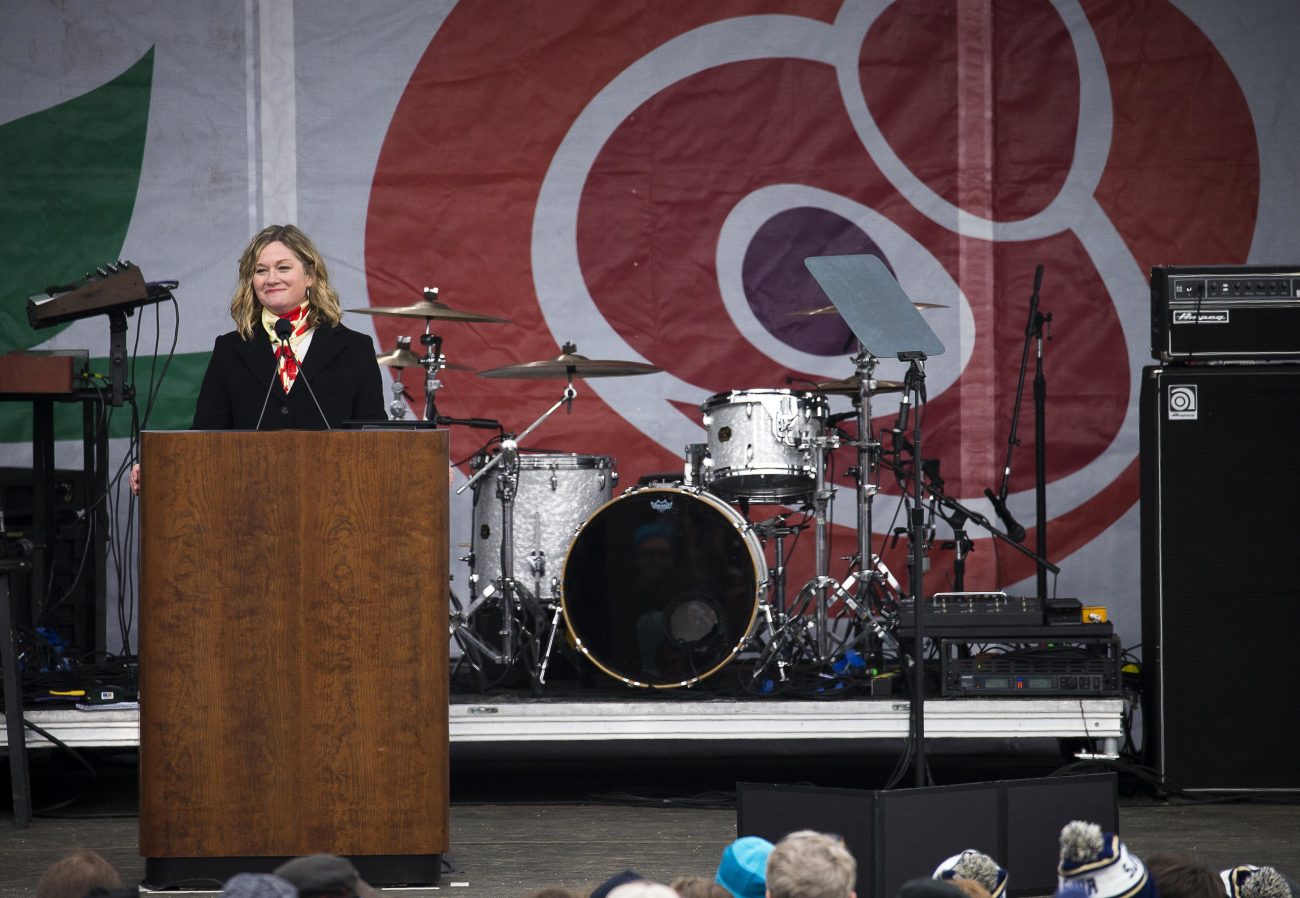 Jeanne Mancini, president of March for Life, speaks Jan. 18, 2019, during the annual March for Life rally in Washington. For the 48th anniversary of Roe v. Wade, the national March for Life scheduled for Jan. 29, 2021, will be virtual this year due to the COVID-19 pandemic, but pro-life advocates said while they were disappointed, they were not discouraged and planned to hold local events. (CNS photo/Tyler Orsburn)

WASHINGTON (CNS) — If all goes well Jan. 29, Jeanne Mancini, president of the March for Life Defense and Education Fund, and other pro-life advocates, including clergy, maybe some politicians and a handful of Knights of Columbus, will walk from the National Mall to the Supreme Court to carry out the march portion of the national March for Life.

They’ll constitute the smallest group that’s ever marched. Because Jan. 6, even more so than the COVID-19 pandemic, changed everything.

A symbol of continuity for the nation’s largest pro-life event, which will be entirely virtual for the first time, matters. But it also may stand as an act of courage greater than the first time Nellie Gray, founder of the march, stepped off the sidewalk on Jan. 22, 1974.

That first march was supposed to be a one-time event to protest the Supreme Court’s Roe v. Wade ruling, which legalized abortion the year before. The idea was to form a “circle of life” around the Capitol and Supreme Court.

Since it drew around 20,000 participants, Gray and the Knights of Columbus decided they could keep attracting public support for overturning the decision. By 1979, the march drew around 40,000, and not even a 1987 snowstorm slowed it down. That year the official tally march officials gave was 10,000.

Although their National Park Service permit application said 50,000 were expected for the rally, organizers of the event this year prepared for an event diminished considerably by the pandemic. The bus caravans from the Midwest that swelled participation to well more than 100,000 had been, for the most part, canceled, and plans were in place to require face masks, social distancing and hand sanitizer for the Mall rally before the march up Constitution Avenue to the Supreme Court.

Mancini also hired a production company to livestream all the speeches and interact with participants to give viewers “untethered access.”

But that’s just one aspect. The other requirement of the March for Life, not as well publicized since Mancini, who took over in 2013, enlarged it as an educational event for college and high school students, is that it be held on a day that Congress is in session.

It is meant to be seen and heard by lawmakers, and also for them to meet with marchers in their offices. Sometimes, members of Congress meet with entire state delegations.

That was the custom before Jan. 6, anyway. The aftereffects of the violence of the Capitol attack by insurrectionists trying to reverse the Electoral College certification of the presidential election are going to linger.

Decades of in-person Capitol Hill lobbying by advocacy groups now seem like a faraway time that’s unlikely to return anytime soon after the tall fences around the Capitol and Mall are taken down.

So when Mancini, in her red scarf that recalls Gray’s red overcoat, and her small group march, it will be not only with the expectation the pandemic will pass, but also in the hope that one awful day of violence won’t stop the march for more than a year.

Washington may not seem so much like a war zone Jan. 29, but a joyfully decorous and reverent street event the size of the March for Life is momentarily unimaginable given additional restrictions on size and security that could be imposed by the District of Columbia and National Park Service on such large gatherings.

Also ahead is a Biden presidency, the 10th in the life of the march. It’s also the first time in four years that the march has faced a Democratic administration that supports Roe v. Wade.

Like other advocacy groups, March for Life deals only with the political landscape in front of it after an election is decided. The new House of Representatives has a record 29 pro-life female members, all Republicans, according to the Susan B. Anthony List.

The most prominent at the moment is freshman Rep. Michelle Fischbach of Minnesota, who is scheduled to participate in a Students for Life virtual event along with Rep. Jeff Shipley of Iowa. Rep. Jim Banks of Indiana, beginning his third term, is participating in an online March for Life forum Jan. 28.

President Donald Trump, in 2020, became the first president to appear in person at the Mall rally, after having spoken through video hookup the previous two years.

Speakers over the past four years also included Vice President Mike Pence, who made his first March for Life appearance in 2002 as an Indiana congressman, White House counselor Kellyanne Conway, and, at the National Pro-Life Youth Summit last year, Russ Vought, director of the White House Office of Management and Budget.

Also last year, Attorney General William Barr stood on a balcony at the beginning of the march, attracting loud cheers.

One surprise that came from Health and Human Services Secretary Alex Azar at a Dec. 16 “Life Is Winning” event at the White House with Pence, was Azar saying he, too, had marched up Constitution Avenue in 2019. He joined an Orthodox Christian group.

Also at the event, Tom McClusky, March for Life’s vice president, praised Pence: “In the summer of 2016, (Trump) picked one of us (pro-lifers) to be our (nation’s) vice president. This is truly your legacy going forward, that is now our job to carry on.”

Some decisions from the Biden administration are predictable. Following the precedent of other Democratic presidents, he’s expected to quickly rescind the so-called Mexico City policy, which prohibits foreign organizations from using American aid money to promote abortion.

Harris uses the term “reproductive justice” and has proposed states that intend to add restrictions on abortion must have preclearance from the Justice Department to determine if the new laws are constitutional.

The Jan. 5 Senate election in Georgia saw the two Democratic candidates win, giving the Senate a 50-50 split between Republicans and Democrats, and Harris, who as vice president, is president of the Senate, would be the tiebreaker.

“So how do we position ourselves? We try to be open and welcoming to any administration. But we’re pretty well aware that this is not a friendly administration, and we have to work hard to protect the gains we’ve made.”

Those gains include the Supreme Court. One of Gray’s signature rally lines was “Just one more justice.” This year, hopes are placed on three justices Trump appointed: Neil Gorsuch, Brett Kavanaugh and Amy Coney Barrett. They anchor a 6-3 conservative court majority expected to eventually uphold state laws that, if not outright banning abortion, would severely restrict access.

Gray, a retired government lawyer, devoted herself to working to overturn Roe; she founded March for life as an organization in 1974. She took no salary and ran it from her Capitol Hill townhouse. In 2009, she reported a total revenue of just over $200,000.

After her death in 2012, the march moved into a suite of offices on 14th Street, added March for Life Action, a political arm headed by McClusky which offers voting scorecards on pro-life issues, and now has a paid staff of 10 and a budget of more than $2 million, most of which comes from donations.

Participants can do their lobbying online this year through the March for Life website, sending emails that go straight to lawmakers’ inboxes, and, McClusky promised, “we will print out your message in the form of a letter and hand deliver a hard copy to Capitol Hill.”

The Basilica of the National Shrine of the Immaculate Conception in Washington will not be open to the public that weekend, but in addition to the televised Mass for Life that begins Jan. 28 at 8 p.m., bishops nationwide will hold a prayer vigil, taking turns leading livestreamed holy hours every hour on the hour. Those will be available on the website of the U.S. Conference of Catholic Bishops.

The principal celebrant and homilist for the opening Mass will be Archbishop Joseph F. Naumann of Kansas City in Kansas, who chairs the U.S. bishops’ Committee on Pro-Life Activities. The vigil will conclude at 8 a.m. Jan. 29 with Mass celebrated by Archbishop William E. Lori of Baltimore.

More information about this year’s March for Life events is available online at www.marchforlife.org.

PREVIOUS: ‘9 Days for Life’ novena for the protection of human life set for Jan. 21-29

NEXT: At national memorial, Cardinal Gregory prays for all who died of COVID-19