Pro-life witness is rooted in the Eucharist, Archbishop Lori says 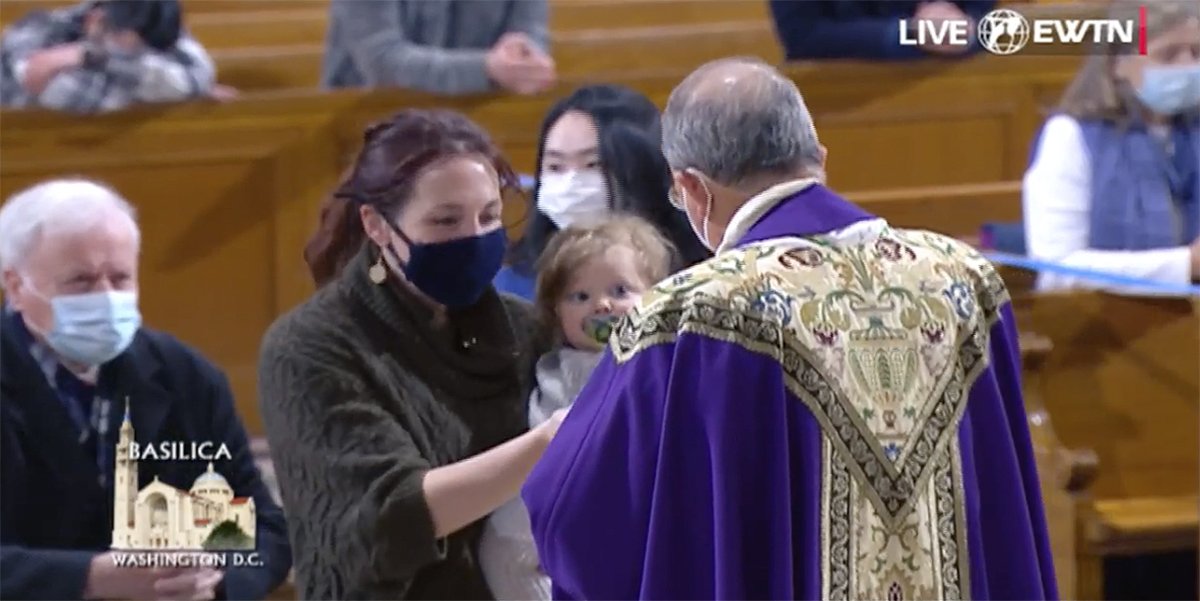 This is a screen grab of Baltimore Archbishop William E. Lori distributing Communion during the closing Mass of the National Prayer Vigil for Life at the Basilica of the National Shrine of the Immaculate Conception in Washington Jan. 29, 2021, amid the coronavirus pandemic. (CNS screen grab/EWTN Broadcast)

WASHINGTON (CNS) — The witness of the pro-life movement is rooted in the Eucharist, said Archbishop William E. Lori of Baltimore.

“The Eucharist unites and strengthens us in our efforts to secure justice for the unborn, and to create a culture wherein every human life is cherished, nurtured and protected from the moment of conception until natural death,” said Archbishop Lori, chairman-elect of the U.S. bishops’ Committee on Pro-Life Activities.

“All these extraordinary efforts, in the midst of this pandemic, testify to the importance of anchoring our pro-life mission in the Eucharist,” Archbishop Lori said in his homily at the Jan. 29 closing Mass of the National Prayer Vigil for Life at the Basilica of the National Shrine of the Immaculate Conception in Washington.

“Eucharistic adoration followed by the celebration of Holy Mass is like a school that forms and equips us to place our humanity at the service of the least of these, the tiniest of human beings and the most vulnerable of all,” the archbishop said.

In his homily, Archbishop Lori brought the words of St. Paul to “have no anxiety” into topical focus.

“We might be tempted to say, ‘St. Paul, are you kidding? Have you seen the executive order rescinding the Mexico City policy? Do you know that the cancel culture portrays pro-life advocacy as hate speech?'” he said.

“Friends, I’d suggest that we give St. Paul more credit than that,” Archbishop Lori added. “His encouragement should be ringing in our ears as we march for life — if only virtually.”

Anxiety, he said, “betokens a lack of trust in the Lord and his providential love. It suggests that we are in charge, more like independent contractors than disciples. Anxiety frays our relationships with others, including our pro-life partners, and corrodes that unity so necessary if the pro-life cause is to succeed.

“Anxiety incites us to engage in behaviors counterproductive to the cause of life, and, worst of all, it hinders us from discerning the Lord’s will amid the challenges we face.” 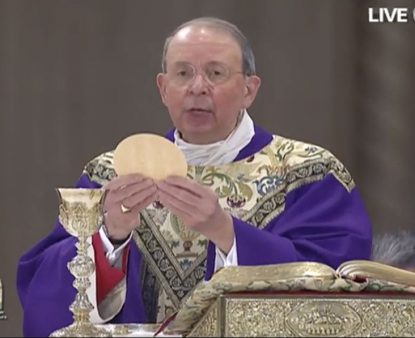 This is a screen grab of Baltimore Archbishop William E. Lori celebrating the closing Mass of the National Prayer Vigil for Life at the Basilica of the National Shrine of the Immaculate Conception in Washington Jan. 29, 2021, amid the coronavirus pandemic. (CNS screen grab/EWTN Broadcast)

God has not abandoned anyone, Archbishop Lori said, but “remains with us, most especially in the Eucharist, and he continues to exercise the power of his love in our midst to this very day. That very fact should not only console us but also embolden us to pray and work for the cause of life perhaps as never before.”

He added, “Our culture gives a lot of credibility to science. Well, science attests to the humanity of the unborn child, psychology attests to the interior pain often associated with procured abortions, while almost everyone has a soft spot in their hearts for a newborn child.”

Reflecting on the Gospel passage from John 14, Archbishop Lori said, “Make no mistake: We do not manufacture the peace of Christ. … The peace of Christ is not a mere good feeling, but is rather the amazing experience of a love that is stronger than sin and death.”

“Our mission,” he said, “is not to preach to ourselves but to connect with and speak persuasively to those who have not yet understood the truth, justice, and love of our cause,” he continued. “Our mission is to reach those who are searching, because at some level, they understand the stunningly beautiful truth about the inviolable dignity of each human being.”

The streaming numbers on the basilica’s YouTube channel, compared to the crowds that would pack the basilica in normal years, with no pandemic, were even more meager than those for the opening Mass of the vigil the night before.

There were just 108 viewers when the bells rang signaling the start of Mass, although the number climbed to 369 by the time Archbishop Lori gave the final blessing. The latter number, though, was less than half that viewing the start of the vigil’s opening Mass.