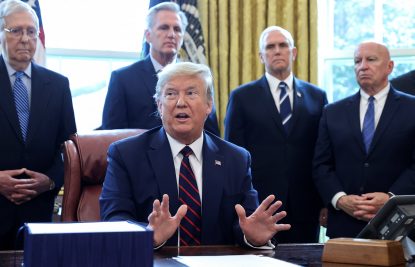 President Donald Trump is seen March 27, 2020, before a bill signing at the White House in Washington. On Jan. 13, 2021, he signed the “Special Envoy to Monitor and Combat Anti-Semitism Act,” creating an ambassadorial post for the job. (CNS photo/Jonathan Ernst, Reuters)

WASHINGTON (CNS) — President Donald Trump, a week before leaving office, signed into law a bill that elevates to a full ambassadorship the rank of a special envoy to monitor and combat anti-Semitism.

The bill, sponsored by Rep. Christopher Smith, R-New Jersey, also prevents the ambassador-at-large from being saddled with duties irrelevant to combating and anti-Semitism, or being conferred with other positions or responsibilities that distract from the central focus of anti-Semitism.

In a Jan. 14 statement, Smith said the ambassador-at-large will report directly to the secretary of state. “The official rank of ambassador comes with greater seniority and diplomatic access not only here in Washington, but equally important, overseas in dealing with foreign governments,” he added. “In short, it gives the special envoy the clout required do the job more effectively.”

A bipartisan, bicameral team of lawmakers voted for the bill. Final approval came Dec. 16 in the Senate.

“Anti-Semitism is on the rise in many countries around the globe over the past 10 years. We’ve seen members of the Jewish community harassed, intimidated, assaulted and even killed. We’ve seen sacred places like synagogues and graves desecrated,” Smith said.

“We’ve heard the use of anti-Semitic slurs and threats, and the open targeting of the state of Israel with what the great Soviet refusenik and former religious prisoner Natan Sharansky told me are the ‘three D’s’ — demonization, double-standards and delegitimization of Israel.

“With the rise of online anti-Semitism, hate abroad knows no borders and poisons our communities here at home. We need to integrate our efforts both in the United States and abroad to stop the hate and keep our communities safe,” Smith said.