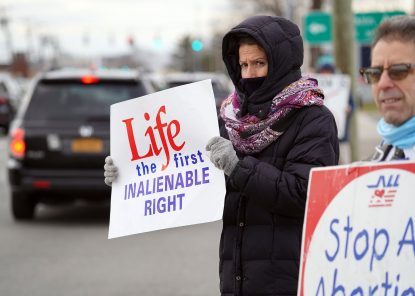 Pro-life advocates participate in an annual Roe v. Wade memorial vigil outside Nassau University Medical Center in East Meadow, N.Y., Jan. 17, 2021. The event, promoted by the Long Island Coalition for Life, was held five days in advance of the 48th anniversary of the U.S. Supreme Court decision that legalized abortion across the nation. (CNS photo/Gregory A. Shemitz)

WASHINGTON (CNS) — Even though “peaceful prayer and witness” will take place in a different format due to the ongoing pandemic, it “must and will continue this year” to mark the 48th anniversary of the Supreme Court’s Roe v. Wade decision legalizing abortion, said the chairman of the U.S. bishops’ pro-life committee.

This year’s national rally and march is planned for Jan. 29, but it will be livestreamed, with pro-life advocates across the country asked to participate virtually.

“As longtime participants in the annual March for Life, my brother bishops and I commend the march organizers for their concern for the lives and safety of all participants. The countless, peaceful, pro-life marchers who would normally gather each year should not be put at risk,” said Archbishop Joseph F. Naumann of Kansas City, Kansas, who heads the U.S. Conference of Catholic Bishops’ Committee on Pro-Life Activities.

In a Jan. 19 statement, he said he has “the honor this year of opening the March for Life Virtual Rally in prayer, so please join me at https://marchforlife.org/2021-virtual-events.”

The March for Life is usually held in Washington every January on or around the Jan. 22 anniversary of Roe.

Many of the bus caravans from the Midwest, long a staple of the event, were canceled last fall as a result of the pandemic, and the assault on the U.S. Capitol Jan. 6 and threats of subsequent violence by domestic terrorist groups, as reported by the FBI, made security impossible for holding such a big gathering this year.

On Jan. 15, Jeanne Mancini, president of the March for Life Defense and Education Fund, announced the changes in the event.

She said she and a small group of other pro-life advocates, including clergy, maybe some politicians and a handful of Knights of Columbus, will walk from the National Mall to the Supreme Court to carry out the march portion of the national March for Life.

This year’s the National Prayer Vigil for Life, always held the night before the march, also will be virtual. It will begin with a live broadcast at 8 p.m. (EST) Jan. 28 from the Basilica of the National Shrine of the Immaculate Conception in Washington, starting with the praying of the rosary followed by Mass.

Bishops from across the country will leading Holy Hours throughout the night in the livestreamed vigil.

Archbishop Naumann will be the principal celebrant and homilist for the opening Mass. The vigil will end at 8 a.m. Jan. 29 in a closing Mass celebrated by Archbishop William E. Lori of Baltimore.

The National Prayer Vigil for Life is hosted by the USCCB’s Secretariat of Pro-Life Activities, the Basilica of the National Shrine of the Immaculate Conception, and The Catholic University of America’s Office of Campus Ministry.

“In preparation for the virtual March for Life, and in observance of the annual Day of Prayer for the Legal Protection of Unborn Children on Jan. 22, I invite you to join many thousands of Catholics praying a nationwide novena” Jan. 21-29, Archbishop Naumann said his statement. “Please join us in prayer.”

Participants in the novena can receive daily intentions, brief reflections and suggested actions — in English or Spanish — by signing up here for “9 Days for Life.” The novena is sponsored by the USCCB Committee on Pro-Life Activities.

Dioceses nationwide are livestreaming Masses, rosaries, Holy Hours and more for the protection of human life as part of this novena, which the USCCB called “an opportunity for recollection and reparation” in observance of the Roe anniversary. “The overarching intention of the novena is the end to abortion,” it said.

Participants can share their pro-life witness and invite their social networks to pray on social media with the hashtag #9DaysforLife.

“Now, more than ever, our nation is in need of prayer for the protection of the unborn and the dignity of all human life,” Archbishop Naumann said in an earlier statement.