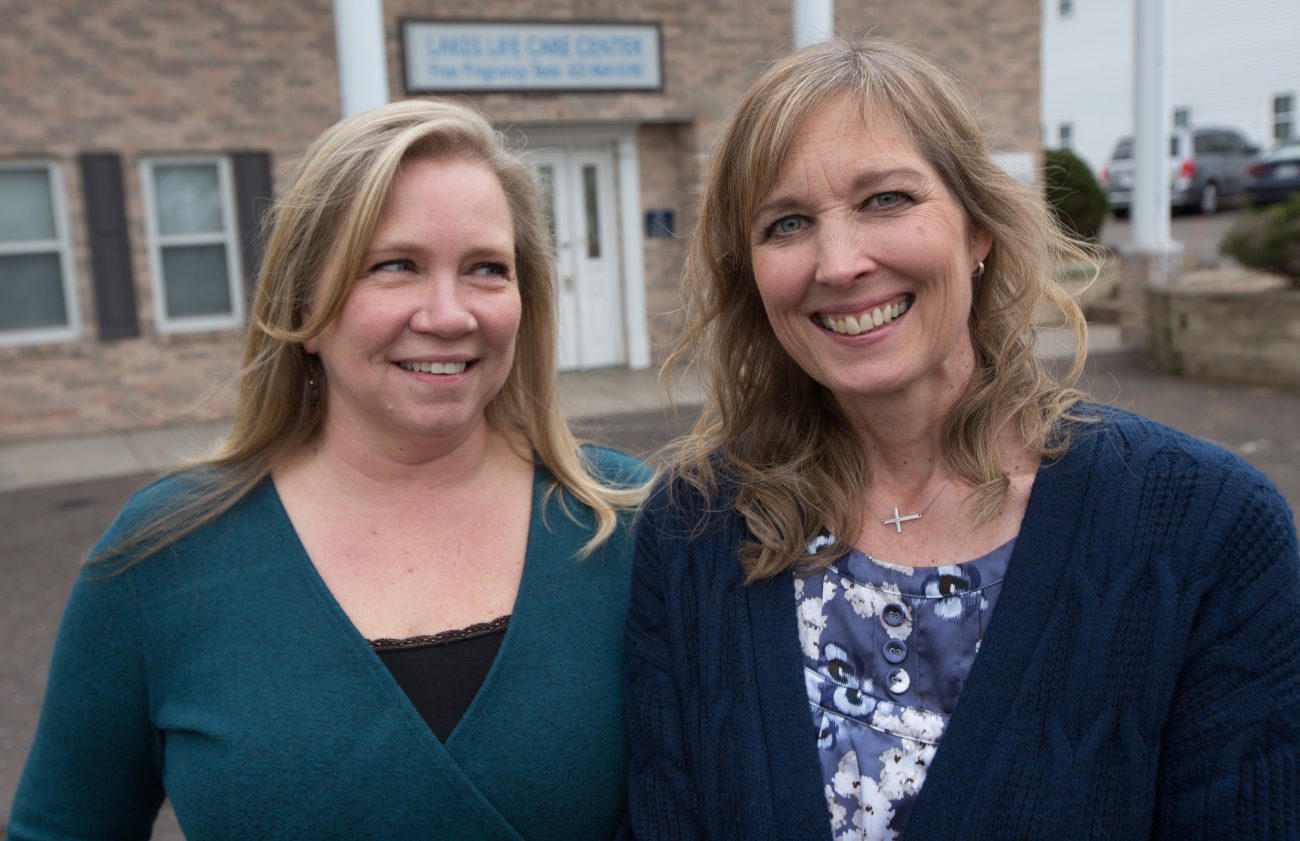 ST. PAUL, Minn. (CNS) — Jill King remembers her roommate 30 years ago calling her into the bathroom of their apartment. Carla Stream was sitting on a chair, wrapped in a towel.

Stream thought she would have to move out. King wanted to help.

“It was my first experience living away from home,” King, 52, told The Catholic Spirit, newspaper of the Archdiocese of St. Paul and Minneapolis. “I thought, ‘I’m a big adult girl, I can take care of my friend.'”

King said she was raised in a faith-filled, Christian home, but unexpected pregnancy and abortion were not topics of discussion. Absorbing the news, trying to find a solution, the women turned to the phone book. King recalls many entries under “pregnancy” offering abortion services and clinics — but not much else.

“‘I can help you,'” she told her friend of the abortion option. “‘I can take off of work.’ I told her I’d taken other people before, maybe to help her feel better about it. It was a lie.”

King had never taken anyone to have an abortion. Nonetheless, she did take a day off that September in 1990, so she could drive Stream from their apartment in White Bear Lake, Minnesota, to an abortion clinic in Minneapolis. She remembers what it felt like in the reception area, seeing a visibly pregnant girl, crying with her mother, and thinking, “We’re the smart ones; we’re (obtaining an abortion) before (the baby) shows.”

In that moment, 17 years after the U.S. Supreme Court’s Jan. 22, 1973, Roe v. Wade decision legalized abortion across the country, King was led with Stream into a room where they watched a video showing a cartoonish figure of a cluster of what looked like red grapes. This is your baby, people at the abortion clinic told those gathered.

“They show you that to demonstrate it’s OK; it’s not human yet,” King said. Another lie.

Stream, 55, recalled feeling lonely, desperate, fearful and anxious about being pregnant. She had not grown up in a loving home. As a young adult, she filled that void with partying and dating. Her mother had once paid for her sister to have an abortion. She had friends in college who had had abortions.

And in Stream’s mind, the baby’s father was out of the picture, a casual acquaintance from time she spent as a nanny out East, before returning to Minnesota and finding an apartment with King.

“I felt I needed to make a decision,” Stream said. “Jill said she would drive.”

That fatal decision ended the life of Stream’s child and split their friendship, and it has affected other relationships over the course of their lives, Stream and King said.

The abortion began a trail of pain that only through God’s grace and forgiveness led both to strong marriages, children who know their stories and long-standing, pro-life advocacy roles neither would have imagined.

Stream is a former teacher of middle-school children with learning disabilities who works data entry at home, takes speaking engagements to tell her story and helps the pregnancy resource center near her home in Hudson, Wisconsin.

She served five years on the board of directors of King’s pregnancy center and organizes a group of volunteers who once a month pray in front of Planned Parenthood in St. Paul.

Neither are Catholic, but both respect and rely on the strong pro-life advocacy work and support of the Catholic Church. They bring the same determination to their Christian communities, in hopes of shaping lives and changing minds about abortion.

A Catholic led The Catholic Spirit to their experiences. Mary Stolz, 59, a nurse and member of St. Peter Parish in Forest Lake who has volunteered at Lakes Life Care Center and served on its board for more than 30 years, said she wants people to know the harm abortion does to people’s lives. She sees it all too often.

“What I’ve discovered is there is so much brokenness, and so much hurt,” Stolz said. “By the time they come here, this is just one of many things in their lives that are so difficult.”

She recalled talking for 90 minutes in the center with one young woman whose baby was nine weeks along. The center’s director of client services followed up with a couple of telephone calls; the first time the woman hurried to get off the phone, saying, “I can’t talk right now,” and the second time she hung up without speaking, Stolz said. People at the center don’t know what happened to the woman or her child, she said.

“I’ve never met someone who really wants an abortion,” Stolz said. “They just feel painted in a corner.”

“The abortion was the most horrifying experience of my life,” Stream told The Catholic Spirit. “And the pain … I’ve had four kids without drugs, and I’ve never felt anything like that.

“I was brought to the recovery room and given a warm blanket and peanut butter and jelly toast. I felt relief but only because it was done. I looked at all the other girls, all crying. One was holding her stomach, rocking back and forth, saying, ‘My baby, my baby.'”

Afterward things were not the same between Stream and King. They parted ways, and traveled different paths. But in 2010, they found each other again.

King and Stream believe God’s grace brought them to the same place of healing and help to others. It took a long time and a lot of work, they said, but each found help.

In 2010, Stream heard from King through Facebook. King said she reached out to Stream two or three months after she began working at Lakes Life Care Center, in part to let Stream know she was doing better.

The center offers services including ultrasounds, sexually transmitted disease testing and classes to help mothers facing unexpected pregnancies understand what is happening in their bodies and prepare to raise a child.

“We got together,” King said. “I had the opportunity to seek forgiveness for what I had done. She is a sidewalk counselor, a prayer warrior. We just laughed. … It meant everything. I think it really solidified in me the forgiveness part of it. She’s OK, and (I know) she doesn’t hate me. Because she could. But she doesn’t.”

Now, the two women sometimes tell their stories together.

Stream said the most important thing in her healing were Rachel’s Vineyard weekends, Catholic-based retreats for men and women seeking to recover from the trauma of abortion. She began attending in 2009.

“It was for me a hugely important part of my healing from abortion,” Stream said. “I have never felt a safer place to share. You sit with people and their pain, sorrow and grief, and work through Scripture and apply God’s word to what you’ve been through.”

Stream’s experiences have been included in friend-of-the-court legal briefs and testimony for pro-life legislative efforts around the country.

“It is the No. 1 human rights abuse in terms of numbers,” Stream said of abortion. “We have thousands of babies made in the image of God who are not here.”