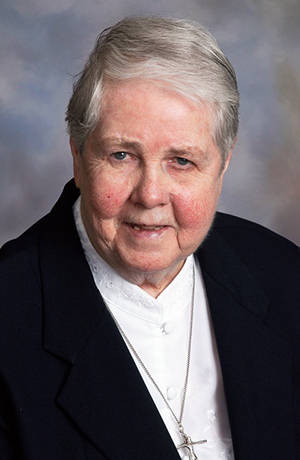 Theresa Anne Ryan was born in Philadelphia, the daughter of William and Catherine (Delaney) Ryan in St. Bernard Parish, Philadelphia. She graduated from the parish school and attended St. Hubert High School, from which she graduated in 1951.

She entered the Sisters Servants of the Immaculate Heart of Mary in 1951. She received her religious habit and religious name, Sister Dolorine Marie, in 1952, and pronounced first vows in 1954. She earned her degree in elementary education from Immaculata College.

Shortly after making first vows, Sister Dolorine began an extensive teaching ministry beginning at St. Joan of Arc School in Philadelphia then in many schools in the Philadelphia, Shenandoah, Newtown, Virginia and Connecticut areas through 1996.

From that time until 2012, she remained in education but served as a general office assistant, primary aide/tutor and general assistant with school and development activities.

Later in 2012 Sister Dolorine served at the congregation’s Motherhouse at Villa Maria House of Studies until 2018, where she continued serving as a member of the Apostolate of Prayer at Camilla Hall.

She is predeceased by her parents, her brothers Father William F. Ryan and John Ryan, and her sister Jane Dietrich. She is survived by many loving nieces, nephews, grandnieces, grandnephews and her congregation of I.H.M. Sisters.

The funeral Mass was celebrated Dec. 31 with Norbertine Father Maurice Avicolli as the celebrant.